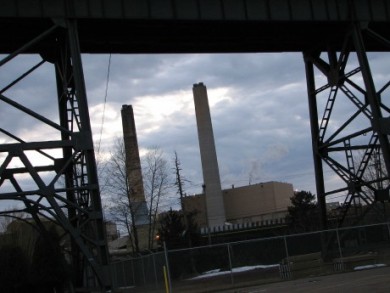 Presque Isle plant in the U.P. Photo by Kari Lydersen

An official from Gov. Rick Snyder’s office says that We Energies is “double-dipping” by collecting a ratepayer subsidy to keep a power plant open in Marquette while also collecting rates from a returned industrial customer whose previous departure was one of the reasons We Energies got the subsidy in the first place.

In fact, Brader believes that the company may be “triple-dipping” by recovering costs as part of the System Support Resource (SSR) payments that We Energies is receiving to keep the troubled plant open. The state does not believe We Energies is actually incurring all the costs it is being reimbursed for, Brader said.

“I personally don’t understand why they are triple-collecting,” Brader said.

The dispute comes less than a month after top statewide officials announced a tentative deal among several parties — in which We Energies plays a central role — to resolve serious reliability concerns facing the Upper Peninsula. The parties have agreed to finalize those plans by July.

Cliffs Natural Resources, a U.P. mining company and major user of electricity from the Presque Isle Power Plant in Marquette, stopped being a We Energies customer two years ago under Michigan’s electric choice law.

Cliffs’ decision in 2013 meant an uncertain fate for Presque Isle and U.P. ratepayers, as We Energies sought to close the plant but was not allowed to because of reliability concerns. Cliffs makes up 85 percent of Presque Isle’s load.

The plant stayed open with the SSR payments, which are now about $8 million a month.

On Feb. 1, however, Cliffs returned to We Energies as a customer.

The state contends that the SSR payments should have stopped then. The Michigan Public Service Commission has ordered We Energies to formally respond to the state’s assertion by Feb. 25.

“It is not” double-dipping, countered We Energies spokesman Brian Manthey. The company says that because there is no “long-term” requirement for Cliffs to stay with them, the utility may be once again on the hook for keeping the plant open.

Additionally, Manthey said, the SSR payments are going into an escrow account and an as-yet undetermined amount could be redistributed to ratepayers once the Federal Energy Regulatory Commission settles cost allocations.

“The mines could leave at any time, leaving other customers at risk,” Manthey said, referring to the company’s ability to exercise customer choice again. “Without a long-term agreement over an extended period of time with the mines, they could potentially leave. We feel the SSR should stay in place at this point because they are not committed.”

Cliffs reportedly saved an estimated $25 million annually when it left We Energies for Chicago-based Integrys. A Cliffs spokeswoman said last month that the company returned to We Energies to “be part of the solution” in the U.P.

Manthey declined to discuss the terms of the new rate plan.

Michigan’s 2008 customer choice law caps choice for customers at 10 percent of a utility’s load. It is a sort of hybrid between regulated and deregulated markets and there is currently a waiting list for customers who want to participate.

However, an exemption in that law allows for any iron ore mining or processing facility in the U.P. to exercise choice.

Meanwhile the debate over SSR payments may only be relevant for another five months. Last month a tentative deal was brokered involving several companies and utilities that would keep Presque Isle open and end the need for SSR payments.

That deal, which is to be finalized no later than July, includes the Upper Peninsula Power Company (UPPCO) agreeing to buy Presque Isle and other We Energies assets in the U.P. Cliffs would then become an UPPCO customer while it builds its own co-generation natural gas plant for its mining operations.

Midwest Energy News reported in January that Cliffs would be returning to We Energies on Feb. 1 as part of this deal. But more recently, Brader and Manthey said that was not part of the months-long negotiations and not part of the state’s official announcement.

“They did that separately,” Manthey said.

According to a report in the Marquette Mining Journal on Monday, Cliffs’ decision to go back to We Energies from Integrys “was based less on the agreements recently announced by the governor [involving We Energies and UPPCO] and more on securing stable, reliable power rates and hopefully eliminating the prospect of more subsidy charges to ratepayers by We Energies.”

Cliffs spokeswoman Patricia Persico could not be reached for comment.

We Energies maintains that it still needs the SSR to keep the Presque Isle plant running and serve its customers. We Energies is scheduled to go before the Michigan Public Service Commission (MPSC) on Feb. 25 to make its case.

“There are regulated customers paying for that plant today,” said MPSC Chairman John Quackenbush in an interview. “To say that some of those same costs already being recovered are justification for an SSR payment to me says there is double recovery going on.”

At a state House Energy Committee meeting in Lansing on Wednesday, Brader told lawmakers that she is confident that the latest dispute will not sideline the in-the-works long-term solution to the U.P’s power crisis.

“It doesn’t impact the deal at all,” she said. “In the meantime, Michigan’s position is that those [SSR] payments are still too high and unjustified.”

Manthey agrees that the long-term solution will still work out for the U.P.

“We think that plan and the governor’s efforts on that were really outstanding,” he said. “It’s great they brought all the parties together to work on a solution that will help the long-term reliability in the Upper Peninsula.”