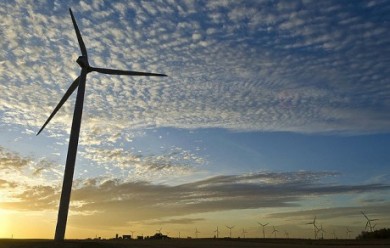 What happens when the wind doesn’t blow?

That’s a question that wind power skeptics or critics frequently ask. While coal, nuclear and gas plants theoretically run uninterrupted whenever they are called upon, humans have no control over when wind turbines stop and start spinning. Some utility and power company officials say this is a reason that “reliable,” baseload power should be valued more than wind.

But in a report released Thursday and an accompanying webinar, experts with the American Wind Energy Association (AWEA) explained how wind can actually be seen as a more reliable source than conventional power plants — one that contributes to rather than inhibits the stability of the grid as a whole.

This is good news given that wind is considered a lynchpin of meeting the Environmental Protection Agency’s carbon reduction goals in the Clean Power Plan. No one disputes that wind is a zero-carbon and low-cost source of energy, but AWEA’s report underscores that it is also a reliable way to “keep the lights on.”

The truth about variability

Overwrought concerns about wind’s reliability often center on a fundamental misunderstanding of how the grid works, the report indicates. Since its inception more than a century ago, the grid has inherently handled a constant flux of supply and demand. All power sources involve some level of variability, and demand can vary greatly minute by minute. For example, AWEA points to energy demand during a 1990 World Cup game between England and Germany when demand spiked sharply during breaks, presumably as people quickly turned on appliances or electronics then turned them off once the game resumed.

Fluctuations in supply or demand from any given source do not matter to grid operators, said report author and AWEA research director Michael Goggin. All they care about is the total supply and demand on the grid at any given moment. As the AWEA report puts it, “The total variability is far less than the sum of its parts.”

“Grid operators only care about total variability on the power system,” Goggin said. “They don’t care what any one wind plant is doing or even what all wind plants are doing.”

Hence variations in the level of wind energy output are easily smoothed out over the grid as demand also rises and falls frequently and often unpredictably, and as output levels from other energy sources fluctuate. And the more wind power is added to the grid, the less variable wind energy as a whole becomes.

Wind output variations “are being canceled out by totally unrelated changes in supply and demand,” Goggin said. “What happens is you get a very smoothed-down profile across all these sources of variability.”

Goggin said that the variable output of wind is actually in some ways less problematic than variability from conventional power plants. That’s because changes in wind energy can be predicted in advance with considerable accuracy, whereas an outage at a power plant is usually sudden, unexpected and involves a more drastic reduction in power.

Since wind’s variability is more predictable and involves a smaller amount of megawatts than the potential variability of power plants, less reserve electricity is needed on hand to guard against wind variability. The AWEA report cites data from Texas’ grid operator ERCOT showing that the need for wind reserves adds an extra four cents to utility bills, compared to 76 cents as a hedge against power plant outages.

The report notes that wind variability does increase the need for more slower-acting reserves, but those reserve sources of power are less expensive to have on hand than fast-acting reserves.

“Conventional power-plant failures most often happen in a fraction of a second with no warning; the variability of wind is both gradual and predictable,” Goggin said. “Gradual changes in wind output are relatively easy for grid operators to accommodate. On the other hand, rapid changes in electricity supply caused by traditional power plant failures require very fast-acting reserve generation. Twenty-four-seven, you don’t know when a traditional power plant will go down. With wind you can do forecasting, you know tomorrow between 2 or 3 p.m. there will be a reduction.”

The AWEA report indicates that focusing on the need for large amounts of “baseload” power is misleading. A better way to understand the system, AWEA says, is to break down the grid’s needs into three components: energy, capacity and flexibility. Energy is the actual megawatt hours of electricity flowing on the grid, capacity is the ability to generate more when needed, and flexibility is the ability to respond quickly to rises or dips in demand.

Wind is the lowest cost source of generation on the grid. And it could provide flexibility, although that would entail intentionally keeping wind resources offline so that they could be called on to quickly increase electricity availability when needed. Since wind is such a low-cost power source, it would generally not be economically wise to do this. Though as more wind power capacity is added, there’s greater chance that it would make sense to use some of it for flexibility.

“If you provide flexibility, you need to reduce the amount of energy you’re providing” during “normal” operations, Goggin said. “It’s not worth reducing low-cost resources to do so. Wind can provide flexibility but you would have to throw away zero-cost energy.”

With sophisticated electronics, wind turbines also have an impressive ability to control the voltage at which they feed power onto the grid and to “ride through” disturbances in the flow of electricity on the grid, Goggin said.

There has been much attention paid to efforts to develop more energy storage on the grid. This is considered an important way to increase the grid’s efficiency, reduce the need for baseload coal or nuclear plants and help shift the grid toward a more decentralized and nimble system. But Goggin said the idea that more energy storage is crucial to increasing wind capacity is a fallacy. The report notes that all power sources on the grid essentially act as storage, since taken together they compensate for the fluctuations or failings of other sources.

Demanding more storage on the grid specifically to accommodate wind farms would be akin to placing a battery between the grid and your house to make sure that your house draws the same amount of energy from the grid at all times, Goggin said.

“It would be highly inefficient and counterproductive to have a dedicated resource accommodating fluctuations in the electricity demand at your house, as nearly all of those changes are canceled out anyway by other changes on the aggregate grid,” the AWEA report says.

Wind on the rise

The report notes the strikingly large amounts of wind energy that are already being used in some states. In 2013, Iowa and South Dakota both got more than a quarter of their energy from wind and nine states got more than 12 percent. Texas got 10 percent of its energy from wind last year, an amount expected to increase to 15 or 20 percent by 2017.

Wind provided crucial power during the “polar vortex” last winter that saw coal plants shutting down and natural gas supplies interrupted as gas pipelines were overwhelmed delivering fuel for heat. Wind’s reliability during that crisis saved ratepayers in the PJM alone more than a billion dollars compared to the cost of generation that would have been tapped otherwise, AWEA says.

As wind energy continues to expand, arguments against reliance on wind energy and tax supports for wind farms are likely to continue. The report notes that no “rational voice” would advocate 100 percent of the nation’s or a region’s power come from wind energy — or any single source for that matter. Hence fears about the grid challenges that would arise with such reliance on wind represent a “strawman argument,” AWEA says.