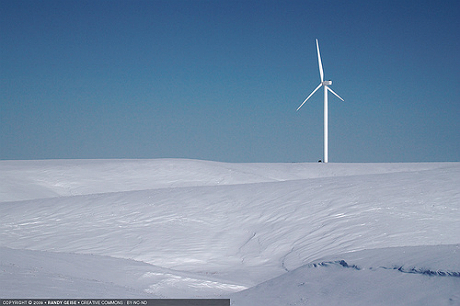 When wind-farm developers look for a promising site for new turbines, they usually bypass windblown South Dakota in favor of North Dakota, Minnesota or Iowa.

The tax burden in South Dakota, it turns out, makes the neighboring states look like bargains.

Adam Sokolski, the manager of regional market structure and policy for wind farm developer Iberdrola Renewables, has done the math. He concluded that the state taxes on a 100 MW wind farm operating for 20 years would amount to $8.9 million in North Dakota, $9.6 million in Minnesota and $13.9 million in South Dakota.

He called South Dakota’s tax burden nothing short of punitive.

Chris Kunkle, a regional policy manager for Wind on the Wires, an organization that lays the technical and policy groundwork for more wind energy, concurred on that point.

“From what I hear,” he said, “the tax climate is one of the biggest, if not the biggest, problem in South Dakota now.”

In response, the South Dakota wind industry crafted a bill, introduced in the legislature last week, that effectively would cut the tax imposed on wind energy production. Sokolski calculates that the proposed formula would reduce taxes due on a 100 MW wind farm over 20 years from $13.9 million to $8.8 million, putting South Dakota more in line with neighboring states.

Paul Bachman, executive director of the South Dakota Wind Energy Association, said he studied wind-energy development in South Dakota and neighboring states over the past couple years, and “saw that South Dakota was only getting a very small percentage of overall development.”

Despite ranking fifth among U.S. states for wind energy potential, South Dakota ranks only 20th for installed capacity, according to the American Wind Energy Association.

“It was not what you would expect,” Bachman said. “That was what lead us to ask our members, ‘What is this?’”

He found that one of the major reasons for the lack of development was the state’s gross receipts tax. In 2007, the South Dakota Legislature passed a bill instituting a new taxing structure for wind energy. Instead of each county imposing a separate and possibly different property tax on wind farms, the legislature decided to replace county-based property tax with a statewide “gross receipts tax.” A production tax, in fact, it assesses a 2 percent tax on each megawatt hour (MWh) of electricity produced.

A MWh of wind energy in 2008 sold for $47.50. The bill included an escalator which assumed the price of wind power would steadily increase. To reflect that presumed price increase, it locked in a 2.5 percent annual increase in the base MWh price on which the 2 percent tax would be calculated.

As Kuhlke recalls, the escalator was added in order to keep the tax receipts in line with property tax policy at the time. The 2.5 percent annual increase in the base rate “was due to where prices were in 2008, and the expectation of where prices would go,” he said.

The price of South Dakota wind energy, however, did increase as projected.

Seven years after its passage, the escalator now imposes the 2 percent tax on an assumed selling price of $56.46  per MWh, according to Kuhlke. Currently, he said, wind energy in the upper Midwest fetches closer to $30 per MWh.

And given that power purchase agreements typically are in effect for a couple of decades, he said, wind developers worry that they would be locking themselves into further shrinking revenues in the face of growing taxes.

Senate Bill 180 is designed to fix that. It would eliminate the escalator, and set the base price lower than it was even at the start of the current taxing system in 2007. Wind farms producing power for the first time no sooner than July 1, 2015 would pay 2 percent of their revenues based on a sales price of $35 per MWh. That presumed sales price would not change.

The bill would continue the current policy of offering substantial tax rebates for developers who need to invest in transmission lines or wind farm collector systems to do business.

Although on its face, the proposed change seems like it might reduce tax revenue for the state, Bachman noted that, “Five percent of something is worth a lot more than 25 percent of nothing.”

And Sokolski said he’s confident that lawmakers will see this as a change that will pay off for the state.

“The legislature has been very friendly to wind interests in the past,” he said. “And it’s supportive of low taxes. We expect the legislature and the governor to want to reduce taxes on wind going forward. We expect good solid support.”

If and when the tax law changes, Sokolski said he sees every reason for wind energy to take off again in South Dakota. Another critical factor – transmission capacity – is being addressed right now, he said, with the construction of three new transmission lines that will be able to accommodate “a significant amount of new wind energy” and move it to the Twin Cities and points east of there.

Even more important, Sokolski said, is the fact that South Dakota land parcels tend to be very large, with a good road network and “not a bunch of stuff in the way.

“You’re dealing with agricultural landowners who see wind energy as a way of diversifying, from an income perspective. You have wide-open spaces that are very, very windy.”

In short, he said, “It’s a fantastic place to develop wind farms.”

Wind on the Wires is a member of RE-AMP, which publishes Midwest Energy News.