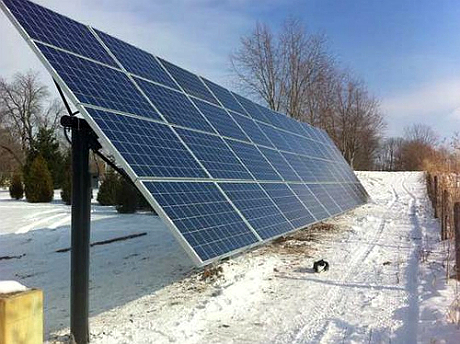 A solar array at a campground in Tippecanoe County, Indiana. (Photo via USDA)

The escalating battle between utilities seeking to guard against the rise of distributed generation and proponents of solar power played out in a heated committee hearing in Indiana’s House of Representatives on Wednesday.

The House Utilities, Energy and Telecommunications Committee passed HB 1320, with an amendment introduced during the hearing, in a 9-4 vote along party lines.

The arguments aired were largely the same as those made in controversial rate cases in Wisconsin and other places where utilities have sought to strictly control the economics of solar and other distributed generation – policies that renewable energy advocates argue could “kill” solar power.

Proponents of Indiana HB 1320, authored by Rep. Eric Allan Koch (R), adhered to the same talking points seen in other similar fights, framing the initiative as a way to protect ratepayers and particularly low-income people from solar installation owners who they say are freeloading and not paying their “fair share” to maintain the grid.

Renewable energy advocates see the Indiana bill as a way for utilities to insulate themselves from dropping demand and fundamental changes to the nature of electricity generation.

“If you step back and look at the big picture, what’s happening across the country is clearly a concerted movement among utilities to push back this emerging technology,” said Rep. Matt Pierce (D). “What we have here today is the first step in a reoccurring pattern – old industry with old technology…trying to protect their existing business model…They try to hobble the new technology’s roll-out, try to buy themselves some time.”

HB 1320 would make the installation of solar panels much less financially viable for homeowners, businesses and nonprofit organizations in Indiana. The bill includes provisions very similar to those proposed by utilities in the Wisconsin rate cases.

It would revoke the retail rate paid to people with solar panels for energy they send back to the grid, and institute lower payments. It would change net metering policies in ways much less favorable to owners of solar installations. It would impose new interconnection costs for distributed generation, and it would increased fixed costs paid by all customers regardless of use, reducing the incentive for people to decrease their energy use.

It also includes a “long list” of burdensome requirements for solar installers – as Pierce phrased it – mandating that they be familiar with a plethora of federal, state and local codes.

Koch, the energy committee chairman with investments in many oil and gas companies, said those requirements are necessary to make sure line workers, children and “lawn care folks” are not injured by improperly installed wiring.

The amendment removed tenets of the original bill that would have affected farms or other institutions with biogas digesters. The amendment also allowed co-generation facilities to be owned by one entity and operated by another, sparing them from limitations in the original bill, and removed a “decoupling” provision that many found objectionable.

At the hearing, proponents of the bill described a situation where people with solar panels are being “subsidized” by their neighbors because they don’t pay their “fair share” for upkeep of the grid. As in Wisconsin, bill proponents said low-income people are disproportionately cheated by this structure, since they are unlikely to be able to afford solar installations.

Pierce said he has never heard from a constituent concerned that customers with solar are not paying their fair share.

Olson said utilities should be required to show evidence that customers with distributed generation are not paying enough to maintain the grid.

A statement was submitted from the National Policy Alliance, a group representing African American public officials, indicating that African Americans are treated unfairly under current policies since they are less likely to have solar panels.

Later Denise Abdul-Rahman, chair of environmental and climate justice for the Indiana NAACP, testified against the bill, saying that elderly, low-income and African American people are disproportionately likely to be hit by the increased fixed charge, since they tend to have smaller homes and lower energy use.

Rep. Alan Morrison (R) berated her, saying “I know a lot of poor white people in small homes, I don’t understand how the interjection of race into this makes any sense at all. It seems so unnecessary.”

Abdul-Rahman countered that the National Policy Alliance had framed the debate in racial terms, and hers is the only local group representing African Americans.

A citizen named Charlie Goodman offered an in-depth critique of the bill and said he would like to install solar, but he would not be able to afford it “unless the banks allow me to go in and rob them and get away with it.” He said he is facing massive bills for serious health problems, and the increase in fixed rates would make solar power even further out of his reach.

“Do you think it’s more fair for your neighbors to pay that fixed cost than for you to pay it?” asked Morrison, after wishing him luck with his health. “You shouldn’t just chip in, you should pay the entire cost.”

Critics of the bill noted that solar and other distributed generation make up only a small fraction of Indiana’s power mix, and that such a bill should not be passed until more study is done and utilities or their backers provide numbers to prove their claims.

Ball State University economics professor Michael Hicks, testifying as “neutral” on the bill, said that distributed generation currently makes up less than 1 percent of Indiana’s power. He said this is largely because of the cost; his family considered installing solar but found the payback time would stretch into their teenage kids’ college years, and would also entail housing bulky batteries in their garage.

However, Hicks said, distributed generation in the state is growing exponentially and by the end of the decade could represent 3 to 12 percent of the state’s energy, with installations much cheaper and more manageable for regular residents.

“In short by the next time I need a roof, which will be in 20 years…there will be a competitively priced distributed generation facility for me to install,” he said.

He noted that net metering and other policies like those covered in the bill will have a big effect on how much distributed generation increases in coming years. He pointed to Hawaii as a place where friendly net metering laws meant “an explosion” in solar installations.

“The IEA believes HB 1320 strikes the correct balance,” he said. “To grow the amount of customer-owned generation in a way that is fair to all — those who have it today, those who want to put it in place tomorrow, and those that will probably never install distributed generation.”

Environmental groups, individual citizens, religious leaders and solar industry representatives testified about the positive impacts of solar energy and how the bill would chill the sector. Solar energy employs 1,400 people in Indiana, according to proponents.

“HB 1320 does destroy the solar industry in Indiana,” testified Brad Morton, president of Morton Solar, as people cheered from the overflow room where they watched the hearing on monitors. “It takes away any little bit of economic incentive and puts it right into the pockets of the utility company. All of this about paying for the grid is just ridiculous.”

Jesse Kharbanda, executive director of the Hoosier Environmental Council, denounced lawmakers for saying his group had input on the bill, when he said that was not in fact the case. He cited Indiana’s high unemployment rate and said the bill would mean national and foreign solar companies would be unlikely to invest in manufacturing in the state.

“Consider what signal you are sending to young Hoosier entrepreneurs” at a number of local universities, he said. “Indiana is going to drastically put barriers up to the fastest growing sector of the global energy economy. Is that really a signal that you want to send to Indiana’s best and brightest?”