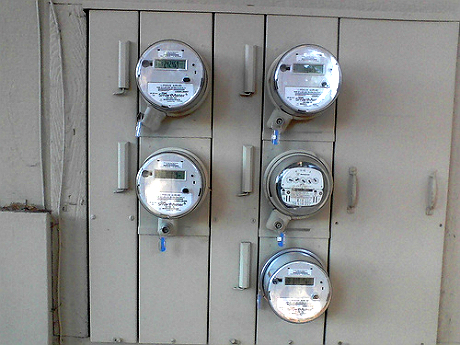 (Photo by daniel via Creative Commons)

Energy prices are at their highest at times of peak demand – hot summer afternoons or evenings as people get home from work. That’s when extra power plants are fired up to meet the spiking demand.

But for most ratepayers, there is no financial incentive to avoid using energy at these times.

In Illinois, the Citizens Utility Board (CUB) and the Environmental Defense Fund (EDF) are asking regulators to demand that utilities ComEd and Ameren Illinois institute “time of use” pricing to charge customers more accurately for the price of electricity at the time they use it.

That means energy used at night or other low-demand times would be much cheaper, and energy used at peak times more expensive. People would theoretically then shift nonessential electricity uses like running the dishwasher or charging batteries to low-demand times, saving money on their bills and curbing energy demand, potentially cutting the need for extra carbon-emitting generation.

In a filing with the Illinois Commerce Commission on Feb. 12, EDF and CUB asked the commission to order ComEd and Ameren to develop time-of-use plans and offer the option to their customers soon. The commission had previously ordered the utilities to study the possibility, but CUB and EDF indicated the utilities are not moving quickly or concretely enough to make time-of-use a reality.

“We hope to be able to work with the utilities on this, we think it’s in the interest of consumers and the state,” said CUB executive director David Kolata. “We haven’t reached any agreement with them yet, but we’re hoping we can.

“Utilities tend to move very slowly at times, but we hope this is something we can work out.”

CUB and EDF are members of RE-AMP, which publishes Midwest Energy News.

“We strongly support energy supply pricing programs that recognize that the cost of energy supplied to customers varies throughout the hours of a day,” said ComEd spokesman David O’Dowd. “Time of use rates are one example of such programs.  While past opt-in [time-of-use] programs have had limited success across the nation, including one offered by ComEd until 2006, we will evaluate the merits of the current CUB-EDF proposal and communicate our position in the ICC docketed proceeding.”

Smart meters that both ComEd and Ameren are distributing allow people to see their energy use broken down by time of day. With those meters in place, time-of-use pricing would take little extra effort on the utilities’ part, the proponents say.

One of the goals of the state Energy Infrastructure Modernization Act, or Smart Grid bill, was that “participating utilities should offer innovative technological offerings that will enhance customer experience and choice,” as the ICC filing says. While the law does not require time-of-use rates, EDF and CUB say it would be a good way to fulfill the spirit of the legislation.

“We need to have smarter pricing options available for consumers in order to take full advantage of the smart grid infrastructure,” said Kolata.

Ameren Illinois spokesperson Victoria Busch said she could not respond to specific questions regarding the ICC filing or the company’s time-of-use plans. But she said the utility is working on such programs as they roll out smart meters (or advanced meters) to customers.

“We are in year four of a 10-year plan to invest $3.5 billion to modernize our energy delivery infrastructure. As part of that plan, we have just begun to install an advanced metering system. By 2019, approximately two-thirds of our customers will have an advanced meter.

“Over time, advanced metering customers will be able to participate in a time-of-use pricing program such as Peak Time Rewards, which we plan to introduce in 2016. This program will provide cost-saving incentives to customers who reduce energy use during a peak time usage event.”

“We believe that [time of use] done right can have benefits for customers,” said O’Dowd. “ComEd is currently participating in workshops to discuss enabling the competitive market for electricity in relation to [time-of-use] rates, and we continue to work with the Illinois Smart Grid Advisory Council on these issues.”

How it could work

In their ICC filing, CUB and EDF propose a structure where the day is divided into three blocks for peak, off-peak and super off-peak demand. The blocks would be four, 12 and 8 hours, respectively.

Prices for each block could be set annually or every two years based on average demand and cost at those times of day. So ratepayers would know how much they would be charged for using electricity during a given block.

The concept is similar to, but more predictable than, a real-time pricing option that some Ameren and ComEd customers already use, wherein they are charged for the exact price of power at the time they use it. Busch described Ameren’s real-time program:

“The price customers pay varies hour by hour on actual market prices. It uses ‘day-ahead’ prices, meaning the price for each hour of the day is set the night before. The advantage is the customer can plan ahead and manage energy costs by shifting usage during lower priced times of the day or evening.”

“Even though market prices plunge to just a few pennies per kilowatt-hour or lower at certain hours of the day—most Illinois residents cannot take advantage of these low prices because they are locked into rigid, ‘flat’ rates that only change with the season (e.g., summer, non-summer),” wrote EDF senior economist James Fine in a recent blog post.

Alternative retail electricity suppliers could also offer their customers time-of-use pricing, and at least one Illinois supplier does, Kolata said. But since alternative suppliers have fewer customers and fewer resources to put toward customer education, enlisting the utilities is the priority.

The filing notes that previously utilities and the commerce commission had raised concerns about whether time-of-use programs would violate the Integrated Distribution Company (IDC) rule barring utilities from offering services that compete directly with alternative suppliers. Time-of-use pricing would not be a “service” in that sense, and utilities can also request a waiver from the rule, so that rule is not a reason to stall on offering it to customers, Kolata said.

The ICC filing proposes that a time-of-use rate be offered as an opt-in program for four years, meaning customers would volunteer to participate. Then starting in the fifth year it might be an opt-out program, where customers are automatically enrolled unless they decline to participate.

The filing asks that once a final order is made, the utilities be mandated to file a rate proposal including time-of-use pricing within 90 days. There is no deadline by when the commission must take action on the filing, but Kolata said he is hopeful of seeing progress on the issue within the year.

Time-of-use could be especially beneficial for customers in ComEd’s territory in northern Illinois, which is part of the PJM regional energy market.

That’s because rate hikes for customers are likely looming thanks to changes in the works in how power companies in the PJM are paid for promising to have the capacity to generate extra electricity. Ameren’s territory in downstate Illinois is in the MISO energy market, which doesn’t have the same changes on deck. Capacity costs can be contained if peak demand times are reduced.

“We have to give people the tools to reduce peak demand, or we’ll be in a world of hurt in Illinois,” Kolata said. “Giving people an incentive to move their electricity usage to when it’s cheapest for the overall system would produce big benefits overall. It could significantly reduce wholesale and capacity costs.”

Kolata said utilities would not lose money even if a consumer reduces their energy use, because in the deregulated energy market in Illinois the utilities are paid to deliver electricity, and separate power companies are the ones who sell the actual energy.

“We believe it would lead to significant opportunities for consumers to manage their energy costs, the cost of capacity and the energy itself, in that sense it’s a win for consumers,” Kolata said. “From a purely distribution point of view it is revenue-neutral. The savings will come on the energy side.”

Time-of-use pricing is still “pretty rare” nationwide, though there are a handful of pilot programs in place, Kolata said. Fine has reported on high interest in time-of-use pricing in California, where Sacramento ratepayers are all scheduled to be enrolled by 2018.

“We’ve seen overall savings of 10 to 15 percent, sometimes a bit more on real-time pricing in Illinois,” Kolata said. “We know over the next few years there will be a process of rethinking utility business models, ‘utility of the future’ discussions will break out soon. We view this as an important part of that conversation.”