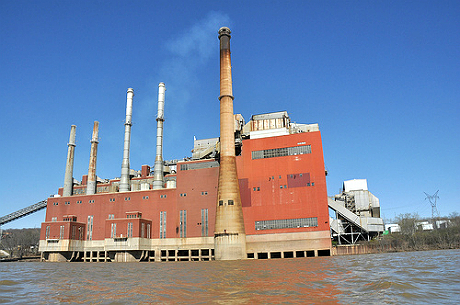 The Walter C. Beckjord power plant in Ohio is one of many that have shut down rather than meet pollution rules. (Photo by Brett Ciccotelli via Creative Commons)

A case currently before the Supreme Court could decide whether coal-fired power plants can escape federal rules for mercury and other hazardous air emissions. The case has important consequences for Ohio and other parts of the Midwest.

On the one hand, utilities and other challengers argue that the U.S. Environmental Protection Agency unreasonably failed to consider costs in determining whether the regulations are appropriate.

On the other hand, the U.S. Environmental Protection Agency says the new rules can save tens of billions of dollars in human health costs each year.

Advocates say those amounts and other costs shifted to society are essentially a subsidy for coal-powered electricity.

Briefs have already been filed on behalf of 22 states that sided with large utilities and coal mining interests to challenge the U.S. Environmental Protection Agency’s power plant rules on mercury and other hazardous air pollutants.

FirstEnergy cited the rules as a major reason for closing its Lake Shore, Eastlake, and Ashtabula plants in Ohio. The closing date for those plants was then delayed until this April.

American Electric Power (AEP) also has given the rules as a reason for closing several plants, although other business considerations apply as well. Both companies and other utilities have already spent millions so that remaining coal-fired power plants can comply with the rules.

Briefs from the EPA and from other states and groups that support the 2012 rules are due today. Replies are due one week before the March 25 oral argument.

A decision on the case’s merits may or may not come before the rules’ April 15 effective date. In any case, however, the outcome will still make a difference in Ohio and elsewhere.

A question of costs

The case before the Supreme Court is actually three cases joined together: one challenge by Michigan, Ohio and other states; a challenge by the National Mining Association; and a challenge by a group of utilities known as the Utility Air Regulatory Group.

Costs are at the heart of the challenges. Indeed, the Supreme Court has limited the case to just one question: “Whether the Environmental Protection Agency unreasonably refused to consider costs in determining whether it is appropriate to regulate hazardous air pollutants emitted by electric utilities.”

“The U.S. EPA’s position is that—whatever the relevant costs and benefits—cost-benefit analysis is simply inappropriate when determining whether it should regulate,” said Dan Tierney, a spokesperson for Ohio Attorney General Mike DeWine. “Ohio contends any common-sense regulatory regime would engage in that cost-benefit analysis.”

The U.S. EPA and other supporters say the new rules will produce clear benefits to health and the environment.

Walke heads the Climate & Clean Air Program for the Natural Resources Defense Council (NRDC), which is a party to the Supreme Court proceedings.

Mercury emitted from power plants can settle in lakes and streams. There it builds up, or bioaccumulates, in fish and other aquatic life, Walke explained. People who eat the fish can then be exposed to the mercury. Those at greatest risk are pregnant women and their fetuses and young children, he noted.

“We believe it is problematic for the U.S. EPA to refuse to consider the costs that its regulations will impose on ordinary Ohioans in the form of higher utility bills when determining whether those federal regulations are ‘appropriate’ within the meaning of the relevant provision of the Clean Air Act,” Tierney explained. “The U.S. EPA itself estimated the potential costs of the regulation at around $9.6 billion.”

“The specific benefits are about $4 to $6 million per year in reduced mercury emissions, which is what the rule is designed to regulate,” Tierney added. “The EPA has suggested that other ‘co-benefits’ make the numbers much greater,” he conceded, but said that was “beside the point” for purposes of the case.

U.S. EPA reported that estimated compliance costs for the final rules are about $1 billion less than they would have been for an earlier proposed version.

Moreover, the rules don’t just cover mercury, Walke added. They also deal with emissions of acidic gases, such as hydrogen chloride. The rules will also reduce problems from various heavy metals, including arsenic, lead and nickel.

As a result, U.S. EPA has said that the controls for meeting the new requirements will have far-reaching impacts. The agency projects that there will be fewer premature deaths, hospitalizations, and missed work and school days due to a variety of ailments in addition to neurological problems. Those other illnesses include things such as asthma attacks, heart attacks and chronic bronchitis.

Indeed, U.S. EPA’s own cost-benefit report shows that the controls needed to meet the new rules will produce between $37 and $90 billion in health benefits each year. Environmental benefits would be in addition to those savings.

In effect, those amounts are equivalent to externalized costs, Walke noted. That means they’re expenses that society already incurs.

“When polluting industries externalize their pollution to society at large, they are in effect receiving a form of health hazard subsidy from the public,” Walke said. “They are imposing harms and real economic costs upon the public.”

The Utility Air Regulatory Group’s lawyers at Hunton and Williams did not return a phone call and two emails seeking a complete list of the members whose interests they are representing in the case. The law firm did not provide the information to the Sunlight Foundation either, when that group inquired about comments objecting to U.S. EPA’s proposed Clean Power Plan.

Spokespeople for both AEP and FirstEnergy confirmed that they or their affiliates are members of the Utility Air Regulatory Group. Both companies indicated that they have already made millions of dollars in capital improvements for their coal plants that will continue to operate after the effective date of the new rules.

“We expect to invest approximately $370 million as part of this effort,” said Stephanie Walton at FirstEnergy. As those compliance projects continue, the company’s management “will follow the Supreme Court’s proceedings on this issue and consider our options once they’ve made a final decision.”

It’s not clear whether that evaluation by FirstEnergy would affect any plants already scheduled to close.

Meanwhile, she said, AEP has also been making investments so its remaining plants can meet the new rules, as well as other requirements under the Clean Air Act. “We are fully committed to those investments, and by the time a decision from the Supreme Court is expected, we will have completed or be well on our way toward completion with most of them.”

However, a Supreme Court decision throwing out the rules “could impact certain aspects of the operation of those controls after installation,” McHenry added.

Operation of such controls is a big concern for environmental advocates. “It would be absolutely devastating if the Court were to overturn these standards in response to the industry lawsuit,” Walke said.

The technology to meet the standards has already been around for years—and in some cases for decades, Walke observed. “We know how to control the pollution. And a great deal of power plants in the United States—including many in Ohio—already have the equipment to comply with these standards,” he said.

But having the technology and actually using it don’t always go hand in hand. “In the absence of legal requirements, many plants were not running already-installed pollution control equipment every day,” Walke noted.

Both sides of the case also believe it could set an important precedent.

“It is important to remember that the question being considered by the Supreme Court—whether EPA should have considered the costs of the regulation…—has implications not only for the MATS [mercury and air toxics] rule, but for other rulemakings,” McHenry stressed. Those implications “are of long term importance,” she said.

In other words, a win for the utilities in this case might make it easier for them to challenge future regulations by letting courts delve more deeply into debates over costs and benefits.

Walke and other supporters of the rules believe U.S. EPA made an appropriate decision to regulate mercury and other hazardous air pollutants. Moreover, Walke added, federal courts in the judicial branch have traditionally deferred to agency experts in the executive branch when reviewing agency rulemaking.

“An adverse decision [against U.S. EPA] would represent an abrupt shift in the high Court’s view of the separation of powers,” Walke stressed. Any such result could affect not just environmental cases, but cases involving other administrative agencies as well, he noted.

Meanwhile, Walke and others remain concerned about hazardous air pollutants and other power plant emissions.

“It’s the moral responsibility of these companies to clean up their pollution,” Walke said. “But it’s also a legal and economic responsibility since this pollution is a cost of generating electricity from dirty coal plants in America.”

“If we were honest as a society about the cost of dirty energy versus clean energy,” then clean and renewable energy “would easily come out ahead,” Walke added.

The Natural Resources Defense Council is a member of RE-AMP, which publishes Midwest Energy News.