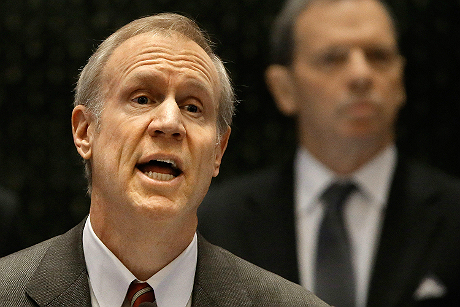 But in trying to address the state’s current budget crisis, Rauner is proposing to cut existing energy efficiency and renewable energy programs, and to sweep money already collected for those programs into the state’s general coffers.

The administration’s draft budget released in February calls for shifting $175 million worth of energy programs from the Illinois Department of Commerce and Economic Opportunity into the state’s general revenue fund. (See chapter 4-12 of the draft budget).

That money is collected from ratepayers on their utility bills, and by law it is supposed to be used exclusively for specific energy projects, namely the Energy Efficiency Portfolio Standard (EEPS) fund and the Renewable Energy Resources Trust Fund.

The efficiency fund is used for energy efficiency projects on government buildings and for low-income residents, including in public housing. The renewable energy trust fund provides rebates to residents for wind and solar installations.

The pot also includes money collected for supplemental low-income energy assistance and coal technology development assistance. The draft budget indicates that after money already in these funds is swept, those programs will be eliminated – with a zero budget – in FY2016.

Rauner’s office did not respond to requests for comment. The draft budget says:

“Beginning in fiscal year 2016, an estimate of $175 million in tax receipts for various utility taxes and charges will be deposited in the General Revenue Fund. These existing revenue sources have been deposited into other state funds in prior fiscal years for the Department of Commerce and Economic Opportunity (DCEO) to administer various coal and energy programs. The funding for these specific DCEO programs is recommended to be discontinued in the fiscal year 2016 budget.”

Experts say it isn’t fair or even legal to sweep money collected from ratepayers specifically for energy efficiency and treat it is a tax for general state spending. And they say it violates the spirit of promoting energy efficiency and renewable energy, and could mean that important projects are not done, depriving the government and low-income people of energy savings.

“The governor is doing something that is improper and illegal…it’s just inexcusable,” said Robert Kelter, energy efficiency program manager for the Environmental Law & Policy Center. “This is money collected from utility ratepayers, not tax money. The law is very clear that these funds are supposed to go to these energy efficiency programs. These costs are collected through people’s utility bills then the money is turned over to the DCEO to pay for these programs.”

“Stealing money from programs that save energy for affordable housing and public buildings is an absurd way to try to balance a budget,” added Rebecca Stanfield, a Chicago-based policy director for the Natural Resources Defense Council. “It guarantees inefficiency, which is a drag on our economy, makes the utility system more expensive for other ratepayers, and disadvantages families who are living in leaky buildings spending a huge part of their income on utility services.”

“Both energy efficiency and renewable energy programs are self-funded through a rate utility tax,” she said. “I cannot understand how the legislature can appropriate a tax for a particular purpose, only to spend it on something entirely different.”

(Albrecht  later clarified that the charge on ratepayers’ bills is actually a surcharge,  not a tax.)

It is generally understood that funds from specific programs which are “swept” to cover a budget gap are meant to be replaced at a later date. But with the state in such crisis, experts aren’t confident that the energy efficiency and renewable energy funds will be restored any time soon.

Some still hope legislators will push the issue with the governor during the lengthy talks that go into crafting and passing the final budget.

“We need to give him the benefit of the doubt right now that there wasn’t a full understanding of what this entailed,” said Kelter.

The sweeping and zeroing out of the Renewable Energy Resources Trust Fund means that state rebates for people who installed rooftop solar are in limbo. A January 12 executive order to freeze all discretionary state spending, which Rauner issued immediately after taking office, is also complicating solar rebate programs.

Environmental attorney James Brusslan decided to install solar panels on his home in the Logan Square neighborhood of Chicago as part of the Solar Chicago program, promoted by Rauner’s friend, Mayor Rahm Emanuel. That program helps Chicagoans access cheaper solar panels through bulk purchases from designated suppliers, and also guides them in applying for the state rebates.

In October, Brusslan and his wife were notified that they qualified for a rebate of $4,465 from the state Department of Commerce and Economic Opportunity for their planned solar installation, with a total cost pegged at $17,863. Around that time Brusslan made a payment of about $5,000 to Microgrid Solar, one of the companies carrying out the Solar Chicago program.

The Illinois Department of Commerce and Economic Opportunity, which carries out the program gave him 120 days to install the solar system and collect the rebate. When it became clear Microgrid could not complete the work in that window, Brusslan said, he requested and obtained an extension from the state agency.

But on February 23, he got an email from Microgrid saying, “It is Microgrid’s understanding that the Illinois Department of Commerce and Economic Opportunity has interpreted the Executive Order as barring any payments of the 2014 solar rebates until the spending freeze is lifted.”

Brusslan is now skeptical he’ll ever get the rebate.

“It’s a nice thing to have solar panels, but since we don’t use much electricity the savings are not that great,” he said. “It was the incentive that made it worth it. If you take that away, we’re really making a big sacrifice. Now the payback time could be something like 15 years. It’s frustrating.”

“That money has to be paid,” said Kelter. “People made big investments and they are counting on those incentives.”

Albrecht is also a renewable energy specialist for the company Solar Service Inc. She said she has been in touch with the DCEO and is confident that the rebates will ultimately be given. The executive order applies to all different types of discretionary funding and contracts, she noted, and was meant as an emergency measure while the new administration tries to get the state’s finances in shape. She herself is due a rebate, and fully expects to get it.

But she said the situation is unfortunate for solar development, since it shakes residents’ confidence in the rebate program and could make them back out on, or delay committing, to solar.

The rebate freeze is especially problematic because of scheduling issues. The state’s fiscal year starts on July 1, so solar panels need to be installed by May in order to get a rebate awarded in the current fiscal year. That means solar installers are working against the clock through the winter and spring, not an ideal situation.

The crunch could be worsened by any delays caused when customers hesitate to go through with their installation because of fear they won’t get the rebate, then decide to do the installation as the deadline approaches.

“Every day is vital to our schedule – even last week when it was subzero, our guys were on rooftops,” said Albrecht. “Any delay will have domino effects on our business.”

Even if promised rebates are paid, the FY 2016 draft budget indicates that the renewable energy rebate program will be discontinued going forward. Advocates say that would be a big loss.

“The rebate program has done a tremendous job to develop projects within the state,” said Albrecht. “It’s the primary driver for the little solar we do have today. Eliminating this program jeopardizes the future [of Illinois solar] while we put the new RPS in place.”

She is referring to the state’s Renewable Portfolio Standard (RPS), a law that requires the state get a certain percent of its power from renewable sources. The law has not encouraged new renewable development in recent years, because the way it’s structured gives power producers no guarantee of long-term purchase commitments.

The state bill introduced in February would change the RPS so that the renewable requirements are greater and structured in a way meant to spark new development, including distributed rooftop solar.

Albrecht said the current fears about the solar rebate program underscore why a strong RPS is needed. If the RPS bill passes the legislature and is signed by Rauner, solar development should accelerate even without rebates.

“The new legislation will simplify everything,” Albrecht said. “I can’t wait. We have to pass this bill.”