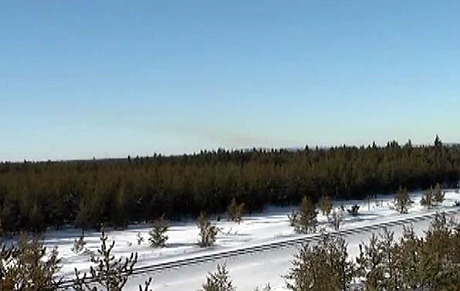 Property in Sands Township, Michigan is being considered for a proposed oil refinery. (Image via YouTune / Fox U.P.)

Since that time, “not a peep” has been said about the project, according to Marquette County Commissioner Karen Alholm, whose district could hold the development.

But while not much has been said about the project — the developers with Bison Oil LLC are in the midst of a months-long due-diligence phase — one expert on the topic suggests that the project could be tied to the larger energy needs of the U.P.’s mining industry. Growth in that sector could indeed make the project an issue.

Will Stone, Bison Oil’s chief operating officer, did not respond to multiple interview requests. In a local media report shortly after the project was presented, though, Stone suggested the proposal could meet fuel needs for some of the region.

“What we were looking at was a 20,000 barrel production facility and creating a distribution hub in or around Sawyer [Air Force base] and then also supplying the local area and the upper U.P. with cheaper fuel,” he told a local television station.

Under “current projects” on Bison’s website, there are three projects listed for Gwinn, Michigan, south of Marquette: a 40,000-barrel-a-day oil refinery planned to be completed in 2017; a 6,000-barrel-a-day oil refinery to be completed this year; and a 250 MW “power plant” to completed in 2017, which would likely be powered by natural gas. The refineries were reportedly scaled back to 20,000 barrels and 1,500 barrels a day.

‘They kind of went underground on us’

Despite the lack of activity on the project, some residents still fear it will be brought back before elected officials, pitched as jobs and development in an economically distressed area.

“This is sort of how these developments chug along in the U.P.,” said Alexandra Maxwell, interim director for Save the Wild U.P., an organization that has closely watched the sulfide mining industry there. “This is going along a pattern of this exploitation of economically depressed areas that are desperate for jobs and along come these industries with their big promises of jobs and economic growth. People get really excited, then the process takes five to six years and all of a sudden it happens, or it gets lost in regulation.

“From my perspective, I’d love for this to get lost in the regulatory maze. It seems like business as usual, honestly. With the lack of transparency surrounding it and promises made of economic growth, it sounds like things we’ve heard before.”

A state Department of Environmental Quality supervisor based in the U.P. said the state had a “very preliminary discussion” about the project when it first surfaced, but that no formal permitting has begun.

Additionally, Maxwell said there has been little discussion about how the facility would get its water supply or where the wastewater would go. According to minutes from a local township meeting in December, the project would draw water from the city of Marquette instead of drilling into the local aquifer.

After the project was proposed, the Sands Township Board — where the project was originally proposed — voted 4-1 on a non-binding resolution against doing business with Bison Oil.

“The township doesn’t want this thing,” said Rick Wilson, deputy supervisor of Sands Township. Wilson had heard shortly after the initial announcement that the project would be downscaled and located outside of the township, “But they were very nonspecific. I don’t know what the plan is now. They kind of went underground on us there.”

A community advisory panel was reportedly supposed to be formed in January for residents to voice their concerns or support, but Wilson and Alholm said no meetings have been held yet.

The role of the mines

“Mines require large amounts of both electric power and diesel fuel,” Blackburn explained in an email. “The U.P. is fairly far from any large refinery … so if mines are developed to the point that their increased demand justifies the cost of a new refinery, then a new refinery might be viable.”

But the emphasis is on “might.” Based on a variety of market factors, it may still make sense by the end of Bison’s due-diligence period for the U.P. to transport fuel from refineries in Wisconsin, Minnesota, Ontario and Detroit. Or, Blackburn said, it may make more economic sense for the mines if the Calumet refinery in Wisconsin were expanded rather than a new one being built in the U.P.

“Ultimately, the commercial fate of this refinery might be linked to the developer’s ability to enter into long-term supply contracts with mining companies and whatever tax and development incentive packages it can squeeze from the local governments it appears to (be) playing off against each other,” Blackburn said.

But if Bison Oil’s proposal is at all dependent on the mining industry, Wilson said that is not how the developers pitched the project.

“They were very specific when talking about mining,” Wilson said. “The power plant they wanted to put up was not going to be based on mining operations because, no matter what they do with the mine, a mine is short term.”

Who is Bison Oil?

According to minutes from the Sand Township Board’s Dec. 1, 2014 meeting, Wilson had previously met with representatives from Bison Oil and House Pacific “regarding a possible power plant and oil refinery” on land owned by Marquette County within the township.

Vikki Kulju, who reportedly has been working with the company about finding a location for the development, spoke briefly to confirm initial media reports about the project, but declined to comment further.

According to Bison Oil’s website, its top officials come from a variety of nonprofit, corporate financing and development backgrounds, as well as renewable energy development. Stone reports to have “34 years of diverse renewable energy project development and construction experience,” including serving as CEO at American Wind and Energy Group for the past 10 years.

The project eventually fell through because American Energy Holdings was beat by another company, said Rachel Lindstrom, executive director of the local economic development agency in Devils Lake.

“It was a business decision,” she said. “They just weren’t as far along [in development] as they wanted us to believe they were. When it came time for action, struggling with financing was a big piece of it — staffing as well.”

A refinery is now moving forward in Devils Lake by Eagles Ledge Energy, which wants to produce 20,000 barrels a day and promises 100 jobs directly related to the project.

Another possible location for the project is the former K.I. Sawyer Air Force Base in Gwinn, 25 miles south of Marquette.

The location, with many low-income residents, is a “sort of relic of what once was” in the U.P., Maxwell said — a former epicenter of the community that deteriorated after the federal government closed the base.

There have been ongoing efforts and interest from the county to redevelop the area, Maxwell added. Developers from metro Detroit said in November they have plans to build a 34 MW biomass plant there, largely as a solution to electric reliability questions shrouding the coal-fired Presque Isle Power Plant in Marquette.

The site may be conducive for development because of the built-in infrastructure already there, Maxwell said.

The infrastructure and need for economic activity are already competing with environmental interests in the area.

U.S. Rep. Dan Benishek, who represents the U.P., said in a December statement about the Bison Oil proposal: “We need to find out about the impact it would have on the area, as well as get insight and support from the local community. Working to create more jobs in northern Michigan has been my top priority since coming to Washington and I am open to learning more about efforts to improve the economy up here.”

Republican State Sen. Tom Casperson, who also represents the area, said by phone: “If it could work, it sounded like a good idea.”

Lisa Wozniak, executive director of the Michigan League of Conservation Voters, said job prospects are based on a “very fake assumption. That’s a place that is important because of its natural features. Just thinking about where Michigan is at right now with renewable energy and the cost of renewables going down, this proposal flies in the face of moving the U.P. forward. It’s kicking the can down the road.”

Maxwell, of Save the Wild U.P., agrees that what makes this area of the U.P. unique is at risk with this type of development.

“When these companies come in and have big promises of jobs and economic growth, people get really excited,” Maxwell said. “But oil is a finite resource. Our organization is usually very hesitant about promises made by industry.

“We see them as short-term, especially made at the loss of our wild spaces, which is a huge boon for ecotourism. There are beautiful places for people to recreate, fish and camp — when those areas are ruined by industry, our tourism industry falls apart as well.”

The Michigan League of Conservation Voters is a member of RE-AMP, which publishes Midwest Energy News.