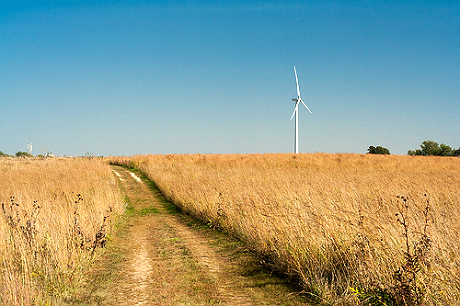 A wind turbine near Northfield, Minnesota. (Photo by Robert Hest via Creative Commons)

In January, one of Minnesota’s largest utilities began receiving power from the final phase of a new wind farm — in North Dakota.

Rated at nearly 500 megawatts, Minnesota Power’s Bison wind farm is the largest in its neighboring state.

Meanwhile, Minnesota has dropped three places since 2011 in the America Wind Energy Association rankings as Oklahoma, Oregon and Washington have surged up the rankings and as the state has focused on solar energy production.

Which begs the question — has the solar boom taken the luster out of wind in Minnesota?

The current state of wind in Minnesota

If Minnesota is seeing a wind slowdown, it’s in large part to its early success.

“There has been a bit of a lag, but I would frame it as our utilities are ahead of the curve in meeting their 2025 standards,” said Beth Soholt, executive director of Wind on the Wires.

The lag Soholt notes is about to end this year or early next year when 400 MW go online to serve Xcel Energy. That total is just a touch less power than all the community solar garden proposals that have been submitted to Xcel.

Xcel received regulatory approval to buy 750 MW of wind in 2013, with two of the four projects located in Minnesota, the others in North Dakota.

The Pleasant Valley project near Austin will add 200 MW and is being developed by RES America Development, Inc., which upon completion will transfer ownership to Xcel. The Odell Wind Farm near Windom — sold by Geronimo Energy in 2014 to Algonquin Power of Toronto — will produce 200 MW.

“Xcel Energy is the number one wind power provider in the country for the tenth consecutive year. Wind energy brings great value to our customers as a cost-effective and clean resource,” said Laura McCarten, Xcel’s regional vice president. “Our diverse mix of energy sources, including wind, helps us maintain reasonable costs for our customers, improve our environmental performance and provide safe, reliable service.”

The utility found that the cost of the projects over their lifetime is comparable to natural gas, she added. Wind was seen “as being in the best interest of our customers” while providing Xcel “a valuable hedge to any increases and volatility in fuel prices well into the future,” said McCarten.

There are other favorable signs for wind, with several proposals are in various stages of development. Soholt points to Xcel’s “integrated resource plan” that calls for 3,500 MW of renewables, with 1,200 MW by 2030 coming from wind.

Xcel sees wind “as an important resource” moving forward to its goal of reducing carbon emissions by 40 percent by 2030, said McCarten. In fact, the resource plan, when completed, will result in wind alone generating 25 percent of the utility’s energy mix, she said.

The reduction of carbon emissions by Xcel and other utilities, via wind, will also have an important role in helping Minnesota meet the requirements of the Environmental Protection Agency’s Clean Power Plan, Soholt added.

Despite the high interest and attention the solar movement has achieved lately in Minnesota, the state’s total output from the sun does not even equal a mid-sized wind farm.

The U.S. Energy Information Administration reported that in 2013 Minnesota received 15 percent of its net electricity generation from wind.

The industry continues to push Congress to extend the federal production tax credit that can significantly impact the financial viability of a project. At the end of last year the PTC had been extended only for projects that started in 2014.

AWEA reported that investments dropped from $25 billion in 2012 to $2 billion in 2013 and thousands of jobs were lost during another fight over the extension.

To Xcel, the loss of the tax credit would mean no more investment in wind until 2020, McCarten said. Non-PTC projects would look “more economic” by 2020 because of project cost reductions and potential gas price hikes, she said.

At the state level, Soholt and other renewable energy advocates, labor groups and environmental activists (including members of RE-AMP, which publishes Midwest Energy News) are asking for is the Legislature to increase the renewable energy standard to 40 percent by 2030.

“We’re talking at the capitol about increasing the renewable energy standard in Minnesota and laying the groundwork for support — and we’re finding it in outstate Minnesota,” she said. “Republicans are skeptical about wind farms but they understand [their] benefit and have received positive feedback from communities.”

If the Legislature approved the 40 percent by 2030 goal it would help Minnesota meet the EPA’s Clean Power Plan targets, Soholt said.

“Minnesota has a doable carbon reduction target and only a few ways to reduce carbon,” she said. “Wind is one of them.”

Helping out the argument of advocates at the Legislature, Soholt said, was a study by Fresh Energy (the RE-AMP organization where Midwest Energy News is based) which revealed that the state’s Wind Energy Production Tax has netted $48 million in revenues for counties, townships and schools over the last decade. The organization’s research predicts the amount collected could be $10 million this year.

The tax has brought in “enormous sums” for rural Minnesota government entities, especially in the southwest part of the state, Soholt said.

“It’s a fantastic story to tell about the amount of revenue going into these communities,” Soholt said “Some Republicans may grumble about mandates and about federal government policies but they understand the benefits wind farms have had in their district.”

Janice Fransen, Jackson County coordinator, testified before a House committee in January that the tax has brought in $5.2 million from 2010 to 2014 and will add another $1.8 million this year.

The county uses the first $350,000 annually for tax relief while the rest of the money goes to paying off bonds, repairing roads and building public infrastructure. Without that revenue the county would have to raise its levy 14.5 percent, Fransen told legislators.

In an interview later, Fransen said the county built, with the city of Jackson, a new $14 million public works facility without having to make a levy request. The tax relief portion of the proceeds, she said, jumps to $400,000 this year, a significant amount in a rural county.

The revenue “has benefited our citizens by lowering taxes along with improving our infrastructure,” she said. “We would have to raise the levy without the tax revenue.”

The state of small wind — roughly defined as projects of 20 MW or less using turbines of 100 kilowatts or fewer — hasn’t had much activity, said Lisa Daniels, executive director of Windustry.

Moreover, the small wind segment got off to a rough start this year when two Minwind Energy projects in southwest Minnesota declared bankruptcy. The two wind farms had 11 turbines owned by around 360 farmers and landowners, according to a January Minneapolis Star Tribune article.

Part of the problem stems from a $1.9 million fine from Federal Energy Regulatory Commission due to missing paperwork. The wind farms continue to operate and sell power to two utility customers, one of them Xcel, the article said. A potential buyer has stepped forward.

Data from the state show Minnesota has 30 small wind farms with fewer than 20 turbines each. Many were built when the state was subsidizing community-owned projects, Daniels said.

Windustry would like to see those programs renewed by the state to encourage small wind development.

Even more compelling would be a legislation allowing for community wind gardens, like community solar. Homeowners and businesses could buy shares in wind farms just as they do in solar gardens, she said, while receiving credit on their utility bills based on how much power their share of the wind investment generated.

“The program would open up more potential for urban customers to partner with rural areas,” Daniels said.