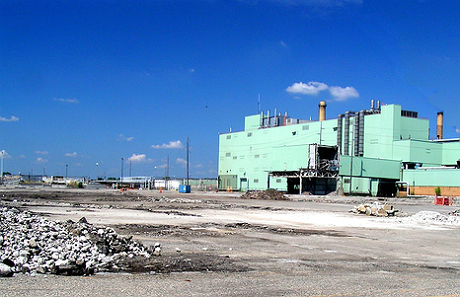 This former GM plant site in Lansing, shown here in 2006, is among the locations being considered for a 20 MW solar array by the city's utility. (Photo by Keith Kris via Creative Commons)

Developers and Michigan’s largest municipally owned utility could nearly double the state’s solar energy portfolio by partnering in what would decidedly be the largest single solar project here.

An official with the Lansing Board of Water and Light confirmed with Midwest Energy News Wednesday that the utility has selected a developer for a 20 MW solar project.

The original request for proposals, which was sent out last summer and attracted more than a dozen responses, was for a 5 MW project. The state’s largest solar projects operating or under development are less than 1.5 MW, while roughly 23 MW of commercial-scale solar statewide is tracked by the Michigan Public Service Commission.

Solar currently makes up roughly 1 percent of Michigan’s 2,300 MW renewable energy portfolio, according to the PSC.

One of the sites in the running is a vacant industrial property formerly owned by General Motors less than two miles from the state Capitol building.

A power purchase agreement is yet to be finalized and the original proposed location — GM’s former Verlinden plant that was demolished nearly 10 years ago — still needs to be secured, but the BWL is intent on increasing the scale of its original proposal.

“We got a whole lot of bids, there was a lot of interest,” said George Stojic, the BWL’s executive director of planning and development. “It just made sense to scale this thing up.”

The utility selected Vermont-based groSolar to develop a 20 MW project. Stojic said it’s up to the developer to ultimately secure a location.

Steve Remen, groSolar’s executive vice president of business development, said the former GM site is one of several the company is considering in the Lansing area and the project could need more than one property.

Stojic said the cost of solar would be roughly $60 per MWh at the former GM site, but that could vary depending on the location.

The property is owned by RACER Trust, which was created to manage, clean up and market former GM properties after the company’s bankruptcy in 2009. RACER oversees more than 250 acres of vacant industrial land in the Lansing area. The proposed site is on 57 acres west of downtown Lansing where Pontiacs, Oldsmobiles and Chevrolets used to be assembled.

Stojic said it made sense economically to scale up the project based on data taken from the BWL’s smaller, 150 kW solar array. Also, the BWL has limited, point-to-point transmission, he said.

“We are a summer-peaking utility. Solar fits well into that very well for two reasons: It’s there in the summertime if we need it and it helps offset transmission costs,” he said.

Stojic said he hopes details will be finalized and made public within the next couple of months.