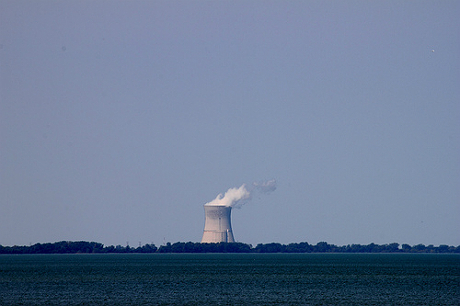 A proposal from FirstEnergy would guarantee income for the Davis-Besse nuclear plant and other facilities. (Photo by AlienCG via Creative Commons)

As FirstEnergy awaits a decision on its proposed electric security plan after a similar proposal from American Electric Power (AEP) was rejected by regulators last month, broader themes about Ohio’s energy future are emerging in the debate.

The plan recommended by FirstEnergy would have Ohio electricity consumers pay for operating costs of what critics deem two inefficient power plants; the Davis-Besse nuclear plant near Toledo and the W.H. Sammis coal-fired plant FirstEnergy operates on the Ohio River. An evidentiary hearing on  the FirstEnergy proposal is scheduled to be held at the Public Utilities Commission of Ohio (PUCO) offices on April 13.

The PUCO ruled last month that AEP’s similar proposal failed to promote rate stability or overwhelmingly prove that it was in the public interest. Opponents of FirstEnergy’s plan, who have characterized the proposals as “bailouts,” believe it should meet a similar fate.

A report published in January by the Cleveland-based nonprofit policy research organization Policy Matters Ohio declared the plan, which the utility characterizes as a Power Purchase Agreement (PPA), as a mere stop-gap substitute for the comprehensive energy structuring the state needs. (In another upcoming case, Duke Energy has asked to guarantee sales for its entire share of electricity from two Ohio Valley plants.)

“I applaud the commission for rejecting the AEP case, and hope for a similar decision in the case of FirstEnergy,” said Michael Shields, a Policy Matters researcher and author of the report.

Not only should the utility be responsible for its power plant expenditures, Shields says, the proposal further stalls clean energy standards frozen by state lawmakers last year.

“If the PUCO allows the plan, it will remove market incentives for FirstEnergy to retool to improve efficiencies, and will force Ohio families and businesses [to pay] for the waste,” Shields wrote.

The kicker for environmentalists, business groups, consumer advocates and other opponents of the proposal is that responsible resource use and innovative generating sources were already called for under SB 221, the electric industry restructuring legislation Ohio enacted in 2008. The bill contained energy efficiency requirements for investor-owned utilities and established the Ohio Alternative Energy Portfolio Standard (AEPS).

In May 2014, FirstEnergy-backed SB 310 essentially halted and scaled back the state’s renewable energy and efficiency standards for a period of two years. Critics of the income-guarantee plans are asking for an incremental full phase-in of the old standards in order to ensure a stable electric supply as well as the harnessing of new and sustainable power supplies.

As the proposition currently stands, FirstEnergy “is protecting outmoded generating sources while the market aligns with where we’re going with renewables,” Shields said.

In January, the PUCO heard testimony in the last of three public hearings to allow FirstEnergy’s Sammis and Davis-Besse plants to have consumers subsidize costs on facility operations for at least three years.

While the company has made pollution-control upgrades to the Sammis plant and billions of dollars worth of repairs to Davis-Besse, critics say it needs the subsidy to compete against wind turbines and natural gas-fueled power plants.

FirstEnergy spokesperson Doug Colafella said recent weather events like last year’s polar vortex have exposed vulnerabilities in Ohio’s electrical grid, in some cases resulting in a retail spike in prices. Factoring these events with “a significant number” of power plants being prematurely retired, and “these issues are putting Ohio’s energy future at risk by challenging the reliability and affordability of electricity in our region,” said Colafella.

“Baseload” generation in the form of coal and nuclear power can be part of Ohio’s energy plan moving forward, an outlook that includes natural gas and renewable sources, Colafella said. Though energy efficiency is not covered under FirstEnergy’s proposal, the plan does include up to $23 million in economic development and power saving assistance for Ohio communities.

But consumer-orientated critics like Policy Matters believe that if the old power plants cannot compete, they should not be subsidized by the public. FirstEnergy has closed eight coal plants since its merger with Allegheny Energy in 2011, stated the report. The company also moved its West Virginia-based Harrison coal plant to the regulated segment of the industry, where it enjoys a ratepayer subsidy similar to the one FirstEnergy is requesting now for its two incumbent power facilities.

There is no logic in having the public subsidize plants unable to meet cumulative electricity savings of 22 percent by 2025, a key facet of SB 221, maintained Shields.

“The electricity market, like the clean energy standards, shows that coal generation doesn’t make long-term sense,” said Shields. “The PUCO deal could enable FirstEnergy to ignore the market for now, but would introduce unnecessary challenges to meeting renewable and efficiency standards by displacing more efficient sources.

“FirstEnergy should make investments for their plants to be more cost effective, or opt into other, renewable generating sources.”

The Cleveland-based Institute for Energy Economics and Financial Analysis (IEEFA) released a study similar to Policy Matters’ last fall, stating that FirstEnergy’s financial health will flag if it continues to center its business around coal instead of adapting to competition and new technologies.

The changing winds of the utility industry mean inefficient generators should fall away, said IEEFA report co-author Cathy Kunkel. However, what should be a natural occurrence has been stifled by a company that would rather “re-regulate” than lose profit on its older power plants. Under a law passed 15 years ago, Ohio’s electricity generation providers are no longer regulated and must vie with each other for ratepayers.

“Customers are being asked to pay for plants that can’t compete in the market,” said Kunkel.

FirstEnergy consumers will also be spending more for their energy should the ESP come to pass, according to the Policy Matters study. The utility’s plan would cost ratepayers $3.1 billion over the full life-span of the 15-year power purchase deal. The number, gleaned by the Ohio Consumers’ Counsel and the Northeast Ohio Public Energy Council (NOPEC), takes into account the embedded future operating costs at the two aging power plants, no matter what the price of natural gas.

Colafella, pointing to a study by technology solutions firm ICF International, said customers will actually save $2 billion over the life of the plan, which will ultimately safeguard ratepayers against increases that could result from rising energy prices in future years.

Ohio electric customers may want to save money on their bills, but not with just any power source offered to them, said Shields.

A poll conducted by The Sierra Club found 92 percent of respondents saying investments in renewables were somewhat or very important, while 68 percent indicated increased likelihood of supporting an electric company power purchase agreement that would fund renewable investments.

Clean-energy backers want a returned focus to such green power options as wind, solar and biofuels, while allowing coal to die a natural death.

“Renewables have to be our energy future,” said Shields. “They’re the only option that’s sustainable and makes sense over the long-term.”

The Sierra Club and Policy Matters Ohio are members of RE-AMP, which publishes Midwest Energy News.