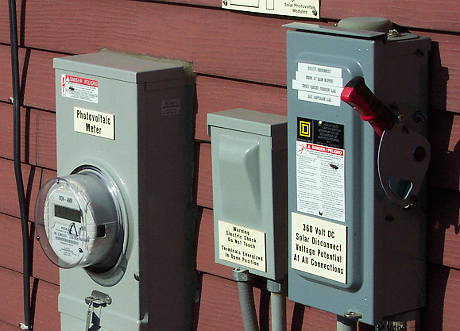 An Iowa bill requiring a safety feature that some engineers say is unnecessary has critics questioning whether the legislation is an attempt to stifle distributed generation.

The legislation, SF 406, would require customer-generators to install an external disconnection device. The device itself would add a few hundred dollars or more to the cost of a solar array or other system, but the bill also would impose daily fines of between $1,000 and $5,000 for any energy generator without one.

The requirement would apply to existing systems as well as new ones, according to state Sen. Tony Bisignano, who introduced the legislation.

Clean-energy advocates in the state have been focused on defeating the bill, which they see as an effort to discourage rooftop solar installations, in particular, by piling on an additional – and needless – cost.

“This is something that’s coming from the utility behemoths through the IBEW (International Brotherhood of Electrical Workers),” said Barry Shear, the president and owner of Eagle Point Solar in Dubuque. “They’re the ones pushing this.”

“It’s a well-designed play to talk safety, but it’s really designed to be a barrier to solar,” said Josh Mandelbaum, a staff attorney in Des Moines with the Environmental Law & Policy Center.

Mandelbaum questions why the union didn’t raise concerns about the issue when it submitted comments to the Iowa Utilities Board on distributed generation last year.

“This is exactly the type of issue that would have been appropriate to raise at that time,” Mandelbaum said, “and they were silent. That, to me, suggests that something else is at play.”

Bisignano said he introduced the bill to ensure the safety of utility workers making repairs in the event of a power outage. He said repair workers must be assured in such a scenario that no power is coming into the grid from distributed generators, and the only way to be certain of that is for the linemen to manually disconnect any solar panels in the affected area.

“It’s just….an effort to create barriers to deploying PV,” he said. “When I see these rules enacted, it’s clear the devices won’t be used, and will add cost.”

Bisignano maintains that he “would not want to discourage any alternative renewable energy. That would not be my intention by any means. This bill would ensure that there is no opportunity for energy personnel or electrical workers to be electrocuted. That’s the long and short of why I filed the bill.”

So why would they support a bill mandating a device they’ve already chosen to require?

Utility linemen and other possibly other electricians looking for these switches need to know where they are, he said. Hence, the need for consistency in their location. The bill does state in some detail where the switches should be placed.

“Our hope with this bill is that we could create some uniformity on the grid,” Foss said. “While there are many different utilities, there is one grid.

But wherever the switch is installed, it’s still redundant and unnecessary, according to a 2008 study done by the National Renewable Energy Laboratory.

Coddington, one of the study’s authors, argued in the paper that there are at least a half-dozen procedures and technologies, now in effect, that prevent power from a small solar array from backfeeding onto a grid – and electrocuting someone in the process.

Rooftop solar panels have inverters, devices that change direct current to alternating current. They only send power out to the grid when they sense power coming from the grid, Coddington said, meaning that when an outage occurs, a home solar system cannot send power out to the grid. Sending a utility worker to shut off a disconnect switch is simply redundant, he said.

It’s also time-consuming, he pointed out, at a time when utilities are under pressure to restore power as quickly as possible.

Coddington pointed out that standard safety protocol requires utility workers to assume all electrical systems are carrying power, and to dress and use tools that would insulate them from live wires. Utility workers who follow standard procedures would not have a problem, he said, even in the highly unlikely event that a solar system was feeding power back to a grid experiencing a power outage.

While Iowa is considering adopting an external-disconnector requirement, the NREL report documents a move away from that in other states. As of 2008, utility regulators in eight states had eliminated their EDS requirement. Another nine states had decided to allow utilities to make their own decisions in the matter.

The reason, according to Coddington: “People started asking them the hard questions.”

The ELPC is a member of RE-AMP, which publishes Midwest Energy News.