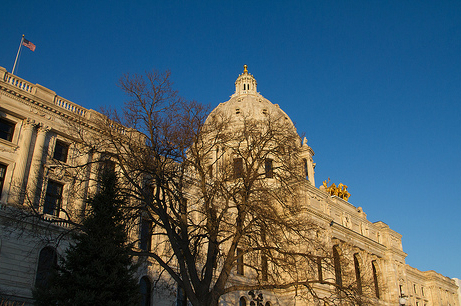 The bills that have risen to the top include an aggressive move to push for high renewable energy standard and a bill intended to clip state agency oversight of Environmental Protection Agency carbon rules.

It’s anyone’s guess at this point what the fate of proposed laws because of the political alignment of the legislature — a Republican House, a Democratic Senate, a Democratic governor. There are no slam dunks for bills from the right or left.

Legislative insiders say that not all the energy-related proposals have been submitted, but several significant proposals are already generating attention.

Supported by environmental, labor, clean energy and religious groups, the legislation would increase the state’s renewable energy standard (RES) to 40 percent by 2030.

The legislation would update Minnesota’s 2007 RES, which calls for 25 percent of energy by 2025 from renewable sources such as wind and solar (Xcel Energy, the state’s largest utility, must reach 30 percent). That original law passed with bipartisan support and was signed by then-Gov. Tim Pawlenty, a Republican.

The state’s utilities are well on track to meet the current goal and could even surpass it. Advocates say the 40 by 2030 is manageable — a study last year by the Department of Commerce showed the state’s electric grid could absorb a 40 percent goal from renewable energy.

She pointed to a Department of Employment and Economic Development study released last year that showed on average the state’s more than 15,300 clean energy jobs paid $71,000 annually.

A higher RES would give a “market signal” to clean energy companies and developers that the state will continue its position as a national leader in the field, she said. The governor’s bill supports the legislation, too.

“Energy is policy driven,” Soholt said, adding developers will head for state with strong RES policies. “If Minnesota wants to continue capturing the good stuff of what this policy has brought about we need to increase our target.”

Many of those high paying jobs would be located in rural areas of Minnesota “that are struggling economically and may even have negative population growth,” said Justin Fay, campaign manager of Minnesota Clean Energy and Jobs, a coalition of organizations supporting the legislation.

The legislation has drawn opposition from opponents who say it is too aggressive and should be put on hold because of the Clean Power Plan has not been finalized.

The legislation would have the impact of helping reach EPA’s goal emission target for Minnesota, Soholt added,  “and would be good for Minnesota.”

Backers of the bill include Fresh Energy and other members of RE-AMP, which publishes Midwest Energy News.

The energy efficiency bill would require utilities to shed .5 percent annually of “supply” side electricity through energy conservation programs. Currently, state law requires a 1.5 percent annual reduction in the “demand” side of electric generation through energy savings’ programs directed at consumers and businesses.

The new law would preserve the 1.5 percent benchmark, said Will Nissen, a policy associate at Fresh Energy.

The .5 percent could come from supply side investments in better voltage control, distribution systems, energy storage and other approaches, he said.

“This bill continues the tradition of energy efficiency programs saving ratepayers money and being the cheapest, cleanest energy resource we have,” he said. “No matter where you stand politically, energy efficiency is a win-win for everybody.”

He believes the bill has a chance to pass this year because has been introduced by a Democrat in the Senate and a Republican in the House.

Rep. Jim Newberger (R-Becker) has introduced legislation that would prohibit the Minnesota Pollution Control Agency from submitting any documents related to the Clean Power Plan without legislative approval.

A House committee approved the measure. Under the proposed federal legislation the state will have to reduce carbon emissions from power plants by 41 percent (from 2012 baseline levels) by 2030. The final rules have not been issued so the amounts could change.

The legislation is part of a national campaign by the American Legislative Exchange Council against the Clean Power Plan. So far the campaign has not fared well, according to the Natural Resources Defense Council.

In addition, the bill would take away power from the executive branch of government, said John Hottinger, a former legislator and the Sierra Club’s lobbyist. He called it a likely “gridlock” bill intended to cause chaos if it moves through both houses.

A bill in the Senate seeks to end Minnesota’s 21-year-old moratorium on construction of new nuclear plants. Similar efforts in past legislative sessions have gained the support of one house but not the other and Gov. Mark Dayton has shown little sympathy for the cause.

Xcel Energy, the state’s largest utility, has no plans to build a new nuclear plant, and high costs have stymied nuclear projects elsewhere.

However, Randy Evans, an Xcel spokesman, told Forum News Service earlier this month that the utility supports the measure.

“We believe it does not make sense to leave any (energy) sources off the table,” he said.

Editor’s note: An earlier version of this story mischaracterized the efficiency legislation.