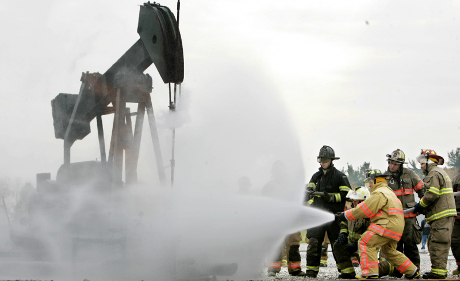 Firefighters from around Ohio fight a derrick fire during a training session at Wayne County Fire and Rescue Training Facility in 2008. (AP Photo/Mike Cardew/Akron Beacon Journal)

Ohio’s oil and gas industry and environmental groups are satisfied with a compromise reached this week on one bill before the state legislature, but both camps remain divided on controversial community right-to-know provisions in another pending bill.

HB 8 aims to streamline procedures for the Ohio Department of Natural Resources (ODNR) to issue orders dealing with oil or natural gas pools as units. The bill would also allow units to include state-owned roads and rights-of-way.

An earlier version of that bill would have revived a broader proposal from last year to allow drilling under state parks. However, that language was removed late Tuesday afternoon before the bill was voted out of committee.

Singling out a single industry

Various environmental and community groups object strongly to HB 64’s language creating an exception to right-to-know requirements for the oil and gas industry.

“This is the second time this has been in front of the General Assembly,” said Trent Dougherty of the Ohio Environmental Council.

Hydraulic fracturing or fracking, pumps millions of gallons of chemically treated water and sand through horizontally drilled wells into shale formations. After wastewater flows back up, oil and natural gas follow. The process has led to a boom in Ohio’s oil and gas production over the last several years, especially in rural areas.

Those oil and gas activities involve a variety of chemicals that would be considered hazardous. Oil and natural gas are both flammable. By their nature, they contain petroleum hydrocarbons. Other chemicals used in drilling, and contained in waste, present concerns as well.

Under the federal Emergency Planning and Community Right-to-Know Act (EPCRA), all industrial and commercial operations with hazardous chemicals on site must provide detailed information to state and local first responders, including local fire departments.

As a matter of practice, however, oil and gas operations in Ohio have generally provided that information to the Ohio Department of Natural Resources instead. HB 64 would write that practice into the law.

“The other industries throughout the state follow what is in the federal law that says that chemical inventory is to go directly to the state and the local emergency responders and the fire departments in that area,” Dougherty noted. “These provisions would allow the oil and gas industry to circumvent the spirit, and the letter, of the law.”

The bill’s language would let ODNR share the information with local authorities. However, it does not require it to be provided in all cases before a possible emergency occurs.

“The oil and gas Chief shouldn’t be the one who is the sole decision maker on whether and to what extent to share this information with the public,” Dougherty added.

Indeed, “a lot is lacking” in ODNR’s track record for getting information out on a timely basis, said Amanda Kiger of the Ohio Organizing Collaborative. The organization is working with Communities United for Responsible Energy and other groups as part of a coalition called SafeOhioNow.

First responders found themselves at a loss when a well pad fire erupted last June in Monroe County, Kiger said. The U.S. Environmental Protection Agency later criticized ODNR for its actions in that case.

Even if ODNR had the data, local firefighters “had no clue how to access the information,” Kiger said. If the site operator had given the information directly to the local authorities beforehand, “I believe some of the damage could have been avoided,” she added.

Kiger also sees the inclusion of an exception from chemical hazard disclosure requirements in the governor’s budget bill as a “ploy.”

“I feel like they were trying to slip it past us,” she said. “It has no business being there whatsoever.”

Shawn Bennett of the Ohio Oil & Gas Association (OOGA) defends the approach outlined in the bill.

“OOGA has always been committed to giving first responders immediate access to necessary information, which is why we worked with first responders, ODNR, Ohio SERC [State Emergency Response Committee] and the state legislature to allow the industry to file annual EPCRA reports through the ODNR database,” he said.

“Currently, the ODNR is in the process of updating its online database, which stores information required under EPCRA; oil and gas producers through this database would report all information required by the federal law,” he added. “These updates will allow first responders and the public immediate access to find pertinent information in a more user-friendly manner than searching through boxes of paperwork in the basement of a local fire department.”

Doing that would require emergency responders and local firefighters first to be able to navigate through ODNR’s website, Kiger said. She added that she herself finds that to be a daunting task and would not necessarily expect volunteer firefighters to be prepared to search ODNR records when an emergency arose.

In addition to the community right-to-know provisions, HB 64 would impose heavier penalties for violations of the state’s oil and gas regulations. The bill would also substantially increase the state’s revenues from severance taxes for horizontal drilling.

Under the proposed increase, taxes for natural gas could go up by roughly five times the current rates, based on recent prices. Taxes for oil could rise by an even greater percentage.

The proposed changes “are of great concern to our members,” said Bennett, especially since they would be due “whether or not a profit is made by oil and gas producers.

“Given the current state of the industry in Ohio due to the crash in commodity prices for natural gas, natural liquids and oil, it is our position that this is the absolute worst time to increase severance taxes on an already struggling industry,” Bennett added.

Daugherty commended both the tax and the penalty proposals. Instead of having any increased revenues offset a lower state income tax, however, he would like the money to pay for more regulatory oversight and help local communities with substantial oil and gas-related activities.

Another proposal to increase the severance tax failed to pass last year, however. “The crystal ball is a little bit cloudy for the severance tax increase, I fear,” Daugherty said. Lawmakers resisting the increase have talked about the unfairness of singling out a particular industry, he added.

On Wednesday, the Ohio House of Representatives also passed HB 8, sponsored by Republicans Christina Hagan of Alliance and Timothy Ginter of Salem. The vote was 96 to 0.

The proposal would set time limits and expand existing law for orders allowing “unit operation” or unitization, of oil or natural gas pools. If 65 percent of the owners of the pool’s acreage otherwise agree to drilling, an order basically compels owners of the remaining land to allow drilling under their land.

“The Ohio Oil and Gas Association supports House Bill 8, which simply establishes a timeline for unitization orders to be decided by the Ohio Department of Natural Resources,” Bennett said. “Currently, the industry and landowners are not able to get timely consideration of unitization orders, which can negatively impact the organized development of Ohio’s oil and gas resources.”

An earlier version considered by the committee was not so simple. It would have revived a proposal from last year to allow drilling under all state-owned lands, including parks and wildlife areas.

Environmental groups saw the language as an attempted “end run” around the existing moratorium against horizontal drilling for oil and natural gas in Ohio state parks.

That moratorium went into effect last year after public outcry erupted over a plan by ODNR to work with the oil and gas industry to “marginalize the effectiveness of communications by adversaries” of fracking on state lands. The Sierra Club made that plan public last winter after receiving a copy of the agency’s draft communications plan dated August 2012.

However, the version of HB 8 that was voted out of committee on Tuesday excludes state parks from oil-and-gas unitization requests. It also prohibits surface disturbances to state forest lands.

“Amendments to House Bill 8 ensure that there will be no surface impacts to state owned properties that are unitized, as well as exclude state parks from the unitization process,” Bennett noted. “With these changes the bill earned bipartisan support and was voted unanimously out of the House Energy and Natural Resources Committee.”

“This amendment stops the land grab of state parks and forests in its tracks,” said Dougherty. “The bill addresses the industry’s concerns of public lands stopping otherwise viable drilling units, but limits its impact so that the state’s protected lands stay protected.”

The Ohio Environmental Council and the Sierra Club are members of RE-AMP, which publishes Midwest Energy News.