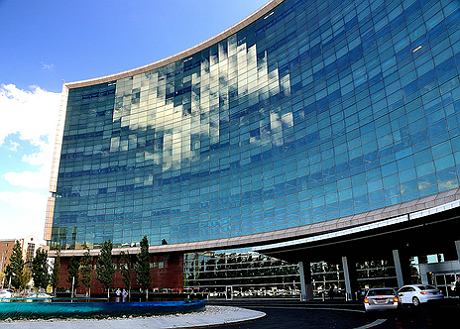 Energy savings at the Cleveland Clinic free up resources for patient care. (Photo by Steve Grant via Creative Commons)

Representatives of the U.S. Department of Energy and the City of Cleveland were on hand Monday at the city’s Fire Station No. 1 to recognize local leaders in DOE’s Better Buildings Challenge.

Participants in the federal program publicly commit to decrease their energy consumption by at least 20 percent over a 10-year period and to share their know-how with others. Energy efficiency is a key part of the U.S. Environmental Protection Agency’s proposed Clean Power Plan.

Monday’s program gave kudos to both the Cleveland Division of Fire and the Cuyahoga Metropolitan Housing Authority for reducing energy consumption and cutting costs for area taxpayers.

Also honored were the commercial real estate company Forest City Enterprises and the Cleveland Clinic. Both organizations have their headquarters in Cleveland.

The energy savings achieved by the organizations put them well ahead of the benchmarks utilities must meet under the current version of Ohio’s energy efficiency standard. Last year Ohio Senate Bill 310 extended that standard’s timetable and relaxed its requirements.

The Energy Mandates Study Committee set up by SB 310 continues to focus on costs, and some members question the value of the state’s renewable energy and energy efficiency standards. Little was said about the benefits of energy efficiency when the committee held its most recent meeting in Columbus last week.

In contrast, those at Monday’s program in Cleveland praised energy efficiency for its cost-effective savings and additional benefits.

A smaller energy footprint can help businesses compete, noted Joyce Mihalik of Forest City Enterprises. More local governments are asking for energy usage information, but so are more of the companies that Forest City does business with.

“The call for transparency and disclosure of energy use in buildings will likely increase,” she said. “Asking for energy data will be a common question among future tenants.”

“Energy efficiency offers a twofold opportunity for Cleveland’s economy,” stressed Jenita McGowan of the city’s Office of Sustainability. “First, new business opportunities are born out of energy efficiency and conservation in the manufacturing and construction sector.”

“Secondly, energy efficiency can enable city governments, businesses and residents to save money,” she continued. They can use that money to “invest in other more important things.”

For the Cleveland Clinic, those other more important things center on patient care.

“It’s never been more important for health care organizations to take on energy efficiency as part of their care delivery,” noted John Utech of the Cleveland Clinic. “As we reduce our energy intensity, that frees up resources for patients.”

Beyond that, he noted, reducing energy usage leads to a “clearer environment for a community.”

In other words, lower demand could lead to less need to run coal-fired power plants and result in better air quality.

The Cleveland Clinic has cut energy usage by 9 percent reduction so far.

Even something as simple as a bank of glass doors for accessing refrigerated supplies can save money, noted the Cleveland Clinic’s Joe Seestadt during a follow-up tour of the Tomsich Pathology Laboratories. Staff members only open a door a single time to get a particular supply item, rather than once on the way into a cooler room and once on the way out.

So far, the City of Cleveland has reduced its energy use by about 5 percent, with annual utility bill savings of roughly $2 million per year. “We are continuing on this trajectory,” McGowan reported.

Energy efficient lighting is a “no brainer,” noted Matthew Gray, also with the Cleveland Mayor’s Office of Sustainability. “It’s low-hanging fruit,” he added, meaning that projects are relatively easy to do and achieve savings quickly.

In the debates leading up to enactment of SB 310, utilities and others who wanted to eliminate or scale back Ohio’s energy efficiency standard claimed that few such easy-to-achieve savings were left.

However, FirstEnergy’s vice president Leila Vespoli noted in 2013 that only a small percentage of customers were participating in the utility’s energy-efficiency programs at that time. The company eliminated most of those programs in the wake of SB 310 last year.

Speakers at Monday’s program echoed this sentiment. They were enthusiastic about their organizations’ commitment to the Better Buildings Challenge. And they encouraged other businesses, organizations and governmental bodies to embrace energy efficiency as well.

“We at the fire station are committed to energy efficiency,” stressed Kelly. “It helps us reduce our operating costs. This is money that can go into other areas to help us meet our core mission, which is protecting lives and property from fire and other hazards.”