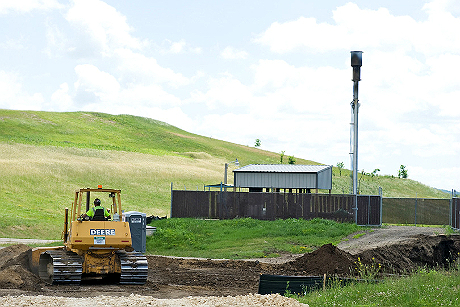 The hospital did this thanks in part to two combined heat and power (CHP) projects that generate electricity and use the waste heat from that generation. CHP is an important way industrial, commercial and other institutions nationwide can greatly increase their energy efficiency and reduce emissions from fossil fuels, and hospitals are often especially suited to embrace the technology.

Hospitals use massive amounts of energy, both electricity and heat, in part because of the rigorous sterilization, air circulation, food service and waste disposal practices they must employ. Hospitals operate around the clock, and serve large numbers of people.

At the Gundersen campus, 4,000 patients, employees and visitors pass through every day. In fact hospitals use about 2.5 times as much energy as similarly-sized commercial buildings, according to the U.S. Department of Energy (DOE).

Hospitals are increasingly embracing CHP, often benefitting from incentives built into utility rate structures or state efficiency portfolio standards. Such incentives are likely to become increasingly common as awareness is increasing about the benefits of CHP, and it may figure into states’ plans to meet their emissions reductions mandates under the U.S. EPA’s Clean Power Plan. In 2012, President Barack Obama signed an executive order calling for 40 GW of new CHP by 2020.

Then in 2013, Gundersen unveiled a biomass CHP operation that uses woody waste from nearby lumber operations to power a boiler that generates steam needed for heating and humidifying the building in winter and for sterilizing instruments and materials year-round.

The heat from that boiler is captured and funneled back into the system, greatly increasing its efficiency and reducing costs. This CHP boiler allowed the system to retire older boilers that did not capture waste heat. The steam from the boiler is also used to power a turbine and generate electricity, which is sold back to the grid, enough to power 225 homes, according to the company.

“We know we can’t conserve our way to zero energy, so somehow we have to create our own renewable energy,” said Alan Eber, engineering and energy manager of Envision Gundersen Health System, which also has contracts with nearby wind, solar and dairy digester power providers.

CHP systems can involve a variety of fuel sources and generation types. Gas turbines, microturbines, reciprocating engines and fuel cells can all be used for CHP. Fuel sources include natural gas, biomass and coal.

Since Gundersen is located in the heart of Wisconsin logging country, their biomass is easy to obtain. Gundersen gets three daily deliveries from six different suppliers within a 50-mile radius, hauled by two different trucking companies.

“These are the people who come to our healthcare facility and get their care here,” said Eber. “We’re putting that money directly back into our community – helping the health and well-being of our community, which just feels great. These suppliers aren’t just suppliers, they’re true partners.”

Burning wood does raise its own challenges, including controlling particulate emissions, fugitive dust, ash and even the odor. “You can’t have a campfire smell in a hospital,” noted Eber. He said Gundersen worked closely with the state Department of Natural Resources to make sure the boiler was working as efficiently and cleanly as possible and in keeping with state regulations. They use only virgin wood that has no chemicals or lacquers applied, and the bark is removed.

Gundersen always keeps a three-day supply of wood on hand, to get them through a weekend or any big Wisconsin snows. Hospitals are required to have emergency generation on standby; Gundersen has diesel generators that can be fired up within 10 seconds, as required by state law. Eber wishes the company was allowed to run this backup power on an ongoing basis and use it for CHP. He said that regulatory codes don’t allow that, something which he would like to see change in the future.

Meanwhile CHP generation systems themselves serve as a reliable form of power and emergency generation for hospitals, since they continue to operate even if there is an interruption of power from the grid. Hospitals are especially vulnerable to momentary “sags” in voltage on the grid, which can interrupt sophisticated diagnostic tests or other medical operations, says a 2007 guidebook on CHP and hospitals published by federal agencies.

CHP was a lifesaver for Mississippi Baptist Medical Center in Jackson during Hurricane Katrina, helping the hospital survive a 52-hour blackout, as noted in the guidebook. There is often only enough diesel fuel onsite to power emergency generators for hours, the guidebook says, whereas CHP operations can typically run independent of the grid for days.

A U.S. Department of Energy fact sheet on CHP and hospitals says that during the massive blackout in New York City in 2003, 58 percent of hospitals saw failures in their backup diesel generators. CHP could be considered more dependable since CHP systems aren’t turned on only in an emergency, when they may fail unexpectedly.

In 2009, New York-Presbyterian Hospital installed a 7,500 kw gas turbine CHP system that was estimated to save the hospital $5 million per year and reduce carbon emissions by 67,000 tons annually, providing for all of the hospital’s baseload electricity needs and a substantial amount of its power even during the times it uses most electricity, according to the DOE factsheet. Similarly a CHP gas turbine system installed by Dell Children’s Medical Center of Central Texas in 2007 saved millions of dollars that were reinvested in other conservation measures, according to the DOE.

Eber said there is a payback time of about 12 years for the LaCrosse campus boiler. Last year, he said, the company spent about $660,000 on biomass fuel, compared to about $920,000 they would have spent on natural gas for heating the hospital. In all the boiler saves about half a million dollars a year, the company says.

The U.S. Department of Energy has programs to promote increased adoption of CHP, including by hospitals specifically. Cliff Haefke is Midwest director of a DOE program to promote CHP, and a leader with several CHP trade and academic organizations. He spoke along with Eber during a webinar sponsored by the Midwest Energy Efficiency Alliance on March 24.

CHP “makes sense at a lot of facilities though it needs to be looked at on a case by case basis,” Haefke said. “Higher efficiency translates to lower operating cost but requires capital investment.”

Haefke said the outlook for CHP in the Midwest in coming years is rosy, as utility companies begin to see it as a potential asset rather than a threat to their business and as elected officials and regulators embrace it as a way to meet efficiency and emissions reduction goals.

CHP capacity in the Midwest has increased from just 26 MW in 2005 to about 180 MW today, according to government statistics Haefke cited, with a great leap of about 100 MW in 2013. There is potential for a whopping 1,500 MW of CHP in Midwestern hospitals, the DOE says.