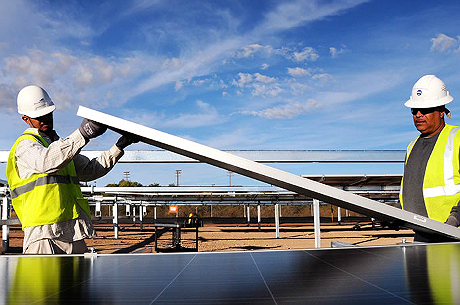 Earlier this year, a major Minnesota construction company announced an agreement with the solar developer SunShare, LLC  to collaborate on future projects in the budding community solar garden market.

It should come as no surprise that M.A. Mortenson Company would want a piece of the community solar action, as it has quietly become one of the nation’s leading builders of solar installations.

The company’s solar staff has increased from dozens to hundreds over the past three years, a clear reflection of the industry’s skyrocketing growth.

While Mortenson has agreed to build Sunshare projects in Minnesota the arrangement does not preclude it from working with other developers, said Trent Mostaert, general manager of the Renewable Energy Groups. “We want to help developers build as much solar as possible in Minnesota.”

The gardens will all be significantly smaller than Mortenson’s largest project to date, the 597 MW Solar Star I and II in California, the biggest solar photovoltaic (PV) farm in the world. The 4,700 acre site required 85 miles of roads to install 1.7 million panels.

Other big projects include the 400 MW Alamo project being developed by OCI Solar Power outside San Antonio. Part of the project features the world’s largest use of dual-tracking panel technology, which follow the sun to optimize energy production of the panels, he said.

Another well-publicized project was the 30 MW Alamosa Solar Generating Project in Colorado that deploys panels that follow the sun’s movement and lenses that concentrate light energy 500 times.

Mortenson also built one of the larger solar farms in Minnesota in 2009 at St. John’s University. The facility’s 1,800 panels have a 400 kilowatt capacity. The installation taught Mortenson a great deal about siting panels correctly and executing larger projects, Mostaert said.

The company’s website points to 23 solar projects, the latest completed or under construction in California, Texas and Colorado. The list will likely include a Minnesota project or two as Xcel Energy, Inc. begins announcing which solar garden proposals have been approved.

It was that background that looked appealing to Sunshare’s founder and CEO David Amster-Olszewski. Mortenson “has some of the best people I’ve worked with in the industry,” he said.

“We wanted to partner with a firm that has strong roots in Minnesota, that could help boost the local economy, along with helping us to deliver clean power to thousands of residents and businesses in Minnesota,” Amster-Olszewski said in an email.

Having a major solar installer in the state is important as community solar and utility-scale solar projects begin to take shape.

“It’s great to have them in Minnesota,” said John Kearney, executive director of the Minnesota Solar Energy Industries Association. “Having one of the biggest solar installers in the country here will help us develop the industry, which is expected to grow from $150 million today to $1 billion in three years.”

Mortenson is known more around the Twin Cities and Minnesota as a builder, often of the kind of marquee structures that attract eyeballs and architectural critics. Among them are the Minnesota Vikings new stadium, the Minneapolis Central Library and the Minnesota Orchestra Hall renovation.

It has 11 offices, five of them in the Midwest, where it does a lot of business.

Outside of bricks and mortar the $3 billion family-owned company has had a large involvement for years in energy through the departments focused on transmission and renewable energy, mainly wind and solar. The renewable division’s solar group placed third in the number of installations of utility-scale solar PV projects, according to a 2014 Bloomberg New Energy Finance report.

Three years ago, Mosteart said, Mortenson had 30 “craft” staff members that installed panels and 30 non-craft management staff. Today the craft staff reaches as high as 700 on projects, while the non-craft count stands around 100.

“It’s been phenomenal growth for us,” he said, speaking in the company’s suburban Minneapolis office near Wirth Park.

The company provides many aspects of solar production, from modeling to design and pre-construction. Every project arises out of a different set of needs and requirements, from California laws mandating the production of more renewable energy to market-based moves by progressive utilities such as CPS Energy, the buyer of the Alamo project’s electrical output, he said.

Each job is organized well in advance and then assigned to a group of “travelers” with impressive frequent flyer mile totals who head for the project site and “jumpstart the team” and begin hiring locally, he explained.

In general, about one quarter of the installation team will be Mortenson’s traveling staff, the rest from the local solar installer community, he said. On the Alamo project more than 500 workers participated in creating the solar farms over a six month span.

“There wasn’t much built in Texas at the time so we had to hire 400 to 500 craft workers and train them all as we ramped up,” he said.

When speaking of the potential roadblocks to creating more solar, Mosteart points to a lack of trained workforce, both nationally and in Midwest, that could slow installations as the threat to the end tax subsidies for solar.

Market analysts believe as much as 20 gigawatts (GW) could be installed over the next two years, an increase from 6 GW this year. “There are not enough craft workers who know how to install that much solar PV,” he said.

The problem could grow more acute in Minnesota, where a booming community solar garden industry looks to take off. He sees plenty of need for more training in the state to take full advantage of the solar boom.

If training more solar craft workers is essential, so is getting the policy right, the company argues. The 30 percent investment tax credit will lapse after 2016 and if Congress dithers — or battles — over renewing it the industry could suffer.

“We don’t want to end up building this big craft-work bench strength and then have nothing get built,” he said. “We need better certainty on the policy.”

Finally, Mostaert would like to see more transparency by Xcel in assisting solar garden developers in selecting sites where interconnections to the electric grid can be most effectively made.

“Community solar will prove to be a great ‘bridge’ for bringing utility solar to our commercial customers,” he added. “It will open up a whole new pipeline of business.”

As Mortenson moves forward on large projects it has looked at placing solar on the rooftop of its corporate campus. While some of the company’s power is offset by wind energy it wants to add onsite solar to the campus.

Yet since the company uses a fair bit of energy — 3 MW annually — it cannot carpet the campus with enough panels to meet that demand, Mostaert said. Instead, it will likely become a subscriber to one of Sunshare’s solar gardens.

In fact, the company’s looking forward to building those gardens. Since the St. John’s project it hasn’t done much solar in Minnesota. “It’s good to see it coming home,” he said.

Editor’s note: Mortenson Construction is a donor to Fresh Energy, where Midwest Energy News is based.