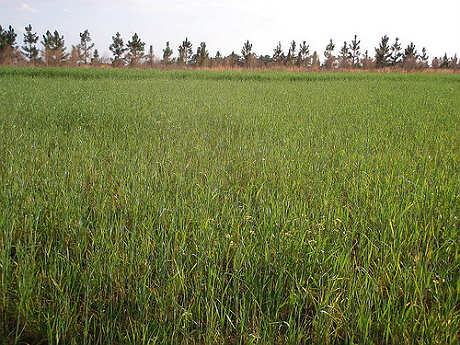 A Minnesota bill will require a certain percentage of advanced biofuels to be derived from cover crops like rye to be eligible for tax credits. (Photo by John S. Quarterman via Creative Commons)

Environmentalists and bioeconomy advocates reached an agreement last week to modify a bill moving through the Minnesota legislature that they hope will create a new clean energy and green chemical industry in Minnesota.

The BioEconomy Coalition of Minnesota amended the legislation, HF 536 and S 517, to include provisions to protect water quality and study incentives for farmers. The bill has been approved by several committees in the House and Senate with bipartisan support.

The legislation’s main goal is to establish a $5 million production tax credit that will be available to advanced cellulosic biofuel and green chemistry producers starting July 1.

The bill initially met with opposition from the Minnesota Environmental Partnership and Friends of the Mississippi River, who expressed concern that it would encourage greater corn production and harm the state’s water resources.

“All the groups have gotten together and we’ve reached an agreement on an amendment that addresses the concerns that the environmental groups had about the bill,” said Brendan Jordan, vice president of Great Plains Institute, which manages the bioeconomy coalition.

Trevor Russell, water program director for FMR, said it is a rare piece of legislation that carries the support of the agricultural, environmental and clean energy communities.

“I think the bill will have a really positive impact,” he said. “Minnesota is poised to become a national leader in advanced biofuel and green chemistry. That’s exciting.”

The bill now requires producers building cellulosic ethanol plants to use a certain percentage of perennials and cover crops. Under the bill, the percent escalates from 10 percent in a facility’s first year of operation to 50 percent the fifth year, Jordan said.

Cover crops such as winter rye are grown in the offseason to maintain the soil.

Operations using wood, sugar and corn starch to produce renewable energy, chemical products and biomass thermal energy would not have to meet the requirement, he said.

“The changes around perennial requirements only impact cellulosic biofuel facilities that use crop residues as their feedstock,” Jordan said. “Nothing about any of these changes delays the program in any way.”

Another change to the bill would earmark money for the state’s Board of Water and Soil Resources to design a feedstock program to incentivize farmers to grow perennials and to assist producers in developing biofuel technology.

A study by the bioeconomy coalition suggests Minnesota could create a new $840 million industry with thousands of new jobs.

“We cleared a major legislation hurdle, our coalition just got stronger with the support of the environmental community and we have no organized opposition,” Jordan said. “I’m proud we were able to work hard and come to an agreement that everyone can not just live with but be excited about.”

The Great Plains Institute and the Minnesota Environmental Partnership are members of RE-AMP, which publishes Midwest Energy News.