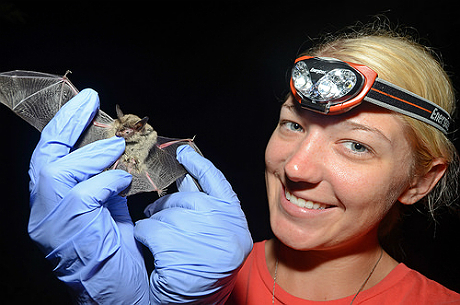 A researcher holds a Northern long-eared bat in Oklahoma in 2013. (Photo by Georgia Wildlife Resources Division via Creative Commons)

Editor’s note: The decision on the bat listing is expected to be announced April 1. An earlier version of this story incorrectly stated the announcement date.

Wind energy in parts of the Midwest could be impacted if the federal government announces this week that it is listing the Northern long-eared bat as an endangered or threatened species.

Populations of the bats, indigenous to most of the eastern half of the U.S. and considered a crucial form of insect control for farmers, have plummeted over the past decade due to a disease known as White-Nose Syndrome. A fungal disease, it invades the skin of hibernating bats and disrupts both their hydration and hibernation cycles. Infected bats tend to fly out of their caves in late winter, when they should be hibernating, and exhaust and dehydrate themselves while searching for insects that haven’t yet hatched.

In addition to that, the bats — like birds — sometimes die from flying into, or too close to, the rotating blades of wind turbines.

Listing of the animal as endangered or threatened would likely result in wind farms taking measures that could reduce their power production and/or increase their costs.

In October 2013, the U.S. Fish and Wildlife Service (FWS) proposed listing the bat as endangered or threatened, and solicited feedback on whether it should be protected under the provisions of the Endangered Species Act. The impending announcement is the culmination of that process.

While the toll of White-Nose Syndrome is significant, the impact of wind turbines is much smaller, but has also been more difficult to document.

“I think right now, from the east to the Midwest, 40-some (Northern long-eared bats) have been documented killed at wind-energy facilities,” said Rick Amidon, who coordinates habitat conservation plans for FWS.

While conceding that it’s a rather small number, Amidon said, “it’s hard to find these little brown things. If you have standing crops, it’s almost impossible to find them. We have very little confidence [in the estimate of deaths.] We think more are being [killed] than are being found.”

A survey done in Pennsylvania from 2007 through 2011 found three dead Northern long-eared bats at wind farms that were monitored in the state. That amounted to less than one percent of bat fatalities.

Regardless of actual mortality numbers, the “take,” or accidental killing, of an endangered species is a violation of the Endangered Species Act unless an “incidental take permit” has been obtained, said Georgia Parham, a spokeswoman for the Midwest region of the FWS.

Parham said the FWS would “strongly encourage” the responsible party to develop and institute a “habitat conservation plan” aimed at both preventing additional deaths and enhancing bat habitat elsewhere.

The American Wind Energy Association calls that process a “burden.”

“If everything ceased today that is impacting the bat, it still would be a candidate for listing based on the impact of the disease,” said Anderson, the association’s senior director for permitting policy and environmental affairs. He questioned “putting a conservation burden on activities that are not having a significant effect. The wind industry is one of them.”

And, he pointed out, while wind energy does have some impacts on the environment, they are far more modest than those caused by the production of energy using coal, natural gas and nuclear power.

Although the law doesn’t permit the agency to require any measures to prevent or compensate for losses, Parham said the FWS strongly encourages all operators of wind turbines in areas with endangered species to minimize the risks to bats and other endangered species when they are developing their wind farms.

“We have an enforcement arm that can pursue an investigation, depending on the circumstances,” she said.

Listing of the Northern long-eared bat likely would follow the path laid down by the Indiana bat, an endangered species that is found in some areas with wind farms as well. A few wind farms have adopted, or are now developing, habitat conservation plans, which in effect allows them to kill a specified number of endangered animals.

Owners of the Fowler Ridge wind farm in northwestern Indiana developed a habitat conservation plan after two endangered Indiana bats were found dead there. The wind-farm owners agreed to feather the blades of their turbines below a certain “cut-in” speed – the wind speed at which the turbines begin to spin – every night from August 1 through Oct. 15, when most bats die from encounters with wind turbines. At that time, they typically are migrating from their summer homes in forests to their winter hibernation grounds in caves.

The owners also agreed to preserve and restore summer maternity habitat near existing Indiana bat maternity colonies in several Indiana counties, and to erect a bat gate near the entrance to an important cave.

A wind farm planned for a site in Champaign County, Ohio recently received approval to “take” 26 Indiana bats over a five-year period, provided it takes some conservation measures.

Mike Speerschneider, chief permitting and public policy officer at EverPower Wind Holdings, which is developing the Champaign County site, said the company is willing to increase its cut-in speed from about 3.5 to 6 meters per second. This can be helpful to some species of bats because they tend to fly into turbines that are spinning at lower speeds.

It will reduce the wind farm’s power production – and its bottom line, according to Speerschneider. He estimates that total power production would fall by perhaps a few percent over the course of a year.

“When you consider that the margins on these projects are pretty thin,” he said, “that could be the difference between selling power at a competitive rate, versus not.”