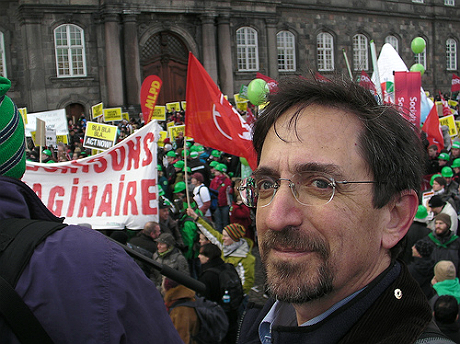 Andrew Revkin at a climate march in Copenhagen in 2009. (via Creative Commons)

Environmental writer Andrew Revkin has worked for over 30 years as an author, reporter, columnist, instructor and songwriter.

His travels have taken him around the globe, covering topics from the murder of an environmental advocate in the Amazon rainforest to interference in science communication at the White House. But his start in covering global warming in the early ’90s was the basis for an overall theme of his sustainability coverage — how we as a species will survive on earth as population surges amid finite resources.

That is the context in which Revkin started his widely read Dot Earth blog while reporting for the New York Times, which he still updates regularly. About five years ago, Revkin transitioned to the paper’s editorial pages and has also moved to academia, where he is teaching the next generation of reporters as Pace University’s Senior Fellow for Environmental Understanding.

Revkin was the keynote speaker at the Michigan State University Environmental Science and Policy Program’s “Fate of the Earth” symposium April 1. The conference schedule was filled with leading researchers on sustainability issues who all addressed the same theme that Revkin explores in his blog: How will the human race sustain itself on a planet with dwindling resources?

“The big debate is are we going to consciously shape it or do what bacteria have done: Hit a wall and then have nature enforce limits on you,” he said during his talk.

Revkin spoke with Midwest Energy News after the conference to elaborate on our trajectory, cutting through partisan politics and the need to develop more clean energy.

Midwest Energy News: There seems to be an overwhelming disconnect between the scientific discussion of sustainability and climate-change research and what plays out publicly and in policy discussions. What has been your strategy over the years to try and connect those dots on a local or regional level?

Revkin: It’s very hard. … It gets at what I was saying about the scientific process being the thing that needs to be clarified — how science works — not so much the data. One misperception people have is that because scientists are arguing, that means we don’t know anything. That’s actually not true at all. So the more you know about how science works, the less likely you are to fall into that trap.

Does the political atmosphere make it difficult to be optimistic about consensus or solutions?

If the conventional approach is taken to getting things done, yes. One thing I didn’t mention (in my talk), though, is that the same social science that shows you how poorly we perceive some of these problems also has shown very clearly that you can have a lot of overlap of concerns between, for example, libertarians and environmentalists. I know lots of conservatives who are passionate about energy conservation, not because they care about global warming, but because they care about Middle Eastern oil — things like that.

At least one Tea Party activist has been engaged in the Midwest in support of distributed generation amid utility concerns.

Which is the sort of freedom to do what I want to do. That’s another opportunity.

Following your coverage of the Bush Administration’s interference with science communication, you spoke in an interview about how the transition might play out under Obama. How would you rate President Obama’s environmental record?

Someone at the conference earlier today brought up the term “pragmatic possibilist.” Obama has been a pragmatic activist. He’s done a lot of things. He’s moved forward with regulating CO2 from power plants. It’s very slow and minimal and only for new power plants, and everything is in the early stages on existing power plants. But that just reflects the political reality: This is a slow process.

He’s moved a lot on auto efficiency and other standards. He has focused a lot on resilience and science education. I think he’s done as good of a job as you could expect anyone to do given our political landscape. He gets punished by the green left for supporting natural gas as a path off coal, but I’m with him on that.

You said in your speech that we as a species are in a “race between our potency and our self-awareness.” Can you elaborate on that?

We’ve been wandering around having climate-scale influences, but it’s only been the last generation or two that we’ve been aware of that.

Devastating marine fish populations, damaging coral reefs and the buildup of greenhouse gases has happened without us being aware of it. That was like our childhood, when you run around and break stuff. Now it’s like we’re at that transition we all go through between puberty and adulthood — when you start to slowly realize that your actions have consequences and that you’re responsible.

Theoretically, awareness breeds responsibility. So we’re now at this juncture going from adolescence to adulthood, but at a species scale. That’s why it’s kind of turbulent and weird.

But there’s another element to it: How we communicate — our whole way of thinking and communicating — is just as momentous as the environmental changes we’re propelling in landscapes around us. Even how we communicate, this idea of the global mind and global flow of ideas: We have no clue how that’s going to play out. We’re building a new wiring for our species’ ability to think. I think it’s going to be a good thing overall, but it’s turbulent — like adolescence.

You pointed out that the amount of federal research funding for energy hasn’t changed much since the oil crisis of the 1970s. On this point, you said there is a “bipartisan slumber party” going on. What did you mean by that?

I do try quite often to look for places to depoliticize these issues. Too often you hear: “Oh, those anti-science Republicans,” when historically that has not been the case. It’s anti-science America.

At least for energy sciences, it’s not Republicans (blocking progress). We’re still riding on the fumes of the space race. That propelled the electronic revolution, but we’ve kind of gone to sleep. It’s been such a powerful afterglow, but we don’t realize that — looking ahead at this energy issue — we need more energy and every way we get it now is either too costly or too polluting. That’s a big challenge.

In Michigan, lawmakers are debating a new energy policy as the state’s 10 percent renewable portfolio standard levels off at the end of the year. In your speech, you mentioned that there is quite often too much focus on numbers and hitting those numbers but not about what should be best practices going forward. Do you think the debate over a new target number is missing the bigger picture?

I’m a fan of a clean-energy portfolio that also would include nuclear. We don’t have the politics to create that many nuclear plants anyway, but I think the focus should be clean energy, not renewable energy.

So, you favor overall emission-reduction plans over time rather than a standard met with certain technology?

Personally, yeah. A big chunk of Germany’s renewable portfolio is biomass where they will take trees to burn in a power plant with coal. A lot of their trees come from the American southeast. They’re importing our forests to Germany to burn in their plants and that’s theoretically green. It’s not when you look at the carbon economics, it’s a scandal. I hate that stuff. If that’s the way you’re going to meet your mandate — I’m not saying that’s going to happen here — just all these mandates that end up being gamed are not always done so constructively.