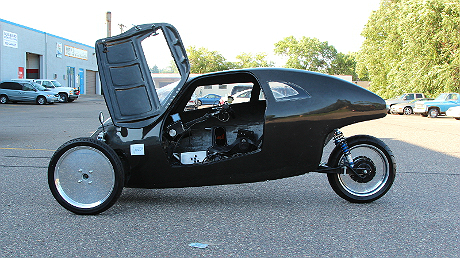 The Raht Racer - an electric-assisted hybrid bike -- is one of the projects in this year's Clean Energy Challenge. (Photo courtesy Rich Kronfeld)

An electric bike that can go 70 miles per hour developed by a professional comedian; wind energy that doesn’t need a turbine; a wireless automated “light sentry” and a way to make electricity from nuclear waste.

These projects are all hopefuls in the Clean Energy Challenge finals on April 14, the competition run by the Clean Energy Trust in Chicago which provides funding, mentorship and other opportunities for early stage clean energy companies.

With finalists in early stage and student categories, this year the Challenge will invest a total of $1 million in participating ventures, 10 times the money invested in the inaugural challenge in 2010. The Clean Energy Trust says that more than 60 companies involved in the Challenge in the past have gone on to raise $46 million in additional funding and created about 300 jobs.

Sponsors of the Challenge include the U.S. Department of Energy and the Pritzker Foundation. Midwest Energy News is a media sponsor for the event.

Rich Kronfeld liked biking to his job at a Twin Cities TV production studio. But it took three hours out of his day and he worried about rain and leaving work early enough to get home before dark. So he decided to develop a vehicle that would allow him the exercise and thrill of biking but get him to work more quickly.

He and his partners developed the Raht Racer, a pod-like vehicle powered by pedals and an electric motor that can reach speeds of 70 miles per hour.

Kronfeld quit his successful show business career — which had included acting, directing and producing for TV shows on Comedy Central and other channels — to focus full-time on the Raht Racer. The name stands for Recumbent Automotive Human Transport. It’s inspired by European “velomobiles” — recumbent bikes in sleek aerodynamic shells.

There are many electric-assist bikes on the market, but Kronfeld says the Raht Racer is unique in the speeds it can reach and its safe enclosed design, with a roll cage, seat belts and headlights. It also can allow the rider/ driver various experience options. The motor can be set to mimic the natural terrain, so that even with the powerful electric assist it will be harder to go uphill and easier to go downhill. Or it could be programmed like a stationary exercise bike to provide a customized workout, complete with hills even if the road is actually flat.

“An analogy is it’s like a guitar amplifier,” Kronfeld said of the motor’s relationship to pedaling. “If you take an electric guitar that’s not plugged in and strum it, it doesn’t make much noise. But when you plug it into the amplifier and turn it on and turn the sound up, it gets really loud. The amplifier is taking what you’re doing and multiplying it many times over.”

Kronfeld said he’s gotten the Raht Racer prototype up to 70 miles per hour on a dyno-testing machine and that he’s ridden it at about 45 miles per hour on the road. He said the vehicle is still rough around the edges, but he hopes future funding will help him perfect the design and operation.

The Raht Racer is meant to appeal first to athletic thrill seekers, the types of people who ride ATVs and motorcycles. But if it were produced cheaply enough it could also be a perfect option for commuting, Kronfeld said.

Pedaling recharges the battery and it can also be charged from a standard outlet. The battery is small enough it could be fully recharged while someone is eating lunch, Kronfeld said; it charges exponentially more quickly than an electric car.

“Apart from Tesla, when you look at hybrids and electric vehicles they’re kind of nerdy or geeky, they don’t project some sort of awesomeness,” Kronfeld said. “Part of the reason I did this was the practical reasons, so I could bike commute wherever I wanted. I also wanted to show that you can do something sustainable and have a lower carbon footprint and still have it be awesome and cool and fun.”

In a technology they developed and tested with a tiny sample of radioactive Strontium-90, an electrochemical reaction in radioactively decaying waste could be harnessed to create electricity. The reaction is somewhat akin to what happens in a battery, but there’s an important difference. While a battery is essentially a platform to store energy created by a charge, the nuclear waste is constantly letting off energy as it decays.

“We use that radiation to actually do work on a gas and actually turn it into a pseudo-plasma,” said materials science major Ian Hamilton, the inventor of the technology and chief technical officer of the students’ startup company. “This gas is then easier to flow current through, basically it collects the charge, and then we can create a path for the charge to recombine and go back to a stable form. That requires the electrons to flow around a circuit, and then we have current and voltage.”

Their original idea was to use nuclear waste to create electricity in “back packs” that could be used in military or other mobile settings. But the safety and regulatory challenges seemed too daunting, and on the advice of a mentor from the Clean Energy Challenge, they “pivoted,” as Hamilton put it, and redesigned their plan to involve setting the technology up in nuclear waste storage casks, at reactor sites, where the electricity could be fed right to the grid in tandem with the power plants’ generation.

“Nuclear decay is going to happen whether or not you want it to – it’s constantly going to break down and radiate energy but currently all that energy is not being used,” said Josh Auger, a mechanical engineering student and chief designer of the startup. “You can extract power from the source for the entire time it’s decaying, Strontium-90 has a half-life of [about] 28 years so we could extract usable power out of it for the full 28 years.”

A $10,000 prize in the Burton D. Morgan entrepreneurial competition at Purdue helped them carry out their test case, getting a “tiny reaction” from a small experimental sample of Strontium 90. They hope the Clean Energy Challenge, with mentoring and the possibility of more funding, will help bring their concept a few steps closer to reality.

Auger noted that such competitions “allow us to gain funding without having to give up equity or intellectual property rights. That’s very important when you’re dealing with something so technical, that’s built around being able to own this I.P.”

An early stage company out of Ann Arbor, Michigan, called Accio Energy, is working on a way to harness wind power without a turbine for offshore wind farms. Their Aerovoltaic installations would release positively charged droplets of mist from sea water; wind moving through the apparatus would disrupt the charge in a way that would allow the harvesting of high voltage direct current. The company says their technology would cut the cost of producing wind power in half.

The Light Sentry is a project out of Naperville, Illinois that uses patented smart lighting technology to automatically create “an individual lighting experience based on the natural light available” in homes or businesses.

Other competitors in the Challenge include teams dealing with energy storage, biofuels, technology to help “smart buildings” improve energy efficiency and data analysis programs to help people find the best solar installation for their home.

Last year prizewinners included Ampy, a student project that left with $75,000; and Meter Hero, which got $25,000. Ampy captures runners’ kinetic energy to charge smart phones and other devices, and Meter Hero helps people reduce their energy use by more easily interfacing with their smart meters, as featured in Midwest Energy News.