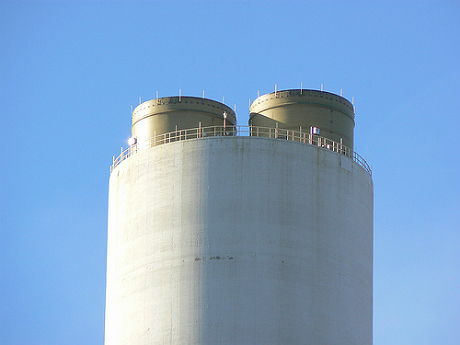 Ohio regulators have rejected the second of three utilities’ “bailout” proposals, presenting further hurdles for FirstEnergy in an upcoming hearing for its case.

On April 2 the Public Utilities Commission of Ohio (PUCO) denied Duke Energy’s request to charge all ratepayers for electricity from two older coal-fired power plants, regardless of whom the customers chose for their generation provider.

Nonetheless, regulators let the utility set up a “placeholder” rider so it could come back to seek such costs in the future.

Both an American Electric Power case decided in February and Duke’s case dealt with the utilities’ proposed plans to buy their entire shares of electricity produced by two older coal-fired power plants owned by the Ohio Valley Electric Corporation (OVEC). OVEC’s shares are owned by Duke and a dozen other companies, which include divisions or affiliates of AEP and FirstEnergy.

AEP still has a case dealing with other coal-fired power plants pending, and FirstEnergy has a case scheduled for hearing in June.

In general, Ohio law grants a monopoly to electric distribution utilities, but lets customers choose their electric generation suppliers. If approved, the Duke and AEP plans would have let the utilities buy electricity from their OVEC affiliate at a long-term contract price and pass the costs on to all distribution customers, regardless of whom they chose as their electricity provider.

Utilities have said the plans would provide long-term price stability for customers.

Consumer and environmental groups have opposed the plans as “bailouts” designed to let inefficient plants avoid competition at the expense of ratepayers. Competitors have objected to the plans as well.

In late February the PUCO ruled that it had authority to order such a plan, but that AEP did not prove its proposal would give consumers a net benefit.

Last week’s decision in Duke’s case reached a similar conclusion. The PUCO ruled that the evidence “reflects that the rider may result in a net cost to customers, with little offsetting benefit.”

The PUCO noted that there would be a net loss for the three years of the immediate plan. Looking beyond that, a Sierra Club analysis of the utility’s own data showed that consumers would still sustain a net loss for ten years.

Indeed, Duke itself argued that the plan was structured to last until 2040 in order to provide the claimed benefits. “According to Duke, any shorter termination date does not work,” the PUCO’s opinion said.

The PUCO found that the plan “would, in theory, have the effect of stabilizing or providing certainty regarding retail electric service.” Accordingly, the agency let Duke set up a “placeholder” rider for any plan that might be approved later.

At the same time, however, the PUCO noted that the plan’s impact would be “a financial limitation on customer shopping for retail electric generation service.”

Duke indicated that it is still reviewing last week’s decision to determine its impact.

“We appreciate the time and attention the commissioners put into this decision,” said Duke Energy spokesperson Lee Freedman. “We’re reviewing the order and look to have a clearer understanding of the commissioners’ opinions, the potential impact on our customers and our next steps in the coming days.”

The future of Duke’s interest in OVEC is also unclear. Last week Duke completed the sale of its non-regulated Midwest generation business to Dynegy for $2.8 billion in cash.

“The timing of Thursday’s PUCO order is in no way related to the sale of Duke Energy’s Midwest Commercial Generation business to Dynegy, which was completed on Thursday,” Freedman said.

Duke’s share in OVEC was “not included in the Dynegy transaction,” Freedman noted. “As we evaluate the PUCO’s order, we’ll determine our next steps and a strategy for our interest in OVEC.”

“We are reasonably happy with this order in that the Commission has now denied two requests to bail out coal plants in Ohio, and we’re hoping that they’ll stay the course” in future cases, said Dan Sawmiller of the Sierra Club’s Beyond Coal campaign.

However, the PUCO’s finding that it could create an exception from competition concerns Sawmiller and other critics.

“We remain concerned at the Sierra Club about the legality of this rider and the criteria the Commission have laid out, and we will be addressing those issues with the Commission,” Sawmiller noted.

Whether Duke appeals last week’s case or not, the company still has some minor involvement in FirstEnergy’s pending case.

FirstEnergy’s case deals with its share in the two Ohio Valley Electric Corporation plants, as well as the Sammis coal-fired power plant and the Davis-Besse nuclear plant. The hearing in FirstEnergy’s case is now scheduled to start on June 15 instead of this month, as had previously been planned.

The PUCO made the change to let parties “conduct additional discovery and to evaluate and offer supplemental testimony addressing the AEP Ohio Order.”

“The way the Commission has laid out its criteria, it’s highly unlikely the Commission would be persuaded that FirstEnergy’s plan is in the best interests of customers,” noted Sawmiller.

Among other things, IGS Energy wants an analysis that one of FirstEnergy’s experts had previously prepared for Duke in another matter. If the expert’s forecast in that other case was inaccurate, that would undermine his credibility.

IGS is an independent supplier of natural gas and electricity, which is also in the business of demand response and distributed generation.

Duke had been a party in the FirstEnergy case but withdrew after Oliker initially asked for the material. Now IGS is seeking it through a subpoena.

“FirstEnergy’s projection of the cost of shifting financial risk from its affiliate’s power plants to consumers is largely based on a forecast of future wholesale market prices created by witness Judah Rose,” explained Oliker. “In furtherance of transparency and to test the accuracy of Mr. Rose’s forecast, IGS requested that FirstEnergy provide Mr. Rose’s past forecasts, including a forecast that Mr. Rose produced for Duke in its 2011 ESP case.”

“Because FirstEnergy has refused to provide that forecast—it claims that Duke is the exclusive owner of that proprietary forecast—IGS had no other option than to issue a third party subpoena on Duke to obtain the information,” Oliker said.

“State policy promotes competition and FirstEnergy divested its power plants to an unregulated affiliate in support of that policy,” added Oliker. “FirstEnergy’s proposal to bail out its affiliate’s power plants on the back of consumers is fundamentally inconsistent with the promotion of open and fair competition and will ultimately deny consumers access to valuable and innovative energy-related products and services.”