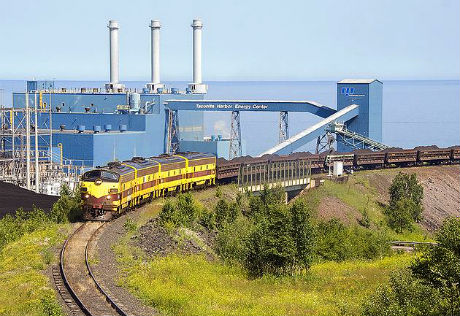 People with respiratory problems who live and play along Minnesota’s North Shore may find breathing a little easier in the future.

The Minnesota Pollution Control Agency has come to an agreement with Minnesota Power on a timeline to update a sulfur dioxide (SO2) air pollution permit for Taconite Harbor Energy Center in Schroeder.

The plant is a hard-to-miss landmark along scenic Highway 61, a popular route for summer tourists. It sprawls along Lake Superior near a town of barely 200 people and a popular resort.

The move is a result of a settlement with Fresh Energy, the Minnesota chapter of the Sierra Club and the Minnesota Center for Environmental Advocacy (all members of RE-AMP, which publishes Midwest Energy News) over emissions at the 225 megawatt coal-fired plant. The agency also received a letter in December from concerned citizens, physicians and faith and environmental groups.

The initial permit is more than a decade old and had not included a higher SO2 standard issued by the U.S. Environmental Protection Agency in 2010.

“We hope the agreement will eventually bring Taconite Harbor into compliance with existing clean air standards,” said Michelle Rosier, senior campaign and organizing manager with the Sierra Club’s Beyond Coal campaign. “We hope the result will protect people’s health and the environment while meeting the law.”

Minnesota Power already announced the closing of one of the three boilers this year, and environmental controls are operating at Taconite Harbor to remove SO2 and other pollutants. However, the technology does not appear to be working well enough for the plant to meet federal air quality standards, said Rosier.

David Thornton, MCPA assistant commissioner, said the technology at the plant “is not doing as much as folks hoped for [in removing] sulfur.” The boilers’ short emission stacks fall below the North Shore’s ridgeline, which contributes to the problem by trapping pollutants, he noted.

The MPCA’s action comes in part after a Sierra Club-sponsored report by Madison-based Wingra Engineering S.C. revealed that the SO2 emissions from the plant exceeded the “national ambient air quality standard” for a number of years.

Although the permit had not been updated, Minnesota Power is obligated to meet current standards for air pollution, Thornton said. The MPCA had planned to look at the SO2 permit but moved the timetable up significantly after the Sierra Club’s study, he added.

Under the agreement, Minnesota Power will submit modeling data on SO2 emissions by July 1. Not long after, the company will submit a resource plan to the Minnesota Public Utilities Commission that outlines future power needs and generation sources, among other details.

The fate of Taconite Harbor will be included in that document.

The Sierra Club’s modeling shows that it will be difficult to bring the current coal-fired plant up to EPA standards, she said. The report is required to have detailed analysis of the costs of upgrading old coal plants compared with building new generation facilities which would have fewer emissions, said J. Drake Hamilton, science policy director at Fresh Energy.

“What Minnesota Power has found in other plants is that it makes more sense to retire and replace those older units with cleaner sources of energy,” she said. A recent example is the utility’s decision to replace coal with natural gas at its 110 MW Laskin plant in Hoyt Lakes.

This is not the first time Minnesota Power has run afoul of EPA regulations. Owned by Duluth-based Allete, the utility agreed to a settlement last year with the EPA involving an effort to reduce pollution at several plants, including Taconite Harbor.

The EPA had charged the utility with violating the Clean Air Act by not installing the latest technology and by not obtaining required permits during an update to the plant. The settlement calls for the company to reduce SO2 and nitrogen oxide emissions at three plants, including Taconite Harbor.