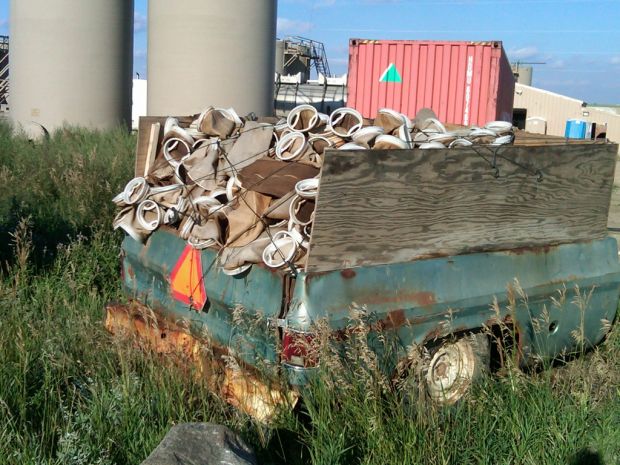 Much of the radioactive waste generated in North Dakota’s oil fields is now required by law to be transported to specialized landfills in other states, a costly chore for the oil industry.

North Dakota’s health department, however, is considering giving the industry a break by raising from 5 to 50 picocuries the radioactivity threshold above which waste must be ferried out of state.

The likely net result: a lot more radioactive waste buried in the state.

The state’s health department and oil industry contend that the waste that would fall within the 50-picocurie limit is not hazardous, and can be buried safely in specialized landfills with structures and procedures aimed at containing the higher levels of radioactivity.

That was confirmed in a study that the Argonne National Laboratory did in December for the health department. It found that dumping of waste with up to 51 picocuries per gram would likely expose people living nearby to levels of radioactivity far below what is considered safe.

The state’s radioactive refuse arrives in the form of rocks, silt and water mined from underground in the search for oil and gas. The muck is filtered through “socks” that are hauled away for disposal. It’s been estimated that the industry produces about 27 tons of the socks per day.

But it’s a fact that the earth itself is radioactive, to varying degrees. Coffee grounds can register 30 picocuries, a granite counter top 30 to 40, and phosphate fertilizers 400, said Dave Glatt, the state’s chief of environmental health.

“It didn’t make much sense to keep [the threshold] at five when in some cases the background radiation is greater than that,” he said. “We are aware of a lot of materials that are being disposed of on a daily basis that are more than five. We thought we needed a more realistic standard. That’s why we proposed moving it to 50.”

The Dakota Resource Council, a community action agency, is not confident that the new higher threshold would protect human and environmental health. Although a kitchen counter might harbor 40 picocuries, it “is not comparable to a huge dump” that could accept 25,000 tons of 50-picocurie-waste each year, said the Council’s executive director, Don Morrison.

“They’re not putting a lead vest around that dump.”

In response to the health department’s proposal, Morrison said, “You haven’t been able to handle the waste at 5 picocuries – and now you want to have 10 times as much?”

Morrison and others are dismayed by the fact that radioactive “filter socks” have been illegally dumped in a number of places in recent years. A year ago, more than 200 industrial-sized black garbage bags filled with filter socks were found piled up in an abandoned gas station in the remote town of Noonan, in northwestern North Dakota. A couple weeks before that, open trailers loaded with contaminated filter socks were found parked near Watford City, N.D.

In fact, the recent history of illegal disposal of low-level radioactive oil field waste is one reason the health department proposed hiking the limit from five to 50 picocuries.

Given the explosive growth of the oil industry until just recently, Glatt said, “There’s a lot more waste than we’ve ever experienced in the past. Existing rules didn’t adequately address the handling of it.”

Another reason the department is pursuing a higher threshold: the oil industry wants it. Transporting all of that trash to Colorado or Utah or Texas is a pricey proposition. One estimate puts the potential savings of in-state disposal at something like $120 million each year for the industry statewide.

Morrison, of the Dakota Resource Council, said the price for dealing with oil-field waste is simply “a cost of doing business. The companies knew this was the case” when they began drilling in North Dakota.

If the state’s rules do change to allow disposal of more radioactive waste in specialized landfills, he said, “Who’s going to shoulder the cost of doing business for the oil companies? The people who live near the dump.” For them, he said, “It’s tough luck, Charlie.”

Morrison claims that he’s been told by at least one banker that property near a specialized landfill would not likely qualify for a loan.

The health department’s proposal to hike the radioactivity threshold includes some parameters for the design and operation of those landfills. There are 13 such landfills now, according to the health department, and permits are in process for two more.

The proposed rules would limit radioactive dumping at the approved landfills to 25,000 tons per year. It also would require 10 feet of dirt on top of any radioactive materials when the landfill is finally closed.

The designated landfills also would have dual liners and a leachate collection system. Although most municipal landfills have a leachate collection system, only a few have double liners, according to Glatt. In addition, he said, specialized landfills are approved only in sites with geological conditions conducive to preventing toxins from migrating underground. Landfills taking radioactive waste with more than 5 picocuries also will have to monitor the radioactivity of the nearby groundwater.

It’s likely that employees at landfills accepting 50-picocurie waste will themselves be monitored, Glatt said.

“We don’t think there’s an exposure risk, but we may require them to be monitored for some time. It’s just a layer of security – and a comfort level for the employees.”

The health department has proposed changing another rule to require that all parties involved with radioactive oil-field waste keep track of it on a manifest indicating where it was produced, who it was hauled by, and where it ended up.

No landfill in North Dakota would be required to accept waste under the new rules now being considered, Glatt said. And if they wish to take it, they’d have to get a permit from the state.

The health department now is reviewing and responding to the large volume of comments it has received. After it makes a decision about a rule change, it won’t take effect until it’s been approved by the state attorney general’s office, the North Dakota State Health Council and the administrative rules committee.

Glatt said that’s unlikely to be completed before the end of this year.

The Dakota Resource Council is a member of RE-AMP, which publishes Midwest Energy News.