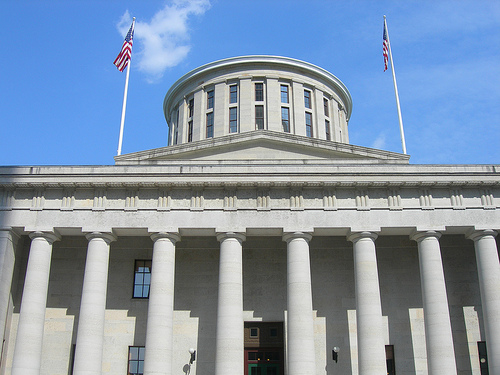 While an Ohio energy study committee is tasked by law to look broadly at both the costs and benefits of the state’s clean energy standards, advocates say most of the group’s focus so far has been on factors against them.

“The committee has stated that they are coming at this with an open mind, and I continue to give them the benefit of the doubt,” said Rob Kelter of the Environmental Law & Policy Center.

Lawmakers at that meeting focused primarily on perceived weaknesses of wind and solar energy, without considering the benefits of either renewable energy or energy efficiency.

Last spring, a majority of the twelve-member Energy Mandates Study Committee under SB 310 voted to relax requirements for Ohio’s renewable energy and energy efficiency standards and impose a two-year freeze on any increases in the standards’ benchmarks.

“The Energy Mandates Study Committee is charged with conducting a comprehensive review of Ohio’s alternative energy resources and innovative leaders in this intriguing and exponentially evolving industry. Industry representatives from solar and combined heat and power testify this week, as will many others with innovative ideas,” said committee co-chair Sen. Troy Balderson (R-Zanesville). “The goal is to define best practices that will not only fit, but help make Ohio’s energy grid efficient and affordable.”

“Our work has mainly focused on reviewing Ohio’s energy profile, as well as the effect the U.S. EPA’s proposed Clean Power Plan rule will have on the state,” said committee co-chair Rep. Kristina Roegner (R-Hudson).

“Certainly the questions from the committee have been pointed,” though, Seitz said. In his view, the issue isn’t whether clean energy is a good idea in general, “but whether there should be mandates.”

For its March 18 meeting, the committee invited Andrew Ott of grid operator PJM Interconnection to testify and answer questions.

“My written testimony highlighted the role of energy efficiency in the capacity market and the amounts that had cleared,” Ott said.

Despite that, “the committee did not ask questions regarding the role or impact of energy efficiency,” Ott said.

Likewise, lawmakers did not ask Ott about an economic analysis PJM issued early last month, showing that renewable energy and energy efficiency could save states money under the Clean Power Plan.

Kelter said lawmakers also discussed wind and solar at the meeting, but focused almost exclusively on weaknesses without any discussion of their benefits or how they can fit into a balanced energy portfolio for the state.

Lawmakers did ask what the lowest cost energy resource was, which Ott said is natural gas.

Ott should have limited that response to current market conditions for generating plants, rather than all energy resources, said Dan Sawmiller of the Sierra Club’s Beyond Coal campaign.

“Oftentimes when talking about generation resources, people overlook the overwhelming value that energy efficiency provides, simply because it does not generate electricity,” Sawmiller explained. “Efficiency has always proven to be cheaper” than gas or other forms of electricity generation.

“We know that energy efficiency is the cheapest way to meet customers’ energy needs, and it does have a high reliability factor,” agreed Kelter.

“In general, demand response and energy efficiency resources compete with generation resources in the capacity auctions to satisfy the capacity procurement requirements of the region,” Ott said.

“To the extent demand response or energy efficiency resources clear in the auction, they will tend to lower capacity prices because they displace more expensive resources,” Ott added.

In order to count for PJM’s auctions, however, energy efficiency projects must meet the grid operator’s rules. The Ohio study committee has not yet discussed whether fewer resources would qualify as a result of SB 310. Nor has PJM done that work for the committee.

“PJM has not evaluated the changes in Ohio SB 310,” Ott said.

Critics say the committee also missed opportunities to ask about the potential benefits of energy efficiency at the committee’s first meetings with witnesses from the Ohio EPA and the PUCO.

Utility reports filed with the PUCO have reported that programs under the state’s energy efficiency standard save roughly $2 for each dollar spent.

“The numbers are what the numbers are,” said Martin Kushler of the American Council for an Energy-Efficient Economy. “Nobody’s ever countered that information.”

Beyond this, advocates note that energy efficiency has health and environmental benefits, because there’s less need to run power plants that emit pollution.

But, added Kushler, “support for energy efficiency doesn’t have to rely on those [benefits]. It’s totally solid on the economics.”

Ott’s prepared testimony noted how wind and solar energy are discounted for purposes of PJM’s annual capacity auctions because those sources are intermittent.

Most of the time lawmakers spent asking questions focused on those discounts and ignored the primary value of renewable energy, say advocates.

“Wind is not necessarily a capacity resource,” said Dan Sawmiller of the Sierra Club’s Beyond Coal program. “It’s an energy resource.”

The capacity auction aims “to make sure that when there’s a peak period of demand, there is either enough generation or enough demand response or other energy efficiency resources to be able to make sure that the grid is in balance,” said Eric Thumma at Iberdrola Renewables, whose projects include the 304 MW Blue Creek Wind Farm in northwest Ohio.

“That’s a different product from energy, which is just the megawatt hours that are delivered to the grid from resources,” Thumma continued. “That’s really the product that wind and solar provide. They’re energy resources.”

“Capacity factors by themselves are not that critical,” Sawmiller said. “Consumers are more concerned with the total cost of producing the reliable electricity that they demand, not the capacity factor of a particular resource.”

As a general rule of thumb, capacity makes up roughly one-sixth of the generation portion of customers’ electric bills in Ohio, and charges for electricity make up the remainder.

“While wind may sometimes be unavailable during the system peak, it does not mean that wind is not a valuable resource that provides significant benefit throughout the year,” Sawmiller said.

Every type of generation has strengths and weaknesses, Thumma noted. For example, nuclear power plants can provide baseload power, but can’t readily follow fluctuations in demand.

Natural gas plants can ramp output up or down, “but you have fuel price volatility with gas,” Thumma said. “During the polar vortex last year when prices skyrocketed, there were billions of dollars of costs to consumers that weren’t expected. If you didn’t like gas, you would just hammer on that.”

Wind and solar energy don’t have fuel costs, Thumma noted. Nor do they produce air emissions.

“What we’re providing is a very low-cost wholesale price, and we’re also providing environmental and sustainability benefits to the grid,” Thumma said. “Our view is that you need to have all the resources integrated and working together.”

Last year PJM reported that the regional grid could reliably handle up to 30 percent of the region’s electricity from wind or other renewable resources.

None of the lawmakers asked Ott about that or other benefits of renewable energy.

Ott stressed that PJM does not decide ultimate policy issues on clean energy. Rather, those issues are “determined by local, state and federal policy makers, not by the markets.” he said.

“The issue is not whether you’re for or against having the wind blow or the sun shine or the possibilities of using that as a power source,” Seitz said. “The issue rather is should utilities be mandated to buy that fuel, and should ratepayers be mandated to pay for it? Or should ratepayers have some choice in the matter? That’s really the issue. It’s been the issue all along.”

“That’s the issue to me and to many others on this committee,” Seitz said. “And that issue has been compounded by the looming omnipresence of this ridiculous U.S. EPA Clean Power Plan.”

The Clean Power Plan “threatens to impose new mandates on top of whatever state mandates there are,” Seitz said. “Why should we continue marching up State Mandate Mountain when there are new federal mandates on the horizon?”

Energy efficiency standards in Ohio and elsewhere “are totally cost-effective and save ratepayers hundreds of millions of dollars,” stressed Kushler.

“Even if EPA disappeared tomorrow, it would still be in the best interests of Ohio to do energy efficiency programs,” Kushler continued. “Energy efficiency is still cheaper than supplying and operating those generating plants and paying for their replacements” when they eventually get too old.

Thumma said he would urge lawmakers to rescind or reconsider Ohio House Bill 483, which tripled property line setbacks for turbines on commercial wind farms. As a practical matter, the law rules out any new commercial wind farms that don’t already have permits, he said.

No public hearings were held on that last-minute change before the bill passed last year. In the less than ten minutes of debate on it, Seitz railed against noise and other aspects of wind energy.

“We’d like to see legislation that is obviously protective of the areas in which we’re developing, but also allows us to economically develop wind farms,” Thumma said.

“What I always ask people to do is come have a conversation with me,” Thumma added. “We’ll stand under an operating wind turbine, and we can talk at the same level that we’re talking right now.”

Scheduled witnesses for the next committee meeting on April 16 are Joseph Bowring of Monitoring Analytics, Sean Gallagher of the Solar Energy Industries Association, and Stephen Bennett of the Retail Energy Supply Association.

A panel on combined heat and power (CHP) is also planned with Greg Collins of Energy Systems Group, Steve Giles of Hull & Associaties, Balachandar Naidu of GE, and Patrick Smith of IGS.

Prepared testimony is not yet available. “Generally though, we are hoping to get more information about solar, wind, and CHP from Mr. Gallagher, Dr. Bowring, and the CHP panel, respectively,” said legislative aide Sarah Huffman at the office of Sen. Balderson.

“In addition, Dr. Bowring will be touching on some PJM aspects, as Monitoring Analytics is the independent market monitor of PJM. Mr. Bennett from RESA will be talking about the retail side and consumer choice in energy supply,” Huffman said.

Last September, though, Bowring suggested that PJM exclude demand-side resources from its annual capacity auctions, so power plants will have more “incentive to run,” according to SNL Financial.

Those resources could include both demand response and energy efficiency. Presumably the “incentive” would be higher capacity payments to power plants, including some for plants that otherwise might not clear the auction at all.

PJM has not adopted Bowring’s suggestion.

Moreover, energy efficiency and demand response differ in important respects, say advocates. In general, demand response represents a commitment from customers to reduce usage when needed so resources can be available to others, as opposed to permanently reducing demand through efficiency.

Utilities whose affiliates own inefficient power plants may not like the results, he added, but that’s how the market should work. In his view, less efficient plants should not get incentives.

“It’s simple supply and demand,” Kushler explained. “If you reduce demand, it’s going to reduce the market price. That was one of the objectives for energy efficiency in the first place. That’s how you save money for the electric system as a whole, and it’s working.”

The Environmental Law & Policy Center, American Council for an Energy-Efficient Economy and Sierra Club are members of RE-AMP, which publishes Midwest Energy News.