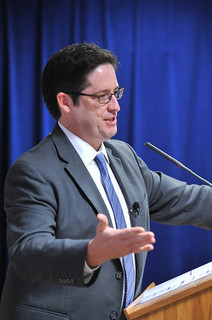 Despite a promise by congressional Republicans to kill federal carbon regulations being finalized this summer, the author of a new report says that most states have begun planning to comply with them.

Even as some legislators and regulators work to kill the U.S. Environmental Protection Agency’s Clean Power Plan, most state governments have quietly started meeting with stakeholders and asked for input from bordering states, according to Franz Litz, a program consultant for the Great Plains Institute and co-author of a new report that offers a series of policy approaches for states.

“By our estimate, 41 of the 50 states are looking at multi-state collaboration while they also consider implementing as single states,” Litz said.

The Clean Power Plan offers each state carbon reduction targets but largely leaves the details of how to achieve those goals to local utilities and regulators. Written with Jennifer Macedonia, a senior advisor for the Bipartisan Policy Center, the report details how states can form what the EPA calls 111(d) plans — essentially the document that will guide them toward meeting EPA goals.

Called “Choosing a Policy Pathway for State 111(d) Plans to Meet State Objectives,” the 36-page report’s title reflects the deep-in-the-weeds thinking behind scenarios and explanations the authors provide. The subject of federal energy policy is fairly dense but Litz and Macadonia make it digestible.

Litz spoke to Midwest Energy News about the report and the different paths states can take to meet the carbon reduction goals the EPA has established for them.

Midwest Energy News: What role do states have in the Clean Power Plan?

Litz: The EPA has given states a lot of flexibility in developing carbon reduction plans, but that cuts both ways. You have flexibility but states are starting with a blank page, and that can be daunting. We wrote the paper with the idea that states are starting with that blank page and they could use a framework for tackling the decisions ahead of them.

How about states with governors and legislatures that have called for killing the Clean Power Plan?

For the most part, even those states are being pragmatic about it. They don’t have the luxury of saying no because that would mean the EPA would be stepping in and doing the regulation for them. And that’s not a great solution for them or their stakeholders.

Even states that are not supportive of the rule are thinking of how to best implement it. There’s a lot of complexity to this thing and if the Clean Power Plan does not go away, a state that doesn’t plan could find itself behind the eight ball.

You address two main strategies states can adopt to meet the Clean Power Plan goals — “mass-based” and “rate-based.” Can you first explain mass-based?

What are the advantages of that approach?

Mass-based plans are simpler and the emissions are easily tradable, which allows a utility that has met their goal to sell some of their excess tons to other utilities. It’s a variation on an approach that has been used in the past to meet emission reduction goals.

What are the disadvantages to a mass-based pathway?

There is concern that a mass-based approach can restrict growth along with emissions to the extent a state or a region must rely on fossil-fueled generation. This concern may be a bit overstated because EPA allows states to take growth into account through 2030 when setting the overall emissions limit. New sources of energy are not automatically included, either, although we think states will probably opt to cover new plants.

How does the rate-based approach work?

The state goal is expressed as a number of pounds of CO2 per megawatt hour of generation from covered plants. A rate-based approach requires a mechanism to adjust for efficiency, renewables and other creditable activities.

What are disadvantages to rate-based policies?

A lot of states have state goals that can’t be met by just running the power plants. They will need to get credits from renewable energy and efficiency, which means states have to build the capacity to evaluate and issue credits—no small undertaking. The process of issuing credits is also likely to be controversial and conflicting adversarial interests in the process could gum up the works.

We want states to understand the implications of all of their options. But there is no denying that a mass-based approach is much simpler. Anything done to reduce emissions shows up in results. There’s no need for a crediting mechanism for renewables and efficiency and no need to build a new part of the state bureaucracy to handle credits.

The report speaks a lot about multi-state roadmaps. Is that the way to go?

There have been analyses from regional transmission organizations such as PJM and MISO, as well as from EPA, that tend to suggest it is the way to go. Everyone agrees a multi-state approach will reduce costs and increase reliability on the system. With the mass-based system it could work well so long as individual states put up programs that are simple and have integrity.

With a rated-based approach it would be harder because the trading of credits of different types introduces the potential for disagreement among states that could be avoided but it would require a lot coordination up front.

What if a region chooses a mass-based plan?

In the paper we look at the minimum requirements a state would have to meet to set themselves up to allow their power plants to take allowances or credits from another state. That enhances flexibility without requiring a whole lot of coordination among states or even a formal agreement among states. Allowing power plant owners the flexibility to seek lower-cost reductions in another state is an attractive option.

Are Midwest states speaking to one another about meeting the Clean Power Plan?

The Great Plains Institute helps to staff the Midcontinent States Environmental and Energy Regulators (MSEER) group which brings together state officials from 14 states, including all the states in the MISO footprint except Texas. That group is looking at all of the options, including whether a multistate approach might serve their individual interests better than a single-state approach.

The Great Plains Institute is a member of RE-AMP, which publishes Midwest Energy News.