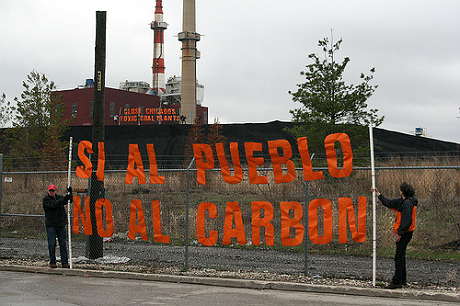 Low-income residents’ health and pocketbooks are disproportionately affected by burning fossil fuels, and they stand to benefit the most as states comply with federal carbon regulations, according to two new reports released last week.

Those findings run counter to coal industry campaigns suggesting the opposite — that low-income residents are facing rate increases as states and utilities comply with the Clean Power Plan, according to the Natural Resources Defense Council.

“Clean energy really benefits everyone — this is a pocketbook and a public health issue for these people,” said Katharine McCormick, NRDC’s Midwest advocate and author of the group’s latest report “Bridging the Clean Energy Divide.”

The NRDC is a member of RE-AMP, which publishes Midwest Energy News.

The NRDC presented its report in Lansing last week at a panel discussion sponsored by the Michigan League for Public Policy, a nonpartisan policy group for economic equality that also released a similar Michigan-focused report.

The MLPP says that five of the country’s “most offensive” coal plants are located in Michigan, and asthma rates worsen particularly in the southeast corner of the state.

Meanwhile, low-income families spend 8.3 percent of their income on electricity bills compared to 2.9 percent of the average U.S. household, according to the NRDC.

“Low-income families and those of color are disproportionately affected by pollution costs and pollutants from coal-burning power plants. Energy efficiency and renewable energy bring lots of benefits to people — pollution is reduced and bills are smaller and more predictable,” she said. “We see how important it is to connect the dots.”

The reports point out clean-energy and efficiency benefits for public health, employment and electric costs among low-income populations, set in the context of a transitioning energy mix as states comply with federal carbon regulations.

“By transitioning from coal to more local and renewable resources, three-quarters of our states will spend less money on shipping in fuels from outside, and our electricity system will be made more affordable, more reliable, and cleaner,” according to the NRDC report.

The transition may be expedited in Michigan, where 10 coal plants are scheduled to be retired in the coming years to comply with emission regulations. That is leading to a projected capacity shortfall and the perception among the Republican-dominated Legislature and major utilities that it will be made up with new natural-gas generation.

“We’re arguing that you don’t need to build those plants,” McCormick said, adding that the volatility of natural gas prices adds to the uncertainty of new natural gas plants’ viability.

And while Clean Power Plan opponents allege higher electricity rates are coming, the NRDC report points out that ratepayers pay electric bills, differentiating between the two:

“The amount [customers] pay depends on two factors: how much each kilowatt-hour costs, and how many kilowatt-hours they use. Energy efficiency … can cut the number of kilowatt-hours used, driving bills down overall. Power companies and their regulators have the opportunity — and the responsibility — to make this happen. If we adopt smart policies that reach everyone and optimize our energy use, overall customer electricity bills can decrease even if the price per kilowatt-hour goes up.”

The MLPP also points out that states can be credited for energy efficiency improvements across all sectors of the economy, which could decrease electricity bills by 8 percent, or about $100 annually for the average customer.

The NRDC report says 68 percent of African-Americans live within 30 miles of a coal-fired power plant, compared to 56 percent of whites.

These issues are particularly evident in southeast Michigan.

“Clean energy is an environmental, economic and climate justice issue,” Kimberly Hill Knott, director of policy for Detroiters Working for Environmental Justice, said during last week’s panel. “And you can’t talk about energy efficiency without talking about those three things. Often, African-Americans are underrepresented in the green economy and are most impacted by the dirty-industry economy.”

Jacobs noted that DTE Energy’s River Rouge coal plant in Wayne County contributes to one of the most polluted areas in the country. Detroit zip codes are three to six time more likely to have asthma-related hospital admissions than the state as a whole, according to the MLPP, and Wayne County has more poor residents than any other county in Michigan.

“People of color make up 65 percent of that community, it is the epicenter of the asthma burden,” Jacobs said of River Rouge. “That is not something we ought to be proud of, it’s something we really need to deal with.”

The groups’ reports argue that the generation-side solution to these issues is in renewables. These zero-fuel-cost sources have saved states money, including Illinois, which saved $176.85 million in 2011 from integrating renewable resources, according to the NRDC.

“A report by PJM Interconnection LLC, the largest grid operator in the nation, found that generating 30 percent of the electricity in its region with renewable energy — which would reduce harmful pollution without compromising reliability — would save consumers up to 30 percent, even after factoring in the cost of additional transmission lines,” the NRDC report says.

Perhaps the most direct benefit to low-income residents comes in the form of energy efficiency programs.

Such initiatives have been a priority of Gov. Rick Snyder’s administration for the past several years, said Paul Smith, Snyder’s deputy legal counsel who spoke at last week’s event. He noted that 1.2 million Michigan households qualify for some form of home-heating assistance — one-third of those are elderly and 20 percent include families with children under 5 years old.

He said the Michigan Energy Assistance Program, created in 20112, is designed to promote self-sufficiency instead of helping pay off debt after a shut-off has occurred.

“Promoting energy efficiency and low-income assistance programs is good for the environment” and affordability, Smith said, describing two key pillars to Snyder’s energy goals he unveiled last March. The governor said Michigan can reduce energy consumption by 15 percent in the next 10 years.

“Let’s put the money up, make the change and start saving money on energy bills and that will pay for itself,” he said. “We as conservatives are saying: Let’s do what makes sense for businesses, property owners and taxpayers. We’re all in on energy efficiency.”