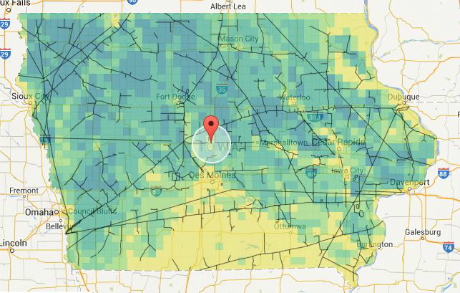 Iowa, already one of the nation’s two leading producers of both corn ethanol and biodiesel, may be about to plunge into the production of renewable fuels made from animal manure, municipal waste and other organic byproducts of farming and manufacturing.

The shift is in part because of an obscure change made last summer in the federal Renewable Fuels Standard (RFS), which has enhanced the value of biogas in the fuel marketplace.

The change added biogas to the list of advanced cellulosic biofuels that refiners are required to either produce or purchase credits for. Between now and 2022, the fuel standard is projected to require at least a fourfold increase in the amount of cellulosic fuels that must be blended with gasoline. As a result, renewable fuels are fetching a higher price.

Amanda Bilek, government affairs manager for the Great Plains Institute in Minneapolis, estimates the “price premium” now enjoyed by this group of renewable fuels at between 40 and 60 cents per gallon, which she said should defray some of added expense of making natural gas from organic waste.

The change to the RFS “has really opened up the market” for fuels made from manure and other organic wastes, she said.

Although the technique for making fuel from organic waste has been around for quite some time, the economics haven’t been sufficiently attractive – until recently. Few states are better positioned than Iowa to exploit the changing policy and economic reality. The National Renewable Energy Laboratory in 2013 published an inventory of methane-containing waste streams in each state.

Iowa was ranked as producing more animal manure than any other state. Coming in close behind was South Dakota.

When the study assessed the potential more broadly – tallying up the amount of methane contained in not just manure, but also wastewater, landfills and industrial and commercial organic waste, Iowa rated 8th overall. Illinois and Ohio ranked fourth and fifth, respectively.

Together with Iowa State University, Des Moines-based EcoEngineers last year developed an interactive map of the state’s abundant supply of organic wastes. Type in a location and it’ll calculate the amount of methane-containing waste within a 10- or 50-mile radius.

Now, one of the firm’s founding partners is visiting every one of Iowa’s 99 counties in a search for collaborators to convert the state’s prodigious organic waste matter into renewable fuel and, possibly, electricity and heat.

“We are really talking about creating a new renewable fuel industry in Iowa,” said Shashi Menon of EcoEngineers. “Iowa leads the nation in ethanol and biodiesel. They’ve made a strong path before us. We will be following in their footsteps and creating more value in the agricultural economy.

When cleansed of its non-methane components, renewable natural gas is chemically identical to – and interchangeable with – the natural gas from fossil sources that heats water and interior spaces, and that powers a few vehicles.

Menon said that biogas production so far has been modest, and has been limited to a few wastewater plants and a couple of farm biodigesters.

However, the company already is at work developing a biogas plant in Kansas. Menon said his company is negotiating the final details with a meatpacking plant that will provide the organic waste. He expects the deal to be finalized within a month or two.

He estimates that each day it will produce enough renewable natural gas to fill two train cars.

“We have a partner who will use this fuel in their trucking fleets. We are also negotiating with other entities that may use to it to offset their space heating needs and their carbon footprint. Both are quite attractive. Or power generation. We may allocate a portion for that.”

Nationwide, according to the U.S. Energy Information Administration (EIA), 420 billion cubic feet of methane is generated each year in various forms of organic waste. Were all of that to be processed into fuel, the EIA estimates it could displace about 5 percent of current natural gas consumption in the electric power sector and 56 percent of natural gas consumption in the transportation sector.

Waste is converted into useable biogas by anaerobic bacteria that operate in the absence of oxygen. After anaerobic digestion, the gas typically contains 50 to 75 percent methane. What remains is mostly carbon dioxide, with a small amount of water and traces of a couple other gases.

The biogas can be further processed to increase the methane concentration to 95 percent or more. At that point, it is considered equivalent to natural gas from fossil sources, and it can be used just as the more conventional natural gas is – to heat spaces or water, to power vehicles that are adapted to burn compressed natural gas. It also can be put into the pipelines that carry methane from fossil sources.

Plenty of people could get in on a burgeoning biogas industry, according to Mark Wright, an assistant professor of mechanical engineering at Iowa State University who has collaborated with EcoEngineers.

“There are farmers looking for additional revenue streams,” he said. “There are municipalities that are interested in reducing the material that goes into their solid waste stream. The water runoff from some of these ends up in the sewer system.

“For the general public living in an area with these feedlots, biogas could be a way to reduce the smell coming from these facilities. State officials who want to incentivize rural development think it could bring jobs.”

Menon has generated some interest in the course of his renewable-fuels tour across Iowa. His team is studying the feasibility of developing projects in at least a half-dozen communities where people have embraced his vision.

As he continues with his travels, he said, “that [number] keeps growing.”

The Great Plains Institute is a member of RE-AMP, which publishes Midwest Energy News.