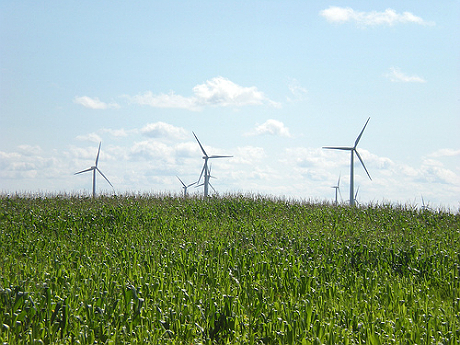 The “Powering Michigan’s Future” bill package, announced by a bicameral group of Democratic lawmakers in Lansing, heads to committee in both Republican-controlled chambers where it faces an uncertain future.

Michigan Republicans are looking to abandon the renewable energy standard (PA 295) that passed with bipartisan support in 2008.

When the 10 percent renewable energy standard levels off at the end of the year, both Republican chairs of energy committees want to move to an Integrated Resource Plan process, saying that could drive utilities to pursue renewable and efficiency efforts if it makes sense financially and to comply with federal emission regulations.

Clean-energy advocates have said the IRP process isn’t an effective substitute for standards, which they say provide a clearer market signal to utilities and developers.

Republican state Sen. Mike Nofs’ plan goes even further than an IRP by establishing a “clean energy standard” that would credit utilities for decreasing a variety of air pollutants. Nofs said earlier this week that he plans to introduce his legislation in the next couple of weeks.

While he voted in favor of the 10 percent renewable standard, Nofs has said it provided the industry with the jump-start it needed but that renewable development should be able to stand up on its own now.

Republican Gov. Rick Snyder has outlined his own set of energy policy goals, including a diverse mix of resources, but he has not specifically called on renewing or eliminating the mandates. Depending on the price trajectory of natural gas, Snyder’s approach could see the percentage of renewables increase to 15 or 25 percent by 2025.

Environmental and public-health groups applauded the Democrats’ announcement Thursday, with support coming from groups like the Sierra Club, the Natural Resources Defense Council and the Michigan chapter of the Asthma & Allergy Foundation of America.

Supporters point to the success of PA 295 in helping drive down the cost of renewables and generating nearly $3 billion in investment.

They would also double the energy efficiency standard to 2 percent of a utility’s total annual retail electricity sales by 2019 and beyond, and eliminate the renewable energy surcharge on ratepayer bills.

“Michigan’s clean energy industry has been a true success story and I’m proud to announce the Powering Michigan’s Future legislative package to build upon this success — creating jobs, sparking investment and launching new businesses in our state,” state Sen. Hoon-Yung Hopgood, Democratic vice chairman of the Senate Energy and Technology Committee, said in a statement. “Expanding our use of renewable energy and energy efficiency will build upon our manufacturing strength, talent and know-how.”

State Rep. Bill LaVoy, the Democratic vice chairman of the House Energy Policy Committee, said the plan is meant to reduce energy costs through efficiency and keep rates from climbing.

“Thanks to advances in technology, the cost of renewable energy has declined dramatically over the past five years and families and businesses are saving money by reducing energy waste,” LaVoy said in a statement. “Michigan has the highest energy costs in the region and it’s critical that we manage these costs to grow our economy and create jobs.”

‘Michigan could go even further’

The Union of Concerned Scientists — which is concerned about a major shift from coal to natural gas instead of renewables — also backed the Democrats’ plan, but said it could go even further.

“However, analysis by the Michigan Public Service Commission and UCS shows the state can cost-effectively supply 30 percent or more of its electricity from renewable energy resources. Twenty percent renewable energy by 2022 is certainly a move in the right direction, but Michigan could go even further and would reap significant economic, environmental and public health benefits in the process.”

James Clift, policy director for the Lansing-based Michigan Environmental Council, called the Democrats’ plan a “good next step for Michigan.” He is concerned about the “economic development message” that eliminating the renewable standard would send.

“For the companies that have already invested in Michigan and the renewable-energy field, what message are we sending to them? I worry that if we don’t do anything on renewables, we’re going to see bankruptcies and job losses,” Clift said. “And there are companies all across the country who will only locate facilities in places they think are dealing with issues with clean energy.

“I’m afraid we will be viewed by those companies as a state taking a step backwards and won’t consider Michigan a new place to locate.”

Clift said that in the context of Republican lawmakers looking to abandon mandates — and with a variety of energy-related policy proposals out there — he hopes portions of each can be baked together.

“I’m hoping the legislature picks those provisions that they think are in the best interest of the residents and ratepayers in Michigan cobble those in a package we can get broad, bipartisan support for,” he said. “I hope at the end of the day that’s possible.”