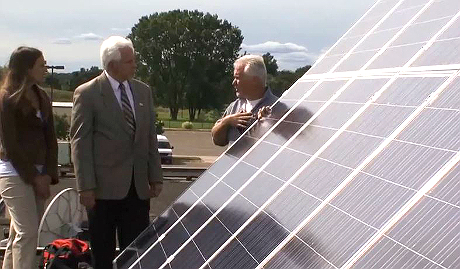 For cities like Southgate, Michigan, funding energy improvements can be a challenge. (YouTube capture via Southeast Michigan Regional Energy Office)

Over the past decade, Michigan communities have been hit with a one-two financial punch. One from declining property values and the subsequent loss of tax revenue, the other from steady declines in statutorily shared revenue from the state.

So it hasn’t exactly been easy for municipalities to pursue meaningful energy efficiency upgrades intended to save taxpayer money in the long run.

“When it comes to political willingness to do energy efficiency projects, that is a very low bar. Most communities want to make their buildings and their systems more energy efficient and when you talk to them about it, you don’t come across people who say we want to waste more energy,” said Conan Smith, executive director of the Michigan Suburbs Alliance, which helps facilitate projects through the Southeast Michigan Regional Energy Office. Smith is also a county commissioner in southeast Michigan who represents Ann Arbor.

“Where the challenge arises is the financing structure. The way municipal financing structures work, it’s not likely they’re going to have a lot of excess revenue in the next decade. The question becomes: How do you get money to capitalize on these kinds of projects?”

The Suburbs Alliance acts as a fiduciary for the Southeast Michigan Regional Energy Office and oversees efficiency and renewable-energy projects for interested municipalities.

Since 2010, the organization helped manage several projects in southeast Michigan, including an ice arena in Hazel Park that recycled heat from a compressor room to melt snow collected by the rink’s Zamboni — a job previously done by a separate hot-water heater. The roughly $10,000 project was paid for by a grant through the SMREO.

Perhaps even more ambitiously, the group is organizing communities around adopting a regional renewable portfolio standard (RPS) for municipal energy users. The SMREO represents communities that make up about one million residents — nearly 10 percent of the state’s population.

“We don’t have a really strong RPS at the state level,” Smith said. “We thought, let’s tackle that at a regional scale. … If we can get those governments pushing for it, we think we can start to affect the market for renewables.”

John Kinch, executive director of Michigan Energy Options, said many municipalities — as a result of tanking property tax and state-shared revenue — are stuck in a “break-fix mode. You don’t replace something until it breaks.” Also, already stretched infrastructure funding is typically spent on roads, water and sewage treatment.

“That’s the context,” Kinch said. “Leaders in municipalities say we’d love to make long-term efficiency improvements in buildings, but … We’re at the point where we recognize the need and we want to do it, but we don’t have the money to do it.”

Kinch’s organization helps municipalities develop long-term strategic planning goals that identify projects that are worth spending scarce resources on. These often include projects with short-term paybacks, like switching to LED lighting, or “absolutely necessary” projects that are larger scale, like upgrading energy-intensive wastewater treatment plants.

While municipalities have some tools to pay for these things — like bonding, or borrowing money with a debt-service rate — Smith said that is only fiscally effective when projects are over $2 million.

“For a small community to find a $2 million project or greater is tough. You sort of cut out some of these financing options,” he said.

But Smith’s group is also looking at aggregating multiple projects in cities to leverage a single bond offering.

“If you partner with seven other communities, all of a sudden we’re talking about a couple million dollars and bonding becomes feasible,” Smith said.

Public entities are largely shut out from using PACE financing to pay for projects, which only apply to tax-paying properties (though there have been some exceptions to this rule if the entity is a renter).

But there are options out there. Michigan Saves, an organization with seed funding from the state, helps public-sector entities identify efficiency projects and encourages them to apply for a financing program.

Smith said a lot of focus is on obtaining state or federal grants to pay for projects, and utilities offer some energy optimization rebates under Michigan’s energy law of 2008.

So far, Smith said the response from the region’s main utility, DTE Energy, has been “very favorable.”

Despite a recent dispute between the utility and local units of government over plans to charge more for running higher-efficiency lights, Smith said DTE has helped provide energy optimization money to get projects off the ground.

“We are in a bit of a dispute with them over the rate structure for LED lighting, but that’s sort of a blip on the radar,” he said. “They want to charge us more, we want to pay less, but at the end of the day we’re still going to do the upgrade.”

Several years ago at the beginning stages of the American Reinvestment and Recovery Act, Smith said his organization pulled together a list of shovel-ready efficiency projects — including lighting and HVAC upgrades and better insulating buildings — totaling in the hundreds of millions of dollars.

“It was a tremendous list of projects to finance. While a whole lot of investment has been made in the past five to seven years, we haven’t gotten all of those projects done, by a long shot,” Smith said. “I’d be surprised if it was 30 to 40 percent. There is still a lot of opportunity.”

The $35 million streetlight project is a good example of that: It will save hundreds of millions of dollars over the lifecycle of the lights, he said, and see a payback within three to five years.

Meridian Township, a community five miles east of Lansing with a population of 40,000, has focused on energy projects over the past eight years, but is “still very much a work in progress,” said LeRoy Harvey, the township’s recycling and energy coordinator.

For example, the township has followed Ann Arbor by setting up an energy fund that captures a portion of energy savings, generating tens of thousands of dollars over the years to reinvest in efficiency projects, Harvey said. Eighty percent of a project’s savings goes to the energy fund, while the remaining 20 percent is returned to the township’s general fund.

Much of the focus so far has been on lighting upgrades and controls, insulation and HVAC systems, Harvey said. The township has saved about $20,000 a year for the past three years.

While the energy fund can supplement projects and the township’s utility has provided several thousand dollars in efficiency rebates, funding is still a challenge, Harvey said.

Still, there is “definitely” more low-hanging fruit to be found, Harvey said, which Meridian Township hopes to identify when it starts its next round of evaluating efficiency options available.

“Municipalities will say they have a lot more work to do,” Kinch, of MEO, said. “I define low-hanging fruit as projects with relatively low upfront costs and quick paybacks. I think a lot of municipalities have at least taken steps.”

While municipal efficiency projects are technically the same as residential, commercial or industrial projects, Smith believes they are unique by signaling to its residents that the work is a good investment.

“There is a creation of a culture and ethos when a public institution gets involved with that kind of work,” he said. “I think that is the biggest and probably the most meaningful difference.”

Additionally, a good return on investment for municipal projects doesn’t just benefit a few people, but is rather a good use of public tax dollars.

“We all know tax dollars are hard to come by,” he said. “When taking a dollar and spending it on inefficient technology, that is a dollar that is not going into some other program, whether it’s economic development or a tax cut. There is a stronger rationale in the public sector to ensure those dollars are used to maximize efficiency.”

Smith said his organization is now partnering with areas near Traverse City and the Upper Peninsula to replicate the southeast Michigan model.

“When cities get together and collaborate, they create political will and the fiscal capacity to do this work,” he said. “More and more regions ought to be looking at it.”