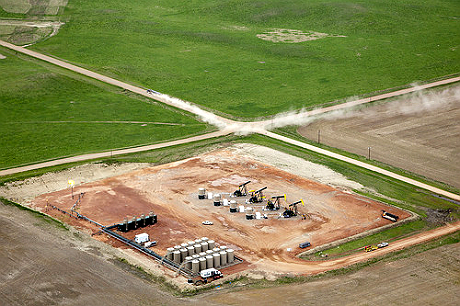 A new study says drilling activity, like this well pad in North Dakota, has claimed millions of acres across the U.S. and Canada. (Photo by Chris Boyer, Kestrel Aerial Services / NPCA via Creative Commons)

Drilling for oil and gas, which has increased substantially in many parts of the country over the past decade, has impacted millions of acres of agricultural and range land, according to researchers.

A study published today in the journal Science found that between 2000 and 2012, about 7 million acres – the rough equivalent of three Yellowstone National Parks – was given over to well pads and related roads. About half of the acreage was rangeland, and roughly another 40 percent was cropland and 10 percent forestland. A very small amount was wetland.

The researchers calculated that crop production lost due to drilling amounted to 130 million bushels of wheat, about 6 percent of the wheat produced in 2013 in the region under study.

In addition, land clearance for drilling over that period destroyed about 7 million animal unit months (an animal unit month is the forage required for one animal for one month.) The range land taken out of production over that decade is nearly equivalent to all range land managed by the federal Bureau of Land Management, according to the study.

The study, conducted by a team of researchers from several Midwestern and western universities, assessed effects in 11 states — including Kansas, Nebraska and the Dakotas — along with three Canadian provinces.

The team studied Landsat images to determine the number of new well sites, and calculated lost vegetation by using the MODIS (Moderate Resolution Imaging Spectroradiometer) earth-observing system. The orbiting satellite takes images of the earth’s surface every day, which allowed the researchers to closely follow reductions in vegetation resulting from the drilling of new holes for oil and gas development.

Development of a new oil or gas well might on average destroy vegetation on about 10 acres.

“Any single one is not that big, compared to the open-pit coal mining that we have in Montana and Wyoming,” said Steve Running, one of the study’s authors and a Regents Professor of Forest Ecology at the University of Montana. What gives it impact is the growth of the oil and gas industry, he said, and the drilling of 50,000 new holes a year.

“The point we’re trying to make with this paper is not so much that some huge fraction of current land area has been de-vegetated, as much as the trajectory of drilling, (consuming) a half-million acres per year. If we continue that to 2050, you get to some seriously big amounts of land.

“This is more about the accumulating effect through time of this pace of drilling if there is no active reclamation done on well areas after they have been depleted.”

It’s not clear to what extent abandoned drilling sites are being reclaimed, said Samuel D. Fuhlendorf, one of the researchers and the Groendyke Chair in Wildlife Conservation at Oklahoma State University.

Serving primarily as parking and staging areas for trucks delivering supplies, the sites typically are packed dirt or covered with gravel or concrete. And although use of the entire plot doesn’t typically last for long, he said, the damage does.

“There are people working on trying to restore these landscapes,” Fuhlendorf said. “An important future question is, ‘How well are they restored, and how long does it take?’ I’ve worked on the restoration of old cropland and other disturbances ….It can be pretty fast in highly-productive areas where you use the right techniques.”

But in the dry climate characteristic of much of the western U.S. and the Great Plains, he said, “It’s not a given that you just plant seeds and it goes back to what it was.”

Conditions conducive to seed germination come along only occasionally where rain is a rarity, he said, meaning that restoration can be a very long-term project. And the payoff may not be enough to make a financially compelling case for restoration.

Another unanswered question is what position state and federal governments take with regard to restoration of well pads.

“You’d expect there would be both state- and federal-level policy,” Running said. “But we’re not aware of a clear policy on this. We don’t see any active discussion or regulatory planning of how that’s going to be done, who will do it and when it will be done. Beyond policy, is there actual enforcement. We are not aware that any state or federal policies are actively following this.”

Although drilling activity has slowed recently in light of falling oil prices, Fuhlendorf said that the longer trend has been towards robust growth in drilling. In the likely event that it resumes, he said, “The point is to wake everybody up before we have a moonscape.”