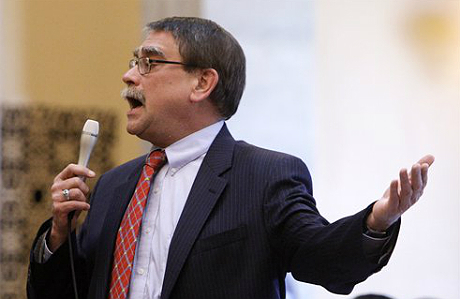 An effort by opponents to stop a proposed Ohio wind farm, which includes a legally questionable maneuver to prevent property owners from granting variances, has the support of the state legislature’s most outspoken critic of renewable energy.

Greenwich Windpark, one of the few wind energy projects moving forward in Ohio, was approved by the state Power Siting Board in August. However, opponents, along with state Sen. William Seitz, have requested a rehearing and want to apply stricter rules than those that were in effect when the Siting Board ruled last summer.

The 60-page packet, consisting of a memorandum and numerous newspaper clippings, was also filed last week in a case in which the group wants the Ohio Power Siting Board to reverse its approval of a 25-turbine wind farm in Huron County.

The Greenwich project is “one of the smaller wind farms that have been approved by the Power Siting Board,” said Sally Bloomfield, counsel for the project’s owner, 6011 Greenwich Windpark, LLC.

Seitz, as well as other lawmakers, contacted the Siting Board by email last August in support of a new public hearing in the case.

Seitz claimed that one of the earlier evening hearings in May was inconvenient for farmers. “In addition, the neighbors need to understand the ramifications of recently-enacted legislation such as SB 310 and the wind farm setback changes” in HB 483, Seitz wrote.

While both laws were passed earlier in the year, neither was in effect yet when the Siting Board issued its ruling in August granting the 2013 application from Greenwich Windpark.

SB 310, co-sponsored by Seitz, scaled back Ohio’s renewable energy and energy efficiency standards and froze any increases in their benchmarks for two years. The law also established the Energy Mandates Study Committee, on which Seitz sits.

HB 483 tripled property line setbacks for turbines on commercial farms that did not already have permits. Seitz spoke passionately against wind energy in the few minutes of public debate before that last-minute provision passed last year.

The day after Seitz’s email, a “late-filed” motion to intervene with a request for new hearing was filed by attorney Sam Randazzo on behalf of Omega Crop Co. Omega’s owners, Gerald and Connie Oney, are GNU members, according to the materials filed last week.

Some points in Randazzo’s brief for Omega are similar to those in Seitz’s email. Randazzo is general counsel for Industrial Energy Users—Ohio. Like Seitz, he has advocated scaling back the state’s renewable energy and energy efficiency standards.

Greenwich Windpark opposed the motion, noting that the record had been closed and the Siting Board was already scheduled to rule on the case in less than two days.

Moreover, the brief noted, Greenwich Windpark had mailed out notices to Omega and various other property owners several months earlier. Several hearings had been held in the community as well.

The case record also includes multiple comments from Oney and Kevin Ledet, chairperson of GNU. Those comments became part of the case file for consideration by the Siting Board.

“We got on board sometime around June of 2014,” Ledet explained. “It was even after [the Siting Board] had their public meeting in Greenwich,” Ohio.

“Originally most of the opposition thought these turbines were just small unimposing things,” Ledet said. It “didn’t register” how big the turbines would be.

Nonetheless, a sign-in sheet for a May 22, 2013 community meeting shows that Omega owner Gerald Oney attended.

Also, Bloomfield noted, the Ohio Farm Bureau Federation was a party in the case. That organization often intervenes in wind energy cases to represent farmers’ interests, she said. “They bring matters to our attention that we might not have known about but for them.”

On August 25, the Siting Board denied the late-filed motion and ruled in favor of Greenwich Windpark’s application.

Randazzo filed a motion for rehearing on September 23. On October 22, administrative law judge Greta See issued an order “to afford the Board additional time to consider the issues.”

That ruling was not a decision on the merits, explained Bloomfield. Rather, it was for the “limited purpose” of giving the Siting Board more time for the motion.

Although the case remains open, Bloomfield stressed that the Siting Board granted Greenwich Windpark a certificate. The company has begun to comply with some of its conditions, she added.

Meanwhile, in a pending rulemaking proceeding, GNU is urging the Siting Board to change its rules so that any adjacent property owner could prevent a waiver by another property owner, even if the waiver would not affect the person objecting to it.

“I believe it says all adjacent property owners to that wind farm have to sign waivers” for a setback or any other variance, maintained Ledet. “I think that’s something that’s going to have to be battled out in court.”

Ledet added that while his land does border a property where wind turbines will be, the closest would be “roughly half a mile” to the south. That’s farther than even HB 483 would have required.

Bloomfield said that if GNU’s interpretation were adopted, it would be a marked departure from prior law and practice. In the past, the Siting Board has consistently interpreted the law to say that any waiver “has to be granted by the people who were affected” by it, she explained.

A different result could raise constitutional problems, Bloomfield added. Among other things, it would be “an unfair taking of your property, in effect, by people who have nothing to do with it,” she said. “People three miles away could have a say over what you do with your property.”

Applying that interpretation to Greenwich Windfarm could also raise questions about retroactive rulemaking and other issues.

‘Ground to a halt’

Ledet said GNU is also trying to reach out to other communities “to help other people that are going to be facing the same onslaught” from wind farms.

For the time being, though, SB 310 and HB 483 have apparently put the brakes on most in-state wind development.

“The wind industry has kind of ground to a halt in Ohio,” Bloomfield said. Greenwich Windpark is the exception, rather than the rule.

Indeed, a January 2015 report from Pew Charitable Trusts projected a plunge in investment in Ohio’s wind energy from more than half a billion dollars in 2012 to essentially nothing through 2016.

Moreover, advocates have said, the Energy Mandates Study Committee testimony has so far focused on factors against wind and other forms of renewable energy. Critics have said they hope that will change.

“Too often the press are complicit in presenting an unduly rosy picture of ‘green energy,’” Seitz said in his email providing the GNU packet about the Greenwich Windpark case. “Both sides deserve a hearing and equal publicity.”