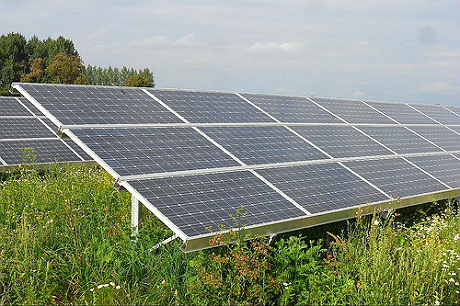 A solar array in Germany. (Photo by Thomas Kohler via Creative Commons)

As it has in Minnesota, Xcel Energy will soon be offering community solar to its customers in Wisconsin, albeit on a much smaller scale.

Under Minnesota’s community solar law, more than 500 megawatts of projects have been proposed in Xcel’s territory; meanwhile the utility continues to push back against the scale of some of the proposals.

Solar Connect Community, as the Wisconsin project is named, would generate a maximum of 3 megawatts of solar power through three or four arrays, to be built at various locations throughout the territory of Northern States Power Company of Wisconsin (NSPW), a subsidiary of Xcel. The utility filed an application with the state Public Service Commission (PSC) on April 27, if approved it will be the first of its kind in the state for an investor-owned utility.

“Anyone who wants to participate would choose their subscription size and give us an upfront payment,” Erwin said. “Essentially, the payment will be designed to cover the costs of the solar plus the administrative costs of doing the program.”

In exchange, she said, customers would get a credit on their electric bill every month, reflecting the amount of energy generated through their subscription.

Erwin said the program is a great alternative for customers who want to support clean energy but either don’t own their home or lack suitable space on their own property to install solar panels.

Xcel also offers a popular community solar program to its customers in Colorado, the first state to authorize the concept.

The Wisconsin arrays would be built in partnership with solar industry companies, Erwin said. Request for proposals would go out to bidders after the PSC approves the proposal, which could happen sometime in May, Erwin said.

Subscriptions costs have not yet been determined, Erwin said, and will not be known until the PSC approves the request and the RFP process is complete.

“Perhaps that was a bit of a spur for Xcel Wisconsin,” said Michael Vickerman, program and policy director for RENEW Wisconsin.

Erwin said the solar garden project does not have anything to do with Minnesota’s experience. However, she acknowledged that NSPW customers are making their wishes felt.

“They have been asking us for more options for their electricity supply,” she said. “This is what we came up with to respond to that.”

“Xcel has the opportunity here to be a leader,” he said. “I think that they are looking at this opportunity in Wisconsin to develop community solar gardens as being beneficial to their business model. And that might not only be a money issue for them, it might also be a marketing and social issue for them.”

If so, it is one that the company is approaching with caution. The number of arrays built will be totally dependent on consumer interest, Erwin said.

“If there is a ton of interest right away then we can go ahead with more than one installation right away,” she said. “If it is kind of slow-moving, maybe we would just do one to start with. It’s going to scale to the level of customer interest.”

Kevin Featherly is a Bloomington, Minnesota-based freelance writer who covered has public policy, business and technology for several dozen publications. He can be reached at klfeatherly@gmail.com.