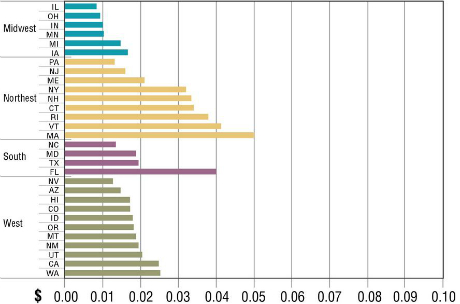 As Ohio’s Energy Mandates Study Committee takes up energy efficiency this week, data continue to show the programs are cost-effective for ratepayers.

An expert scheduled to appear before the committee this week has just released a 20-state study showing that even when when voluntary customer investments that produce other benefits are added to utility program costs under energy efficiency standards, the average “total cost” of saving electricity through energy efficiency is 4.6 cents per kilowatt hour.

That “still compares favorably” to the costs for new energy supply and electricity, said Charles Goldman in last week’s announcement of the new study. Goldman co-authored the report with Ian Hoffman and other colleagues at Lawrence Berkeley National Laboratory in California.

Goldman is scheduled to appear before Ohio’s Energy Mandates Study Committee this Thursday. Also on the agenda is a presentation by Gary Swanson of Energy Management Solutions, which has offices in New Albany, Ohio, and Excelsior, Minnesota.

The committee was established by Senate Bill 310, which modified the state’s energy efficiency and renewable energy standards and placed a two-year freeze on any increases in their benchmarks. The law charges the committee with studying the costs and benefits of the standards and making recommendations for future energy policy.

Most analyses on the cost of energy efficiency standards just count utility program expenses, which are often passed on to ratepayers.

A 2014 report from Berkeley Lab last year showed that energy efficiency is still cheaper than investing in other alternatives, especially in the Midwest. Using data from Ohio and 30 other states, Berkeley Lab calculated the national levelized program administrator costs for saving energy at 2.1 cents per kwh.

“The Midwest has a lower cost of saving energy than most of the rest of the country, and Ohio has among the lowest costs in the Midwest—about nine-tenths of a cent per kilowatt-hour saved,” said Hoffman. “That’s more than a third lower than the regional average and less than half the national average.”

“If what you’re interested in is the cost of energy efficiency as a resource, then you should use the utility’s costs vs. the utility system’s benefits,” commented Martin Kushler at the American Council for an Energy-Efficient Economy. “It’s an apples-to-apples comparison.”

The new report calculated average “total costs” by adding in costs that individual participants in utility energy efficiency programs might make for projects. Ohio was not among the 20 states that had data available for that report.

Examples of participant costs might be investments in improved building insulation or air conditioning, after any rebates. Other examples could be the cost of a new refrigerator or dishwasher, net of any rebates.

According to Hoffman, it would be wholly inaccurate to read the report to say ratepayers pay a much higher price for saving energy than was previously thought.

“That’s not really a conclusion of the report at all,” he said.

Rather, Hoffman explained, the report provides a bigger picture of the types of investments people and businesses are making to achieve energy efficiency—and other benefits as well.

“Instead of efficiency costing ratepayers more, the dollars that utilities collect from all ratepayers and spend on saving energy prompt the private sector to add their own investments, for their own reasons,” Hoffman noted.

Those private investments save more energy than the utility spending would on its own and, in turn, further reduce the energy costs to other ratepayers beyond what the ratepayer money by itself would achieve, he explained.

Private reasons for investing in energy efficiency might include saving energy for its own sake, in the case of environmentally minded consumers. “But more often, consumers are taking advantage of utility-funded discounts on more efficient appliances or improvements to their homes and businesses for a lot of other reasons,” Hoffman said.

Besides saving money on their electricity bills, for example, customers may be making their homes or businesses more comfortable and attractive, increasing potential resale value, or achieving other benefits.

“Regardless of the motivations of those consumers, the report shows that, on average, consumers are in essence doubling the investment that utilities are making in energy efficiency on behalf of all ratepayers,” Hoffman noted.

And besides providing individual benefits, those investments are yielding larger advantages.

Among other things, energy efficiency is linked to reductions in peak power demands. It also reduces the need for new generation plants.

As a result of those and other factors, energy efficiency tends to push overall electricity prices down, Kushler noted.

That’s not all, stressed Jennifer Miller of the Sierra Club.

“I hope that the [Energy Mandates Study] Committee looks hard at the costs and benefits of efficiency, because the benefits outweigh the costs,” stressed Rob Kelter, an attorney with the Environmental Law & Policy Center.

Unfortunately, Kelter said, “energy efficiency has been portrayed as an added cost for consumers.” However, he noted, Ohio’s law requires any energy efficiency programs under the standard to be “cost-effective.”

In other words, Kelter said, the law only lets utilities charge for energy efficiency programs under the standard if, on balance, they save money.

“Most observers would say that, as long as saving energy costs less than procuring it, you should go with the least-cost option,” Hoffman said. “That insures that your consumers are getting the least-cost resource for their utility dollar.”

The American Council for an Energy-Efficient Economy, the Sierra Club, and the Environmental Law & Policy Center are members of RE-AMP, which publishes Midwest Energy News.