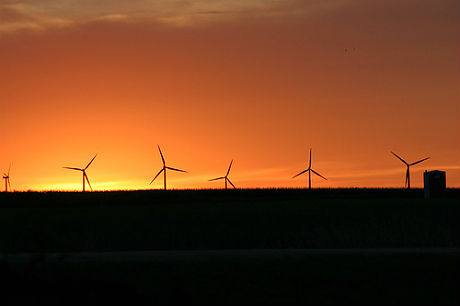 Driven by aggressive state policies, renewable energy’s share of electricity generation in Minnesota jumped from 12 percent to 21 percent from 2008 to 2013. Meanwhile, natural gas grew from 5 percent to 13 percent over the same period.

“Natural gas is becoming a more important part of the state’s power mix and it’s only going to increase,” said Nathan Serota, analyst with Bloomberg’s U.S. Power and Clean Energy Economics and co-author of the report.

The loser was coal, dropping to 46 percent from 59 percent. The reasons for coal’s decline range from plant closures to the plummeting natural gas prices, he said.

Despite Minnesota’s large increase in renewable energy — and having the 10th most stringent carbon target — the EPA’s Clean Power Plan does not suggest additional wind and solar resources because of the state’s already aggressive renewable energy mandate, Serota noted.

Instead, the plan’s draft report calls for a 42 percent “adjusted emission rate” (AER) reduction that the agency believes could be met mostly by switching from coal to natural gas and improving energy efficiency.

“How exactly renewables help Minnesota meet its target ultimately depends on how the state chooses to comply with the Clean Power Plan,” Serota said. “But we see renewables potentially figuring into that and having a role in meeting the adjusted emissions rate.”

The Bloomberg report points out that wind energy, even without the production tax credit, is cheaper than — or competitive with — coal, natural gas and combined heat and power.

“Wind in Minnesota is particularly low, it’s at the lower end (in terms of costs) of all states we have looked at,” he said. “Solar is in the middle of the road.”

Driven by state policy, renewable energy has come to play an important role in Minnesota. The state has seen 1.7 gigawatts of renewable energy go online from 2008 to 2012, almost all of it from wind, the report stated.

The state’s mandate requiring investor-owned utilities to produce 1.5 percent of their energy from solar by 2020 could bring an estimated 644 megawatts online, the report said.

Minnesota House Republicans want to roll back some of the state’s energy legislation. While Bloomberg remains “agnostic” on public policy the fact sheet shows “there is momentum underway and the changes that are occurring are predicated on the existing policy structure being there,” Serota said.

“Minnesota was chosen because it has a suite of policies that has made our industry take note,”  said Lisa Jacobson, president of the BCSE. “They see Minnesota as an opportunity state.”

The BCSE represents companies in energy efficiency, renewable and natural gas, she said. Members suggested having fact sheets on four high growth states in those areas, the others being Virginia, Nevada and Pennsylvania. Only fact sheets for Minnesota and Virginia have been released.

Minnesota has a programmatic approach to energy policies, a history of collaboration between government and industry officials, she noted. “Not only is Minnesota ahead of the game with a foundation of policies that sent market signals to a broad range of companies providing clean energy products and services,” Jacobson said.

“Minnesota is also ahead of the game when it comes to open, transparent policies that help (guide the state) through the big issues and challenges that lie ahead when it comes to energy planning.”