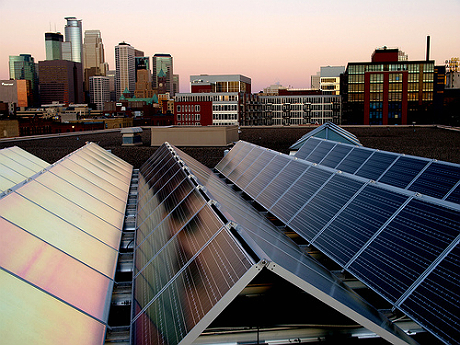 As Minnesota emerges as a leader in solar power, an event here next week will take a broader regional perspective on the growing industry.

The second annual Midwest Solar Expo, which takes place May 13-14 in Minneapolis, is expected to draw as many as 300 people, including speakers from industry and advocacy groups.

The event will attract a mix of policy wonks, industry representatives and installers, said Geoff Stenrick, president and chief executive officer of the solar distributor SimpleRay Solar, one of conference’s major sponsors.

“In the Midwest we have begun to see a very strong market,” he said. “It’s starting to come to fruition throughout the Midwest and it is neat to see. I still think over the next four to eight years we will see grid parity in solar in the Midwest with the west and east coasts.”

Midwest Energy News is a media sponsor of the event.

Minnesota’s success in seeing so many proposals for community solar gardens and the debate of the “value of solar” indicates that the state is a national leader, he said.

“You have nearly half a gigawatt of community solar applications in Minnesota, with colleges and Fortune 500s completely offsetting their electricity with solar,” he said. “What’s great is it is locally produced energy that comes from Minnesota and not from outside the state.”

As evidence of the Midwest’s ascent, Stenrick points to presentations by Silicon Valley-based Solar City and SunEdison, Inc. both major players in the nation’s burgeoning solar industry.

“It’s a big deal and it’s great to see them here,” he said. “It means we’re a valuable market and not just flyover land anymore.”

Breakout sessions feature solar financing in the Midwest, commercial solar development, the community solar garden movement in Minnesota and the challenge of a potentially diminishing “investment tax credit” after 2016.

The issue of whether rooftop solar and utilities can thrive together and what market trends are happening in the Midwest will fall under the microscope at the event. The afternoon includes product training and presentations of several papers, a new addition to the Expo.

“We’re taking a practical focus — it’s not just a party for the local installers, we’re trying to reach people from outside the state, too,” Stenrick said.

Stenrick’s firm, SimpleRay Solar, is one of the Expo’s largest sponsors. It works closely with installers on selecting and supplying the appropriate panels and parts for solar projects. In addition, SimpleRay Solar provides design expertise and advice on battery systems.

The conference, he said, should have several good sessions for installers looking to reduce build times and costs, said Stenrick. Solar City, in particular, has developed a system to increase installations dramatically, he said.

That information could prove useful to a Midwest audience of installers who, at least in Minnesota, will see a substantial increase in their workload as solar projects ramp up, he said.

Solar City’s approach to development is largely untested in the Midwest. Homeowners can have the company install solar panels on their homes and then enter purchase power agreements that will reduce their energy bills.

Although Solar City operates on the coasts it has not entered the Midwest. Some states, such as Wisconsin, have proposed prohibiting such third-party ownership models while others have laws that hinder such development.

Stenrick’s also hoping to see some deals come out of the event among suppliers, distributors, manufacturers and others in the industry.

“At the conference you’ll get to know the people and products in the industry,” he said. Attendees will also learn that solar is “a viable, strong market — it’s not a cute niche market for rich hippies anymore.”