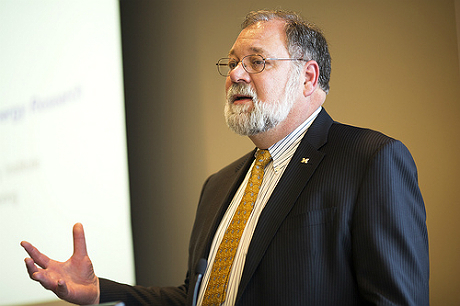 The University of Michigan’s Energy Institute is like a timeline of this country’s energy past, present and future.

The institute was founded in 2006 and built on the legacy of the Michigan Memorial Phoenix Project, a “living memorial” launched in 1948 that promotes research into the peaceful application of nuclear energy. The Ford Nuclear Reactor — decommissioned in 2003 — is located in the back of the Institute’s Ann Arbor building.

Today, researchers are exploring the latest in advanced battery technology and energy storage in new labs just down the hall from the old reactor.

Since Mark Barteau, who spent much of his career at the University of Delaware, became director of the Energy Institute in 2012, he has focused on raising the awareness and applicability of the work being done at the institute to inform policy discussions at the state level.

It’s a particularly busy time as Michigan revisits renewable-energy policy, makes up for lost capacity as coal plants shut down and protects itself from aging oil pipeline infrastructure.

In an interview with Midwest Energy News this week, Barteau navigated the conceptual and policy aspects of these issues. A professor of chemical engineering, Barteau and other Energy Institute researchers have had a hand in these topics and more.

A recent institute study examined how much it would cost to expand Michigan’s renewable portfolio (findings show the costs are modest) and Barteau chaired a National Research Council study in 2013 looking at transporting diluted bitumen and pipeline safety.

Barteau notes that major changes to the electric grid won’t happen overnight. Fossil fuels are still part of the foreseeable future, he says, and attention should be paid to managing an aging infrastructure. He wrote an op-ed in February in support of building the Keystone XL pipeline. He doesn’t think a statewide ban on hydraulic fracturing, as some advocates here are pursuing, would be beneficial for Michigan.

But ultimately, his research interests are in the ability to scale renewable-energy projects as a way to diversify and make flexible the country’s energy portfolio. The debate in Lansing rarely is rooted in a fully informed assessment of the benefits of renewable energy, he said. He supports expanding Michigan’s Renewable Portfolio Standard beyond 10 percent and questions why some lawmakers — and perhaps even the governor — seem intent on stopping the progress made here by abandoning standards.

“The RPS and energy optimization program have been great successes,” Barteau said. “I’m not sure why we’d want to go back — we should be building on the successes.”

Midwest Energy News: Republican lawmakers in Lansing seem intent on ending energy mandates for renewables and efficiency and suggest those can be replaced by Integrated Resource Planning (IRP). Do you think that’s possible?

Barteau: I’m not quite sure where the idea comes from that it’s an either/or proposition. There are certainly states that have both. The IRP is really aimed at making sure we have capacity and keep the price down and things like reliability. It really doesn’t frame a target for something other than a business-as-usual pathway. It’s not in conflict with that, but if we have an RPS that sets a target for renewables, then that would be one of the things that gets factored into the IRP and could be done pretty easily.

But could IRP continue to grow renewables, if that is the goal?

It’s pretty clear that if you don’t set the target higher than today, we find ways to not get there. Even if you look at the governor’s plan, his renewables portion under the best-case-scenario is in the low 20 percent. In the worst case, it’s in the single digits.

The IRP is a mechanism to address a different problem. Public service commissions want to be sure the lights stay on, the heat stays on, the reliability is there and the costs are contained. That’s setting the base case and those are important criteria. There are other criteria related to the environment, emissions and renewables that we should also be bringing into our planning, practice and investment. The RPS is a useful way to do that. I just don’t think the IRP gives you the kind of leverage you need for those kinds of objectives.

Republicans argue that PA 295 was enough to give the wind industry a jumpstart, but that now it should be able to compete on price alone. Is that the case?

Renewables are cost-competitive and our RPS study shows that. It’s kind of funny: The IRP, for example, is based on making sure that going into the future our needs are met. So why do we turn around in the case of renewables and say that we should be making essentially a day-to-day decision? I really think that if you just let the market go where it will, that doesn’t help with long-range strategy and hitting longer-range targets.

As we transition away from coal and talk about the roles of renewables and natural gas, some critics suggest that because wind and solar are intermittent, they are not reliable and therefore natural gas is more important.

I know that’s the typical way of looking at it, but I think that’s upside down.

I would argue that resilience and flexibility comes in part from diversity. I think one of the roles renewables can play is that you’re not dependent on gas for as much of your total power supply when gas supplies are constrained and gas gets expensive. In some ways, renewables are a way to relieve the pressure on gas should that become a pinch-point in the future. I think we often tend to not look at it that way.

Michigan’s fracking industry is in a bit of a lull right now. Do you see any changes — whether a ramp up or a continued decline — in the near future?

Not in the near future. The resource is fairly large and the geology is such that it’s going to be more difficult and expensive to get at, especially when prices are low and we’re in an oversupply situation like we’re in. That’s unlikely to be developed. The good news is technology changes, awareness of environmental issues increase and solutions change. In some ways, not having it developed immediately gives Michigan a chance to learn from experiences elsewhere.

Advocates have launched another ballot drive attempting to ban fracking in Michigan. Do you think that would be beneficial for the state?

I don’t think so. There certainly are concerns the public has — some legitimate, some exaggerated. But I think this can be done safely. It should have proper oversight.

On another front, you’ve done research into oil pipeline safety in the Midwest. How comfortable are you about the level of safety of that infrastructure?

It’s never absolute. I’ve published op-ed pieces saying we should go forward with Keystone XL. One of the arguments is that a lot of our infrastructure is aging. Do you look at (ruptures) and say, “We’d better not build any more pipelines, they leak?” Or do you say, “Our pipelines are old, we ought to build some more?” The alternative is to do more shipment by rail. That’s a less desirable, less economical, less efficient way to go on almost every front.

The Straits of Mackinac is a tricky issue. That pipeline is 50-plus years old. That’s a very vulnerable location and some of the simple modeling studies show that if it were to leak, the way the oil would be dispersed would pretty much be the worst-case scenario. So what do you do? Do you hold your breath and hope? Do you replace it with new technology? Or do you shut it down and say we need to do something different?

The fact of the matter is we’re going to be using fossil fuels for decades to come and as much as we wish otherwise, even as we’re transitioning to more renewables over a period of decades, we need to be mindful of the infrastructure that we have today and that will be needed in that transition period.

The Energy Institute launched a new public-private battery storage research program in 2013. With Tesla’s announcement last week and growing interest in distributed generation, should this topic be scaring utilities?

I’m tempted to say it should. Certainly if you read the press releases from Tesla you might think it would. [However] it remains to be seen how enabling it is for household-level solar.

But we’ve seen how some utilities have reacted to the idea that their customers would start generating their own power — they want higher fixed charges and critics say utilities are attempting to discourage it. How would you approach this issue if you were the CEO of a major utility?

It’s hard to take some of the anguished cries (from utilities) seriously because the level of distributed generation is just not that significant at this point. Rather than trying to strangle it in the cradle, I think you sort of realize this is a trend. The question is how are you going to get out in front of it and when it does become a more significant fraction, how will you have factored that into your planning and your distribution?

In some ways, it’s not like you have to be a wizard. California is already ahead of us. There are good models out there to watch and draw some examples from. But the idea that 1 percent or 1.5 percent is somehow going to bring the grid in this part of the country to its knees might be unnecessarily alarmist.