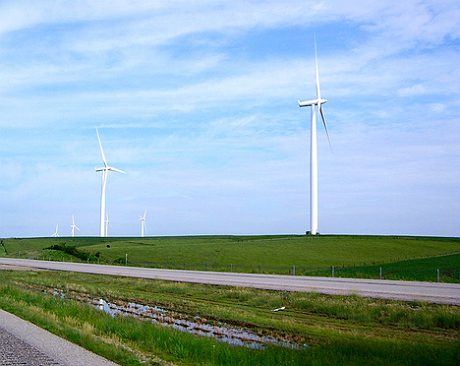 (Photo by archerwl via Creative Commons)

With one of the richest wind resources in the U.S., Iowa is well positioned to breeze past not only its own Clean Power Plan carbon-reduction requirements, but also help with those of a half-dozen neighboring states as well.

Tom Wind, one of the authors of a just-published study, says Iowa can produce wind energy so much more cheaply than its eastern and southern neighbors that it’s almost certain to be tapped to bring other states into compliance.

Wind, an energy consultant, said that he and his research partner, Dan Turner, a program analyst for Windustry, aren’t the first to reach this conclusion. The federal Department of Energy in 2015 updated its 2008 Wind Vision study, and found it would be feasible, both technically and economically, for Iowa to add about 21,000 megawatts of wind between now and 2030, bringing the state’s total wind infrastructure to 27,000 megawatts.

“We’re connecting the dots from all of those other studies. It’s a no-brainer,” said Wind, whose research was financed by the Energy Foundation.

Forecasting energy economics is tricky because of fluctuating costs of wind and natural gas, changing environmental regulations, and whether or not the Production Tax Credit will be in effect, according to Wind. As a consequence, he said, “people are hesitant to stick their necks out.” But looking at the studies done to date, he said, “They all say the same thing: that this is feasible.”

As of the end of 2014, Iowa had developed 5,688 megawatts of wind capacity, enough to provide about 28 percent of the electricity used in Iowa. However, that’s only about 1 percent of the state’s overall potential of 570,000 megawatts.

Wind also notes that wind energy in Iowa is cheap – much cheaper than in Illinois, Ohio, Missouri, Wisconsin and Indiana, for example.

The cost of installing a wind turbine is pretty much a constant, he said. What varies is the amount of power a given turbine can produce based on wind speeds.

The National Renewable Energy Laboratory estimated how much power could be generated yearly based on the wind that typically blows in each state, and it calculated the following (in terms of gigawatt hours):

States to the east and south can generate some additional wind power, and undoubtedly will as part of their strategy for reducing carbon dioxide emissions from power plants, Wind said.

“There are usually sweet spots in every state where there are good wind resources and available transmission,” he said. “Chances are they’ll use all their best spots first.”

Then, he said, the search for the cheapest wind energy will bring them to Iowa.

Some of them are already buying Iowa’s wind energy. Alliant Energy, which serves parts of both Iowa and Wisconsin, ships some wind energy from Iowa to Wisconsin, he said.

If Iowa is to sell more wind energy to states to the east and south – its northern and western neighbors have plenty of wind themselves – it will have to invest in more transmission capacity, Wind said. There’s no real surplus of capacity in the transmission system at present.

Now pending before the Iowa Utilities Board is a proposal to build a major transmission line – the Rock Island Clean Line — that would carry wind power from northwestern Iowa into Illinois.

“What does that tell you?” Wind asked. “That tells you that wind energy is a whole lot cheaper in northwestern Iowa than in Illinois. It looks like it’s about $2 billion cheaper. That’s the cost of that line.”