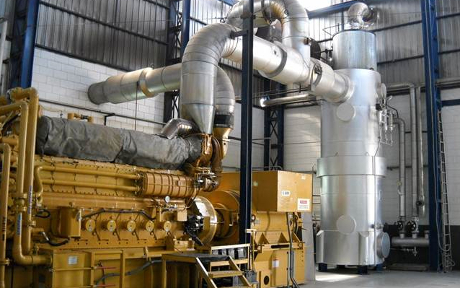 Combined heat and power systems capture waste energy so that one fuel source can provide both heat and electricity. Courtesy of Caterpillar Inc.

Ohio continues to have a huge untapped potential for combined heat and power, or CHP — a clean energy technology that could save customers money and improve the state’s electric security while capitalizing on the current shale gas boom.

However, a “freeze” in the state’s clean energy standards and other factors still slow down the payback period for companies and cities investing in CHP, business leaders reported at an Energy Ohio Network program in Columbus last week.

Moreover, neither state senators Troy Balderson (R-Zanesville) nor William Seitz (R-Cincinnati), who spoke at the event, offered assurances that policy incentives to help the industry grow would be back in place soon.

Among those technologies is CHP—the simultaneous or sequential use of power and heat from one fuel source.

Many facilities use natural gas in industrial processes that release excess heat into the air.

“Instead of letting those thermals go away, we recover them,” explained Kevin Abke of Ohio CAT’s Power Systems Division in Perrysburg, Ohio.

That heat energy can power electric generators. It can also produce hot water and, through condensing processes, chilled water.

Typically, businesses use that electricity and water in their plants and facilities, but nonprofit organizations, cities and other entities can use CHP too.

For example, CHP is used to heat streets and sidewalks in Holland, Michigan, to melt snow and ice, said Bobby Oakwood of Siemens Energy in Cincinnati. The city council voted to expand that system in March.

Making an energy source do double duty increases efficiency. “You increase your efficiency 19 percent,” Abke noted in one example.

In theory, efficiency could be as high as 95 percent if a system recovered carbon dioxide (CO2) emissions, he added. Even without CO2 recovery, though, the technology offers big benefits, Abke stressed.

CHP “can also operate as a standby system” in case of a power outage, Abke said. “You become grid independent.”

To the extent that CHP’s energy efficiency lowers overall demand on the grid, all utility customers could save on their electric bills, supporters say.

Making and installing that equipment also involves “a heck of a lot of great jobs,” added Tony Kuhel, an energy engineer now at Escalys in Solon, Ohio. And developing applications for CHP and other distributed generation can spur “new technologies and new ways of doing things.”

Doing more work with the same amount of fuel could let companies and other customers spend substantially less for energy. But, of course, CHP systems cost money too.

“The economics drive everything,” Abke stressed.

The savings in each case depend on multiple factors, including how much customers would otherwise pay for electricity, utility standby charges or other fees, opportunities for demand response and capacity payments, available rebates or tax credits, and policy incentives.

“I amortize the equipment over a 10-year payback.” Abke said. But, he noted, “Industrials like to see three to five-year paybacks.” And investments in CHP often compete with other capital projects.

Better terms from utilities could help speed up the payback period, said Oakwood.

Examples might include lower charges and fees, and better net metering provisions. Oakwood noted that utilities in other states are often easier for CHP customers to deal with than Ohio utilities are.

According to CHP advocates, public policy also plays a role. However, the future of Ohio’s energy laws dealing with CHP is uncertain.

The same 2012 law that established a regulatory framework for Ohio’s oil and gas production by fracking, or hydraulic fracturing, also let CHP projects count towards the state’s energy efficiency standard. More than a year after passing that law, however, the state Public Utilities Commission (PUCO) still had not adopted rules to implement it.

Then last year, Senate Bill 310 imposed a two-year freeze on increases in benchmarks under the energy efficiency and renewable energy standards. The law also relaxed requirements for what counts towards those benchmarks.

Now the Energy Mandates Study Committee set up by SB 310 is charged with reviewing the costs and benefits of those standards and recommending possible additional changes to the law.

“I have great optimism for combined heat and power,” Seitz said when he took the podium. “If we can save the exhaust that otherwise is going up the smokestack and use it to make electricity, why would we not want to make good use of that resource?” the chair of the state senate’s public utilities committee added.

“The issue is mandates,” stressed Seitz. “We’re Republicans. We don’t like mandates. Mandates to me look like Joseph Stalin.”

Balderson said his goal in sponsoring the bill was “trying to find a way to make it inexpensive for Bob and Betty Buckeye” to pay for electricity. Riders for renewable energy and energy efficiency standards are among multiple charges that utilities pass on to consumers.

However, consumer advocates have also cited the existence of market fluctuations as a reason why public policy should support energy efficiency as a hedge against possible price increases in the future.

The Energy Mandates Study Committee has been hearing testimony from witnesses on an invitation-only basis. The committee will likely meet twice more before wrapping that process up in July, Balderson said.

Neither Seitz nor Balderson would make a firm prediction about what the committee would ultimately recommend.

Nonetheless, Seitz reiterated his strong personal views on the standards, which he says will be complicated by the U.S. Environmental Protection Agency’s proposed Clean Power Plan.

“My view is we would be foolish to continue marching up State Mandate Mountain with our state mandates as long as there is uncertainty over the final contours of the U.S EPA rule and whether it is legal,” Seitz said.

“So, while I was fully prepared to continue with our mandate program after 2016, I have changed my mind because of the pendency of the U.S. EPA’s overreach,” Seitz added. “This is a major problem, and we have got to stand up to President Obama and his administration.”

Under the proposed rules, however, energy efficiency and renewable energy would count towards state targets for carbon emission reductions. Moreover, some analyses have concluded that state clean energy standards could significantly lower the projected costs for complying with the rules.

Seitz seemed more receptive to the idea of grants for CHP. However, whether the state would fund such a program appeared uncertain.

Perhaps such funds could come from an increase in the state severance tax for oil and gas, suggested Lance Traves of Labyrinth Management Group in Medina, Ohio. After all, Traves noted, growth in CHP could well expand the market for the state’s shale gas.

Seitz and Balderson weren’t hostile to the idea. However, both were skeptical about its chances for success.

Also, said Seitz, the severance tax has involved a heated debate. Among other things, Gov. John Kasich has proposed using an increase in the tax to offset a decrease in the state income tax—a plan with which Seitz and some other lawmakers disagree.