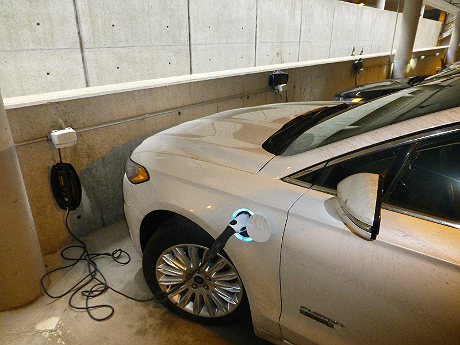 Employees at 3M in Minnesota can pay $30 a month for workplace charging. (Photo courtesy 3M)

At 3M’s sprawling 1.5 square mile campus east of St. Paul, electric vehicle owners have more places to find a charge than any other location in the state.

The technology giant has 44 charging spots sprinkled throughout the campus’ 11,000 or so parking spaces, including two fast chargers available in visitor parking. Employees pay $30 a month for the privilege.

“Employees like the opportunity to be able to charge at work and it’s worked out fine,” said Keith Miller, 3M’s sustainability strategic adviser. “There haven’t been any issues at all. There are an increasing number of employees taking advantage of it so we’ve added more spots.”

3M was featured in a series of case studies highlighted by a Minnesota agency seeking to convince more businesses to offer charging locations.

The focus on workplace charging is part of a broader effort to move more charging units into businesses.

In Minnesota, the state Pollution Control Agency (PCA) and organizations such as the Great Plains Institute have collectively developed websites, materials and policy materials that promote public and private PEV charging stations.

Developed by PluginConnect LLC, WorkplaceCharging.com is part of the PCA’s effort to convince more businesses to offer charging locations. The Great Plains Institute has an initiative underway called “Drive Electric Minnesota” that brings together government, private business and nonprofits in an effort to build PEV infrastructure and promote its use.

Minnesota has an estimated 3,112 EV owners as of February 2015, according to Fran Crotty, the PCA’s electric vehicle program administrator. The state has 200 public charging stations and 416 outlets, making it a leader in the Midwest, she said.

Plugshare, which tracks PEV stations, reported in April that in the first quarter Minnesota ranked in the top 10, adding 35 units. In the Midwest only Ohio, with 37, added more.

The Twin Cities is among the top urban areas in the country, with more than 100 public charging stations. Cities and counties are among the leading providers of chargers but they can be found at the State Capitol, the University of Minnesota, the airport, Macalester College, several parking ramps and Nissan dealerships.

The PCA’s website offers “information we’re trying to get out there about ways we can help Minnesota businesses with want to provide these services,” Crotty said. “It’s all part of attracting and retaining high quality employees as well.”

The PCA’s next project is to have all electricity used by public charging stations offset by wind or solar energy through a program being developed by the Great Plains Institute, she said. Charging stations along Metro Transit’s Green Line light rail and at the airport are similarly “powered” by renewable energy, Crotty noted.

The Legislature has taken notice. A bill in the Senate and the House that would create a vehicle rebate program for PEV buyers has garnered some bipartisan support and remains in play.

Minnesota businesses who might consider installing charging stations have until the end of June to receive a free consultation from PluginConnect.

John Bailey, who developed the website and wrote a manual for the PCA called “Charging While You Work,” has created a concept called “Workplace Charging Simple” that offers a relatively inexpensive way to move a PEV program forward.

“We’re not selling anything except ideas and giving recommendations on types of technology a company should be looking at,” Bailey said.

Bailey explains challenges to the expanding charging stations. Some businesses considering an PEV program have received bids from national charging companies of $12,000 for two charging units.

Those are “Level 2” units that provide 240 volt charges that can fill a car in three to five hours, he said. However, he sees that as overkill and a lot of money to pay for only two charging bays.

Instead, the WPC Simple approach offers a different solution. For $12,000 a business could install 10 to 12 charging units, he said. The majority of power units can be Level 1, a less expensive 120 watt option that requires several hours for a full charge. Over a workday it’s enough to add 30 miles of capacity for a typical PEV, Bailey said.

The lower levels — along with a reasonable fee for using the stations — also discourage drivers from relying solely on workplace charging, which can tax the electric grid, Bailey notes. It’s better for if PEV owners charge at night.

“Free charging might have the odd effect of people not charging at home, and making the workplace the main place of charging,” he said. “With Level 1 units you can’t get a super amount of extra electricity, so it will still drive people to charge overnight.”

Another reason to add a monthly charging fee is that employees without PEVs might otherwise complain they are not getting fairly treated. “The logic is it cuts down conversation about some employees getting some benefit and others not,” he said.

Bailey would like to see more office park and multi-tenant owners begin offering PEV charging. Among the businesses that have been active, not surprisingly, are power companies who see electric vehicles as a potential bright spot in an otherwise stable or declining market for electricity.

Great River Energy (GRE), a wholesale electric service provider to 28 distribution cooperatives, has had two charging stations since 2011 at its Maple Grove headquarters.

Just one employee currently drives to work in a PEV but several others have plug-in hybrids, said David Ranallo, a senior marketing specialist at GRE.

Despite just a handful drivers who can make use of the PEV infrastructure the company is looking to expand and may have good reason for optimism — a recent brown-bag on the topic drew more than 70 employees. Another 50 employees watched a video of the meeting.

“To encourage the adoption of PEVs, we are working to increase opportunities for our employees who drive PEVs to charge their vehicles away from home,” he wrote in an email exchange. “We hope to learn from our employees’ experiences with electric vehicles, and believe they will become ambassadors of this innovative technology.”