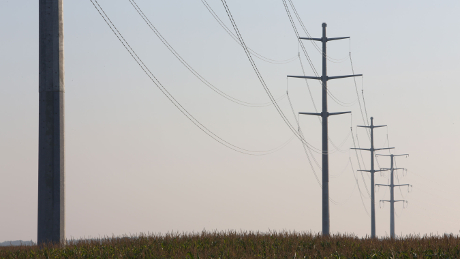 An eastern Michigan transmission company has completed a $510 million project to tackle challenges of renewable-energy access and economic development in rural parts of the state.

The system, which was built in phases over the past three and a half years, can now support up to 5,000 MW of generating capacity. Company officials said it’s the largest project in ITC history.

It was conceived as a way to help the state meet its 10 percent renewable-energy standard by accessing wind resources in the Thumb, which generates a majority of Michigan’s wind-energy output.

“This now provides an electric infrastructure backbone that can serve the ability not just to interconnect renewables but also provide a basis to expand the region’s economy and attract more businesses,” said Linda Blair, president of ITC Michigan.

“To me, it’s a further extension of farmers sort of living off the land,” she said.

Historically, the region was served by a single 120 kilovolt line, which limited the ability to develop more wind as well as modern agriculture advancements, Blair said.

The agribusiness community has said that places like the Thumb encounter “end-of-the-line” issues due to aging grid infrastructure. Their ability to grow is hampered by access to reliable electricity, creating a chicken-or-the-egg scenario: It can be difficult to invest in grid infrastructure if there are no customers to serve, but it is prohibitively expensive to expand a business if there is no grid infrastructure.

Blair said the system is carrying 1,000 MW of wind capacity, which means there’s room for five times that amount on the system.

But how soon the system may fill up is uncertain. The project completion also comes as some Thumb-area residents are pushing back against further wind development.

Earlier this week, Meade Township residents in Huron County voted in a referendum against a 48-turbine wind project by DTE Energy. The township board had previously approved the project in November by a  4-1 vote. DTE is reportedly looking for other sites to pursue its project.

Huron County also placed a moratorium on further wind development last month as officials work on an ordinance to address siting and annoyance concerns. The 90-day moratorium can be renewed if county planners have not resolved issues in the zoning ordinance, said Board of Commissioners Chairman John Nugent.

Blair said opposition against new wind development “will not affect the operation of the line whatsoever.”

While Blair said the company has learned over the past 12 years to work closely with landowners and communities that would be affected, ITC “on occasion had to use the condemnation process to ultimately determine the value of the land and essentially give us the right to use a certain piece of property.

“One of the remarkable stories is that with 140 miles of transmission and hundreds upon hundreds of property owners, at the end of the day we had only a handful of cases that ultimately had to go to condemnation,” Blair said. “The vast majority we were able to resolve amicably.”

ITC predicts the project will encourage competition on wholesale market prices by dispatching energy at cheaper prices than other generators.

The Midcontinent Independent System Operator, or MISO, identified the Thumb Loop as a “multi-value project,” meaning it benefits ratepayers throughout the region.

A MISO spokesman said in an email that the project costs will be allocated among ratepayers throughout the region in a monthly energy usage charge. For about $12 a year, the average electric customer in the region will see $33 in annual benefits from lower delivered electricity costs, MISO spokesman Andy Schoenert said.

In a statement, Gov. Rick Snyder called the project a “good investment for Michigan.”

“It has allowed us to expand our agricultural processing abilities and allowed us to add low-cost renewable energy to our grid and saved Michigan ratepayers real money. It is a good example of why we need to evaluate transmission in our overall planning to ensure an adaptable, affordable, reliable, and environmentally protective energy future.”