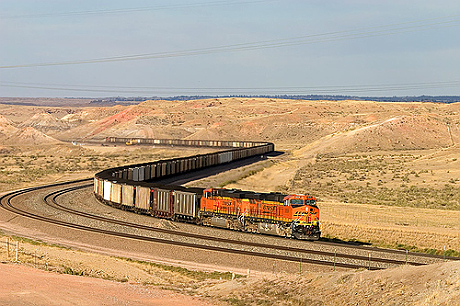 A pair of southern Illinois lawmakers are declaring war on coal — specifically, the kind hauled hundreds of miles by rail from Wyoming’s Powder River Basin.

The lawmakers have yet to provide specifics about the bill, expected to be filed in the coming days. But at a news conference at the Capitol in Springfield last week, they said the measure would be aimed at generating jobs and revenue for the state and could even help reduce greenhouse gas emissions.

Whatever is proposed will only complicate an already high-stakes energy debate in the Land of Lincoln — a debate that so far has focused on Exelon Corp.’s nuclear fleet and efforts by clean energy advocates to stimulate more renewable energy and energy efficiency.

But the state’s coal industry remains the elephant in the room.

Illinois is the nation’s fourth-largest coal-producer. Coal-fired power plants represent 40 percent of the generating capacity and along with mines that dot southern Illinois employ thousands of workers. And some of the industry’s biggest players, like Peabody Energy, Arch Coal and Murray Energy, have operations and reserves there.

“When we do an energy policy, an energy bill in the state of Illinois, coal has to be a part of it,” Bradley said at the news conference.

Besides economic benefits, the legislators said the measure represents common sense. Coal-producing counties in southern Illinois have above-average unemployment rates, and consumers pay an estimated $1 billion a year to transport coal from Wyoming.

To illustrate their point, Manar and Bradley referenced Dynegy Inc.’s 915-megawatt Coffeen Power Station, which is about 6 miles from the Deer Run coal mine at Foresight Energy’s Hillsboro energy complex.

Despite the proximity of the mine, the plant burns PRB coal transported 900 miles by rail from southeast Wyoming.

“How do you have a coal mine sitting 6 miles from a place that can burn it, and they’re shipping in Western coal?” Bradley said.

‘Our coal is better’

The answer to that question — and to why Illinois power plants use very little locally mined coal, in general — can be found in the 1990 Clean Air Act amendments. The federal regulations clamping down on sulfur dioxide emissions prompted generators to turn to PRB coal as a less expensive alternative to installing scrubbers.

At the time, more than 60 percent of the coal burned in Illinois was mined in-state and the coal mining industry employed 10,000 people. Today, less than 10 percent of Illinois coal remains in-state.

Today, many Illinois coal stations still running have scrubbers to comply with state and federal regulations. And if the plants have emission controls, they could be using coal mined in state.

“If you’re scrubbing all coal, why not be burning Illinois coal?” Bradley said. “The only reason we’re not is because we continue to allow the cost of transportation for this garbage coal from other states to be shipped into Illinois. Our coal is better.”

Houston-based Dynegy is the state’s largest owner of coal-fired generation, but uses no Illinois coal. The company does mix some Illinois coal with PRB coal at some of its recently acquired Ohio plants.

With no bill filed yet, it’s premature to say whether the company would support a measure to encourage use of Illinois coal, spokesman Micah Hirschfield said. He would not comment on whether company officials have met with Manar, Bradley or other legislators about the issue.

Of Dynegy’s 10 coal-fired power plants in the state, four have scrubbers, and two of those would allow the company to use some blend of Illinois coal, which has a higher energy content than PRB coal and higher sulfur content.

But that decision, too, isn’t as simple as sourcing fuel from another mine. It would depend on economics, Illinois environmental regulations and existing coal supply contracts, Hirschfield said.

The Illinois Coal Association, which represents the state’s coal producers, supports the effort to encourage the use of locally mined coal, 85 percent of which is sent out of state. Meanwhile, Illinois is among the largest coal-importing states in the country, according to 2013 data from the EIA.

“Obviously it’s something we’ve thought about for the last 25 years,” Gonet said. “We’ve always been interested in creating a market for our coal.”

Like others, Gonet is waiting to see the bill language. But the issue deserves additional study given two developments, he said.

One is the regulations that will require most if not all coal-fired power plants in the state to install additional pollution controls, which may or may not include flue gas desulfurization equipment, or so-called wet scrubbers, that would enable use of high-sulfur Illinois coal.

The other is U.S. EPA’s Clean Power Plan, which aims to slash carbon dioxide emissions from existing power plants. While the coal industry has pushed back hard on the rule, there could be a silver lining for Illinois producers.

According to Manar and Bradley, bituminous Illinois coal produces 4 percent less carbon dioxide than subbituminous PRB coal. And that doesn’t include emissions associated with hundreds of trainloads of coal coming from Wyoming to Illinois each year.

Still, it’s unclear specifically what southern Illinois legislators can do to make Illinois coal more attractive for local generators, whose plants have run primarily on PRB coal for the past 20 years.

During their news conference, the lawmakers suggested they would try to disallow costs associated with transporting coal by rail. But while those costs were once regulated by the state utility commission, they no longer are.

The lawmakers also hinted that the measure could include funding for power plants that have yet to install pollution controls that would let them use Illinois coal. But Illinois is cash-strapped, and meaningful funding for coal plants would go far beyond any additional tax revenue generated from mining.

Also unclear is the extent of any new jobs that would be created if some Illinois power plants sourced their coal from in-state mines.

Manar and Bradley said a switch in coal could create 8,000 new jobs. But like most other industries, the Illinois coal industry has seen productivity increases over the last two decades.

Illinois produced almost 58 million tons of coal in 2014, according to the coal association. That’s almost back to the 1990 level, when the state produced 62 million tons. Still, employment today is less than half what it was then.

Gonet, too, is unsure how many additional jobs would be supported if Illinois generators bought their coal from local mines. But he does see potential. And the association is not concerned about cannibalizing sales to other states or overseas.

“I don’t see us losing the market outside of Illinois,” he said. “And we have the capacity to do a lot more.”