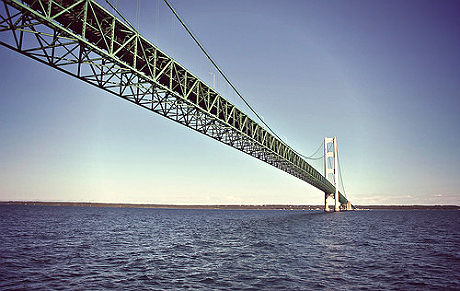 Michigan lawmakers are in the process of developing a more powerful electric connection between the Upper and Lower peninsulas, which is viewed as a long-term solution to the U.P.’s growth and energy independence.

But connecting the two peninsulas — which are separated by the five-mile-wide Straits of Mackinac — is an expensive endeavor, mostly because the energy supply and demand do not yet justify the costs. Without the transmission connection, lawmakers say the U.P.’s economy is constrained.

“We’re limited for growth down the road if we don’t address the issues of where energy will come from and how we get it in,” said Sen. Tom Casperson, a U.P. Republican taking the lead on connecting the two peninsulas legislatively. “And we don’t want to be in that position.”

Last month, Casperson introduced the “Michigan electric infrastructure act,” which will direct a seven-member board to seek proposals within 60 days to increase the “electrical connectivity” between the two peninsulas. A bipartisan slate of House members introduced a companion bill last week.

An industry group representing the state’s largest investor-owned utilities has come out against the legislation, questioning whether transmission will be the lowest-cost option to solving reliability concerns there. Others are concerned the legislation would exclude a large number of potential developers.

The bill seeks to unite the two peninsulas into one resource adequacy zone within the Midcontinent Independent System Operator, or MISO, footprint. The U.P. currently shares the same MISO zone as Wisconsin, while the Lower Peninsula is in its own. The peninsulas are connected now by two underwater transmission lines known as the McGulpin Interface.

Casperson said a stronger connection will help develop the region’s economy, particularly mining. Gov. Rick Snyder drew attention to the issue in a special message on energy in 2012. In March, Snyder reportedly called the lack of connection a “historical artifact.”

The bill “is designed to set up a board to do an upfront assessment to see, No. 1, where the logical place would be to site it, and to also see the feasibility of it” Casperson said. “We have to know what the cost is — we know that will probably be the biggest hurdle we go through.”

Under the bill, a governor-appointed seven-member board made up of representatives from state agencies and one resident from each of the peninsulas would identify areas lacking in transmission.

Until now, cost has been the underlying factor against building such a connection. Under the bill, those costs would be shared by Michigan residents.

An expert from Michigan State University predicted in November that the cost to build across the straits could be at least $50 million. A MISO study from 2013 showed scenarios that range in the hundreds of millions of dollars, and suggested the costs would exceed the benefits.

During testimony Wednesday before the House Energy Policy Committee, Eric Baker, president and CEO of Wolverine Power Cooperative in the northern Lower Peninsula, said the project could be upwards of $1 billion because it would likely have to connect to areas farther west in the U.P. like Marquette or Escanaba.

But Baker, who spoke in support of the bill, said those costs could be spread among ratepayers over time. The average Wolverine customer could see charges of less than one dollar a month on their bill, he said.

During Wednesday’s hearing, some lawmakers and an industry group representing major utilities spoke in opposition over concerns about the bid process that’s outlined in the bill.

They argued that the bill is drafted with an unusually narrow scope for developers, blocking many entities from participating.

“We don’t want to slam the door on the concepts” in the bill, said James Ault, president of the Michigan Electric and Gas Association, a trade group representing investor-owned utilities like DTE Energy and Consumers Energy. “It spent so much of the (bill) language basically narrowing the potential for developers to participate. It just seemed unusual for this kind of legislation to be that detailed.”

Tom Finko, vice president for external affairs for Wisconsin-based American Transmission Co., said the bill should allow for “affiliated” transmission companies like ATC, a significant transmission operator in the U.P.

“We need to be part of the process,” he said. “We should be able to support our customers in the U.P.”

Ault also said that the process doesn’t fully account for whether generation alternatives might be less expensive and that the seven-member board would lack expertise. The distribution of potential costs among ratepayers is also a concern, he said.

Casperson and other lawmakers said they are open to addressing these concerns and substitute language is forthcoming.

Dan Dasho, president and CEO of Cloverland Electric Cooperative in the eastern U.P., said in an interview that he’s been part of the discussion and hopes to see it move forward.

“For us, we’re interested in improving the eastern-end infrastructure by making a better tie to the Lower Peninsula,” Dasho said. “What we need is a Michigan electric system that is well-tied together. The legislation sounds excellent to me.”

Baker, of Wolverine, also noted that a lack of transmission infrastructure is the underlying problem for the region’s energy issues. The cost, he says, is being used as a “scare tactic” to divert attention from larger issues.

“The lack of a robust transmission network is at the root of transmission and reliability problems in the U.P.,” he said. “Weak transmission in the eastern U.P. frustrates development of renewables there. This new link is vital to Michigan’s economy.”

Linda Blair, president of the transmission company ITC Michigan, is also supportive of the bill. ITC has also been part of discussions with Casperson, she said. As it’s written, ITC would be a qualified bidder on the project.

“It’s hard to justify it with the need presently in our region,” he said.

All of this is being driven by the energy crisis that emerged in the U.P. over the past few years involving an aging coal plant that was required to stay open despite its largest customer leaving for an alternative energy supplier.

Earlier this year, state officials announced a tentative deal in which the company, a large iron ore mining operation, would build a cogeneration natural gas plant to serve its needs.

“That just fixes that problem. It doesn’t fix the whole U.P. problem,” Casperson said of the deal.

“We do think the Upper Peninsula stands to be a powerhouse in the state,” Casperson added. “The opportunities here are enormous. I don’t think we should be taking them lightly.”