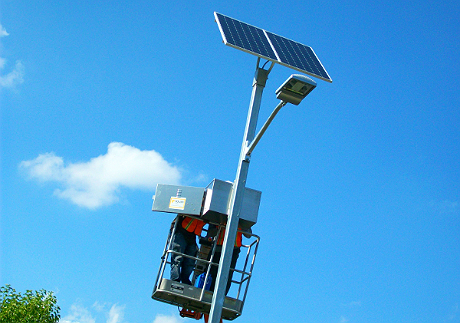 Residents of a Detroit-area community left in the dark after a utility settlement are hoping to re-light their streets using solar power.

Soulardarity, a coalition of businesses, non-profits, faith groups, municipal programs, block clubs and individuals in Highland Park, Michigan, is working to install up to 200 solar streetlights around the city to replace those that were removed by DTE Energy because of unpaid electric bills.

Highland Park, which is nearly surrounded by Detroit, has very much been dependent on its larger neighbor’s failing infrastructure as both cities have seen their populations dwindle. While Highland Park had some 50,000 residents after World War II, the population fell to just 11,000 in 2010 as automakers relocated, taking jobs with them.

In 2012 the Highland Park Water Department was closed and residents were placed on the Detroit water and sewage system, which consequentially increased the water bills. Some residents suddenly faced bills exceeding $1,000, including payment for past due bills.

With a smaller tax base the city was also unable to pay its electric bills, and in 2011 Highland Park reached a settlement with DTE Energy in which the city agreed to have more than two-thirds of its streetlights removed. These street lights were not only turned off, but decommissioned and even removed from the posts, and Highland Park recommended that residents use porch lights to provide illumination.

“This came after the city’s failure to pay a $60,000-a-month electricity bill resulting in a $4 million deficit owed to DTE,” said Carlos Windom, co-director of Soulardarity. “(DTE) forgave the debt by repossessing over 1,000 residential streetlights.”

From this crisis Soulardarity was formed around the idea of replacing the streetlights with community owned, off grid, solar powered street lights.

“We felt that if the community owned the asset, the corporation could never take it from us,” Windom said.

Over a four-year period, Soulardarity seeks to raise $1.5 million, engage in a participatory planning process, and launch a cooperative organization of Highland Park residents to manage the installation of 200 solar-powered streetlights. The group’s advisory board currently includes a core group of community leaders, while the paid staff works to move the project forward.

The proverbial light at the end of the tunnel is still a ways off, but progress is being made.

“So far we have two working lights, one in front of a residence and the other in front of a business, completely off grid, battery powered and have worked consistently through the night since installation,” added Windom. The first streetlight was installed in 2012.

The lights work similar to miniaturized lawn lights that draw in energy during the daylight hours and then automatically turn on at dusk.

“All the solar street lights are lit with an LED lamp, which uses 40 to 50 percent of the energy in an incandescent light,” said Jennifer Young, program manager at the Southeast Michigan Regional Energy Office. “This plan makes a lot of sense for Highland Park because it isn’t grid-tied and the lights have no operating cost. It is a great starting point for building the community and bringing people together.”

The battery packs in the solar lights are located just below the LED bulb and even on a cloudy day can generate more than enough charge by way of the solar panel located on top.

“That direct charge is stored in the battery until it’s needed and whatever is not used remains in the battery,” said Windom. “A cloudy day does not mean no sunlight. Germany gets less sunlight than we do (in Michigan) and they lead the world in solar lighting technology.”

The collective’s immediate mission is now to install upwards of 200 solar streetlights by 2017. This won’t totally light up the city, but it is a first step. The main focus is on residential lighting as many of the main streets are still reasonably well-lit.

The price tag for the project could exceed $1.3 million dollars; with each light costing $6,500 including assembly, delivery and installation. Currently Soulardarity is raising money through community events, networking and crowd funding efforts.

One notable concern is that in “rust belt” cities such as Detroit, scrappers have gone to great lengths and efforts to gather any metal – legally or otherwise. However, the design of the solar powered lights make them an unattractive target.

“A very determined, brave yet stupid thief would only attempt such,” said Windom. “Most thieves take only the copper wiring from lights that were installed almost 100 years ago. They do this with the help of jack-legged tools and small steel bars sticking out of the sides allowing them to climb up. Off grid solar lights have no copper wiring, no climbing accessibility and depending on the model, the battery pack is secured in a solid metal box high upon the pole or underneath a huge slab of concrete.”

This project could take Highland Park out of its “dark age” while at the same allow the city to be a proving ground for these types of innovative ventures.

“The new leadership in the city is trying to transform Highland Park into a center for high tech and new technology start ups,” added Young. “It is one of the reasons why Highland Park is a great test case for this technology.”

Peter Suciu is a Michigan-based freelance writer who has covered business and technology for numerous publications. He can be reached at petersuciu@gmail.com.