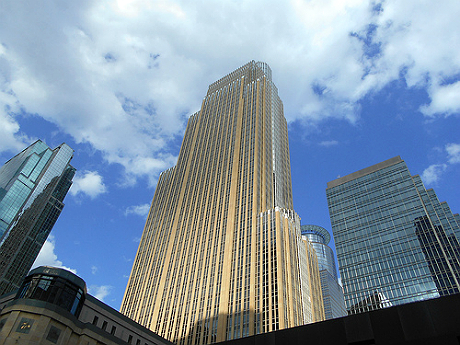 A new report from Minneapolis officials finds that large office buildings are among the city’s most energy efficient.

The city’s second Energy Benchmarking Report details the 2013 energy and water use of 365 properties in Minneapolis. The study included 68 large privately owned office buildings — defined as 100,000 square feet or more — that collectively had a median Energy Star score of 87 out of 100.

“They are usually fairly well-managed buildings with professional energy managers whose full time job is to look at this stuff,” he said. “They compete on a national basis and want to be energy efficient.”

Minneapolis was the seventh city in the country and the first in the Midwest to pass a building benchmarking and transparency ordinance in 2013. This is the first benchmarking survey in which public buildings submitted data.

The White House and U.S. Department of Energy recognized Minneapolis and Xcel Energy this week for creating a web-based tool that captures whole building data. The software removes the need for manual data entry of energy bills and collected from tenants, according to a press release.

The software tool is a result of the Clean Energy Partnership Minneapolis forged with Xcel Energy. The city and Xcel are among 19 cities who have city-utility agreements to create data tools to help building owners improve operations while saving money and energy.

The city’ inaugural benchmarking report — published in 2013 — used 2012 data from 102 buildings owned by the city and by government bodies which had voluntarily submitted energy use information, among them the Minneapolis Park and Recreation Board, Minneapolis Public Schools and Hennepin County.

The city believes the ordinance and the publication of data will promote energy efficiency, lower energy costs, create jobs and reduce pollution and water use. It’s also a component of the city’s Climate Action Plan that calls for reducing greenhouse gases 30 percent by 2025 (using 2006 baseline levels).

The report also revealed a modest goal of improving energy efficiency by 10 percent in the buildings surveyed would remove more than 62,000 metric tons of greenhouse gases and save $11 million in energy costs.

“I was surprised by the scale of the potential savings we could have — even if we just do that 10 percent — in terms of cost and emission savings,” Slotterback said.

The survey revealed that of the private commercial buildings more than half were above average in Energy Star ratings. The lowest scoring buildings were medical offices (an average Energy Star score of 15) and hospitals (average score 35). Those buildings are open longer, have special lighting and sophisticated equipment that drives higher energy costs, he said.

The buildings benchmarked in the report represent 26 percent of the commercial and industrial GHG emissions in the city. (All told, buildings represent 47 percent of Minneapolis GHG emissions.) They include 98 million square feet and use enough energy to power 47,000 homes.

The Energy Star median score was 64 for all buildings in the survey, which included  public properties of 25,000 square feet or larger.

Some public buildings are outstanding, while others need work. “They’re all over the map,” Slotterback said.

The report found retrofitted buildings can score as highly as newer structures. The Minneapolis City Hall, circa 1888, received an Energy Star rating of 94, the fourth highest among public buildings. The building has been significantly upgraded upgraded over the past several years.

The majority of the top 10 highest performing buildings in the survey were owned and operated by Hennepin County. Leah Hiniker, energy manager, said the county buildings have had recommissioning studies done, added improved lighting efficiency and controls, upgraded building automation systems and kept a keen eye on general operations and maintenance.

One simple move that saved a great deal of energy was to have janitorial work conducted during the day rather than at night. That allows the county to turn off heating and cooling systems at 6 p.m. every night in most buildings, Hiniker said.

“There’s nothing groundbreaking with what we’re doing, it’s more about staying on top of everything,” Hiniker said.

Energy benchmarking allows building owners to see how they compare with their peers and may even ignite some friendly competition, she said.

“It’s benefited Hennepin County to know how well we’re doing and we’ve shared that success story with others,” Hiniker said.

The city’s benchmarking ordinance uses a graduated schedule to capture energy data. The next group that will be added to the scorecard are buildings of 50,000 to 100,000 square feet. They have to report their energy use in 2014 by this June, Slotterback said, with a report due in fall.

The median Energy Star score for the city will likely drop to around average following the addition of smaller buildings to the benchmarking report.

There are other subtle changes coming in future reports. In 2016 every building covered by the ordinance — private buildings of 50,000 or more square feet and city buildings of more than 25,000 square feet — will be identified by address.

While only public buildings owned by Minneapolis are required to report energy data the government agencies that agreed to voluntarily participate continue to do so and have added more buildings in their portfolio to the database.

The building benchmarking concept is catching on. Now 13 cities, two states and one county require it, with Atlanta and Portland being the latest to have passed ordinances similar to the one in Minneapolis.

The benchmarking report has been instructive for the city. “The intention of the work and the ordinance is to inform us as to where improvements can be made and where we need to target outreach and investments,”  Slotterback said.