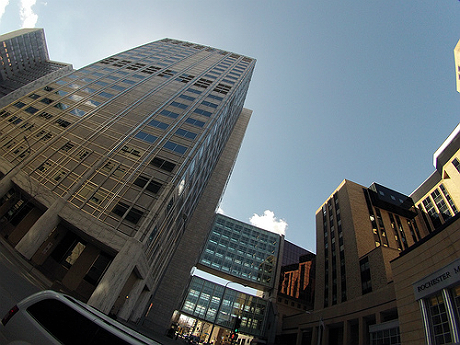 Buried deep in the nearly 700 pages of the ambitious $6.5 billion plan for Rochester, Minnesota’s Destination Medical Center is a small nod to the issue of energy and the source of what will be powering the one of the largest development projects in the state’s history.

With a $585 million assist from the state, Rochester hopes the investment will stave off competition from larger cities with world renowned medical centers – such as Baltimore and Cleveland – while turning a city that often feels more like a suburb into place of vibrant urban neighborhoods.

The problem for environmentalists and clean energy activists is that Destination Medical Center Corporation (DMCC), a nonprofit charged with leading development in the district, has not yet dealt with the sticky issue of the city’s reliance on carbon-based power.

At public meetings leading up to the council’s approval, residents suggested the continued reliance on fossil fuels could have negative impacts on the city’s health, economy and environment. A city powered by fossil fuels where one of the world’s great health institutions is headquartered will not look all that good to potential patients and investors, either, they argue.

Several pages of the report focus on water and waste management, energy efficiency and building standards. However, the sustainability section is more about goals and less about road maps for reaching them.

Rochester Public Utilities (RPU), which provides electricity and water to the city, receives nearly all of its power from the Southern Minnesota Municipal Power Agency (SMMPA). The agency generates and buys electricity for sale to 18 non-profit municipal utilities – with 96,000 residential customers and nearly 13,000 businesses — from Austin and Owatonna to Grand Marais and Redwood Falls.

Its largest customer is RPU and the relationship has not always been a smooth one. RPU sued SMMPA several years ago and lost in a complex case over how much it would have to pay for new generation facilities.

Rochester’s city-appointed Energy Commission reports 80.5 percent of the city’s power comes from fossil fuels, half from coal, half from natural gas. Nearly 12 percent comes from renewable energy, while the rest is generated by nuclear.

While SMMPA generates some power the majority of its energy comes from Xcel Energy’s coal-fired Sherco plant. It owns around 43 percent of Sherco 3, a plant that reopened in early 2014 after being closed 22 months due to a malfunctioning generator. The repair cost $200 million.

Anna Richey, a Conservation Minnesota community coordinator, says the city’s reliance on fossil fuels “is not the best message to send.”

“Very rarely does a city have an opportunity to remake itself with public and private funds in the fray, so doing it right the first time would really make a difference.”

Two Midwest health clinics with growing national reputations for making sustainability part of their framework are the Gundersen Health System in LaCrosse, Wisconsin, and the Cleveland Clinic in Ohio. Gundersen announced last year that it had become the first health care system in the country to produce more energy than it consumed through energy efficiency, a biomass boiler, geothermal heating, wind and solar.

Gundersen branded the program Envision and consults with clients on how they, too, can create sustainability programs that reduce waste, energy consumption and create renewable energy opportunities.

Cleveland Clinic, meanwhile, has strong energy efficiency goals, partners with the federal government’s Energy Star program, plans to reduce energy use by 20 percent by 2019 and has installed solar on one building. An Environmental Protection Agency official has called the clinic’s energy management system “a national model.”

Both health care systems have used sustainability to fundraise and found “gifters and benefactors like to see this,” Richey said.

Rochester city council member Michael Wojcik, who serves on the city’s Energy Commission, believes a good start for the DMCC would be to put in place energy conservation measures – such as the U.S. Green Building Council’s LEED program — for new buildings.

Wojcik also would like to see the city hire a sustainability director to create more momentum for a greener infrastructure. The position could potentially be shared with the DMCC.

“We have no function aimed at sustainability – environmental, social and financial — yet our population has grown significantly,” he said. “We haven’t focused on this area.”

RPU, for better or worse, is locked into a contract to buy power from SMMPA until 2030. Andrea Kiepe, a Sierra Club organizer, believes Rochester has a chance to fill part of the demand generated by new DMC buildings with renewable energy and a push for more efficiency.

The company will have 17 percent of its power coming from renewables by 2016 and remains on track to meet its state renewable energy standard (RES) goals, said Hayes. Sherco will still provide more than 80 percent of the power for the foreseeable future but Unit 3 has better emission controls — because it is newer — than other coal plants in the state, he said.

An announcement will come soon naming a developer of a 5 MW solar project for SMMPA. Hayes believes it is the largest solar project of any municipal power provider in the state and it allows participation of all ratepayers. SMMPA sees the project as community solar, even if no customers will be buying panels.

Other renewable initiatives include a long-standing green pricing program and another allowing clients to buy renewable energy credits (RECs), he said.

SMMPA does not “have plans to move away from (coal)  but we’re adding renewables and we’re taking a proactive approach to solar,” he added. “We believe in renewables and we think we’ve been a leader in munis in Minnesota.”

For its part, RPU is looking at a 500 kW solar installation on its property and has existing sustainable energy sources, among them hydro. It would only provide a written statement for this story.

Mayo has signed on to the Clinton Global Initiative that calls for participating members to reduce energy by 20 percent by 2020.So far, the clinic has seen energy use drop by 8 percent and Gorden believes reaching 20 percent by 2020 is obtainable.

The clinic was far ahead of most communities and hospitals in using combined heat and power for 25 downtown buildings and the St. Mary’s Hospital campus. It also uses steam from RPU’s Silver Lake Plant, once a coal-fired facility that has transitioned to natural gas, Gorden said.

A 148 kW solar installation sits on top of one of the clinic’s parking structures and that may grow depending on how the DMC’s energy plan evolves, Gorden said.

Amanda Holloway, who works in facilities’ operations, said Mayo has no policy yet as to how energy efficient new buildings must be.

“We’re still trying to figure that out, and how energy fits into the DMC,” she said.  “We haven’t chosen any (building) spec yet. We’re waiting to see the DMC’s energy plan.”

A more aggressive push toward renewable energy would have to come from the DMCC. Although the initial plan had little in the way of energy planning the DMC’s executive director, Lisa Clarke, said “sustainability and energy are important and critical to realizing the DMCC mission.”

The DMCC board is looking into the prospect of a district heating system for the downtown area that is slated for development. The six districts planned for the DMC will be a dense, walkable environment with many transportation options, and will have an energy plan designed with help from Hammes Company, a Wisconsin-based consulting firm.

Keith Rowan, project manager for Hammes, said an energy plan will explore several renewable energy sources to determine which mix may work. Utilities, of course, will be involved in studying the energy that will fuel the DMC in the future, as will governmental units, Mayo and private industry.

The DMCC has the basis of a “Sustainability Plan” and is working city, county, state and utility representatives on how to reach the following goals:

Now the that main parts of the plan are completed the energy component will come into play. “We’re starting to work together to put these goals into actions, starting today,” Clarke said.