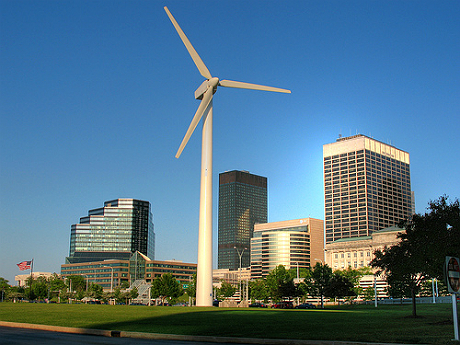 After a one-two legislative punch last year brought wind energy in Ohio to a standstill, advocates, developers and even some Republican lawmakers are pushing back, citing economic benefits.

As Ohio wind energy supporters seek to ease “devastating” setback limits, the industry has also joined with the Office of the Ohio Consumers’ Counsel to urge lawmakers to restore the state’s energy efficiency and renewable energy standards.

Both Tom Vinson of the American Wind Energy Association and Ohio Consumers’ Counsel Bruce Weston testified before the Energy Mandates Study Committee last Monday in support of ending the “freeze” imposed last year on those standards.

According to supporters, growth of in-state wind energy can provide big benefits to local taxpayers, schools and businesses, while also attracting new businesses to Ohio.

Both Weston and Vinson urged the Energy Mandates Study Committee to reinstate the energy efficiency and renewable energy standards whose benchmarks were frozen last year by Senate Bill 310.

Although Weston’s materials did not state how much consumers pay under the renewable energy standards, Vinson’s testimony noted data from the Lawrence Berkeley National Laboratory, showing that the costs generally range from $0.59 to $3.25.

“It’s less than the price of a gallon of milk,” Vinson told Midwest Energy News. “The rate impact is not that large, even if you look at a worst-case scenario.”

Indeed, Ohio consumers “give more money to other riders that pay the electric bills for Ohio’s largest businesses, than we are paying for energy efficiency and renewable energy combined,” noted Dan Sawmiller of the Sierra Club’s Beyond Coal campaign. Sawmiller, who was not a witness last week, previously testified about various riders when SB 310 was under review by the Ohio House of Representatives.

Vinson’s testimony before the Energy Mandates Study Committee also noted that the levelized costs for wind energy have dropped roughly 58 percent since 2009. The levelized cost aims to capture all factors for an energy resource, including its capital costs, operating costs, fuel costs and any subsidies.

So, Vinson was asked, if wind energy is such a good deal, why does Ohio still need mandates?

“There are benefits of wind energy that are not fully recognized by electricity markets, so developers can’t monetize some of the benefits,” Vinson explained.

In his view, those factors provide benefits not just to customers, but to ratepayers as a whole. Among other things, Vinson said, wind provides a “hedge value” against the possibility that fuel prices will rise for other types of electricity generation.

Glen Thomas of the PJM Power Providers Group particularly criticized “out-of-market subsidies,” including energy riders, as having the potential to cause “a clear, distorting effect on competitive markets.”

As Vinson sees it, however, distortion doesn’t happen as a result of renewable energy standards. That’s because the price is determined by the most expensive resources that clear the PJM capacity auction, and wind tends to be among the lowest priced resources.

In Sawmiller’s view, the standards are also necessary to cure a flaw in the current market structure.

“With the lack of true corporate separation in Ohio, our regulated distribution utilities have a natural incentive to make decisions that are more beneficial for their generation affiliates, than they are for customers,” Sawmiller observed. “That means less investment in cleaner sources of energy than the market would otherwise be delivering.”

“State standards on energy efficiency and renewables create a floor—a level playing field—to ensure that utilities do what’s best for consumers and deliver at least a portion of their energy through these least-cost, clean resources,” agreed Samantha Williams, an attorney with the Natural Resources Defense Council. “Without those requirements in place, the utility business model interferes and makes it hard to guarantee that clean energy will move forward.”

Those new setbacks of roughly 1,300 feet “proved fatal to wind development in Ohio” and have been “absolutely devastating to projects,” said Terrence O’Donnell, a Columbus attorney with Dickinson Wright, who represents wind energy companies.

The Ohio Power Siting Board generally deemed the former setbacks sufficient to protect adjoining property owners, observed Burkley, who co-sponsored HB 190. The new requirement seems like “a number pulled out of the air,” he said.

In his view, the new setbacks are not only unnecessary, but they also unreasonably restrict the rights of any property owner who would want to lease property for wind turbines. Most of the land that might otherwise be leased could be “pretty much swallowed up by the setbacks,” Burkley said.

“I think Ohio should move in the direction of an all-inclusive energy program.” Burkley stressed. In light of last year’s legal changes though, “Ohio seems to be moving away from that.” And counties lose out, in his view.

“My area had significant increases in revenue as a result of alternative energy,” Burkley noted.

Susan Munroe, who heads the Van Wert Area Chamber of Commerce, agrees. Millions of dollars have poured into the area as a result of its wind farms, she says. “Schools are perhaps the biggest winners.”

Lincolnview School District in Van Wert County got $400,000 last year from wind projects, and another new project would have brought in an additional $600,000. However, that new project was stopped by HB 483. “We were crushed by that,” Superintendent Jeff Snyder said.

Supporters believe that a strong market for renewable energy can also fuel other business growth.

Amazon Web Services, for example, aims to meet 40 percent of its global energy demand with renewable energy by the end of 2016, with an eventual goal of 100 percent renewable energy usage. And aside from its own philosophy, the company’s own customers have been pressing to see progress towards its renewable energy goals.

On May 29, Amazon announced plans for a new data center with approximately 1,000 employees in central Ohio.

According to wind industry experts, other companies with clean energy policies are likewise eyeing Ohio. “We believe there are other serious targets out there as well,” O’Donnell said.

“It’s important that they have the opportunity to purchase wind energy here in Ohio,” added Dayna Baird Payne of Government Edge, whose lobbying clients include the American Wind Energy Association.

In Burkley’s view, buying that energy can also make good business sense for many companies. With a 20-year contract, “they have a locked-in energy cost for that period of time,” he said.

Interestingly, at the press conference announcing the Amazon decision, Gov. John Kasich remarked that in Ohio, “We love advanced energy.”

“Rightly so,” noted attorney Samantha Williams at the Natural Resources Defense Council. But, she said, the timing of Amazon’s decision was “ironic.”

“Ohio just last year passed both the freeze and wind setback bills,” she said, sending a message to investors “that the state’s clean energy industry is not open for business.”

“The only sure way to build long-term success in attracting these multi-national companies seeking to site data centers and other energy-intensive facilities in the Buckeye State is to reinstate our clean energy standards and pass HB 190,” she said.

The Natural Resources Defense Council and the Sierra Club are members of RE-AMP, which publishes Midwest Energy News.