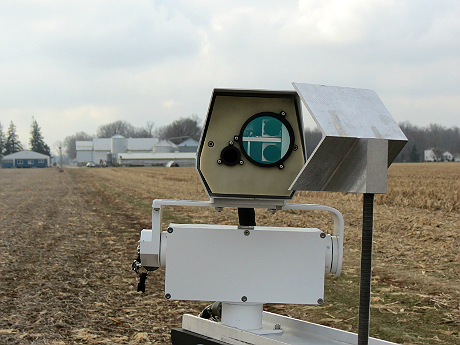 A laser technology capable of detecting carbon dioxide emissions in near real-time is being tested above ground at an Illinois carbon sequestration site.

If successful, the same technology could help pinpoint the sources and determine the quantity of carbon dioxide and other greenhouse gases over entire cities, its proponents say.

The tests are being conducted through a U.S. Department of Energy-funded program known as the Greenhouse Gas Laser Imaging Tomography Experiment (GreenLITE). The underlying laser technology was developed by Fort Wayne, Indiana-based Exelis Inc., which last week was acquired by the Florida-based Harris Corp.

Launched in February but announced publicly on May 27, the $2.09 million GreenLITE project is monitoring the Illinois Basin-Decatur Project (IBDP), where CO2 from an Archer Daniels Midland ethanol plant has been piped 7,000 underground and stored in a special perforated steel-and-cement encased well, which is designed to gradually release the gas into permanent subterranean rock formations.

The results, so far, are good.

“There is no detection of emissions associated with the carbon sequestration, ”said Jeremy Dobler, a Harris senior solutions engineer. “It isn’t leaking,”

Bill Aljoe, a project manager with the DOE’s Strategic Center for Coal, said that preliminary GreenLITE tests were conducted last fall at the University of Montana in Bozeman. The technology proved so sensitive, he said, that it picked up trace amounts of CO2 being respirated from ground vegetation.

The Bozeman site is tightly controlled—specified quantities of CO2 were intentionally released to see if GreenLITE would detect it. GreenLITE passed those tests, Aljoe said.

Sallie Greenberg is principle investigator for the Midwest Geological Sequestration Consortium (MGSC), the office within the University of Illnois’ State Geological Survey that did the carbon dioxide sequestration in partnership with ADM at the Decatur site. DOE funds MGSC’s work.

Over the past three years, Greenberg said, MGSC has injected 1 million metric tons of sequestered CO2 for the ADM ethanol plan into the underground sequestration well. MGSC ceased injecting new CO2 last November. Now the site is being monitored for CO2 seepage.

The GreenLITE experiment complements MGSC’s own CO2 monitoring program, which utilizes both underground and above-ground detection methods, Greenberg said. She is not privy to Harris’ preliminary data, but does not doubt the accuracy of claims that GreenLITE has thus far detected no CO2 leaks.

“If those are their preliminary findings, they are in line with our findings,” Greenberg said.

GreenLITE works by shooting a series of crisscrossing laser beams about 10 feet off the ground. The beams are shot at mirrors, which reflect them back to be analyzed.

Laser beams contain various light wavelengths, some of which are absorbed by CO2 molecules. CO2 emissions are detected when those particular wavelengths are missing when the laser beam is reflected back. The same technology can be used to detect methane and other airborne pollutants, Dobler said.

Other technologies exist to detect surface level CO2, said Eric Webster, a Harris environmental intelligence vice president and director. But they usually require that a worker walk around a site with a handheld “sniffer” device. Data collected that way must be brought back to the lab and analyzed, a process that can take weeks.

GreenLITE gathers, records and analyzes data in near real-time, making a historical record as it goes. Dobler said last week that in 63 days of near-continuous operation, GreenLITE compiled 30,000 two-dimensional “tomographic reconstructions” of the Decatur site.

Aljoe said that GreenLITE has the potential to make a “vital contribution” in the government’s effort to curb greenhouse gases.

“It is very difficult to tell the public that the CO2 is staying in the ground by reporting data that is collected from thousands of meters down,” Aljoe said. “Call it assurance monitoring, if you will. The best thing that can happen with this technology is that it never finds anything.”

Aljoe said GreenLITE is one of a portfolio of surface, subsurface and atmospheric technologies being tested at DOE’s six carbon sequestration partnership sites. “Essentially, we are learning by doing,” he said.

Webster said his company is in talks with the National Institute of Standards and Technology (NIST) to perform GreenLITE-style tests at Boulder, Colorado, in an effort to monitor greenhouse gases across a large-scale urban environment.

Ultimately, Webster said, he hopes the GreenLITE technology will work in concert with other climate-related ground-, air- and space-based monitoring programs that his company has developed. Those include technology used for NASA’s space-based Radiation Budget Instrument, among others. GreenLITE itself originally was developed for airborne and space deployment, he said.

“The idea is if you combine a detailed monitoring of a city or region from the ground, you can then get a space, air and ground delineation of what is happening,” Webster said. “So the whole ability to project and understand what is happening with carbon dioxide and other greenhouse gases really comes into focus.”

The GreenLITE tests will continue in Decatur through Sept. 30.

Kevin Featherly is a Bloomington, Minnesota-based freelance writer who covered has public policy, business and technology for several dozen publications. He can be reached at klfeatherly@gmail.com.

Editor’s note: Exelis was misspelled in an earlier version of this story.