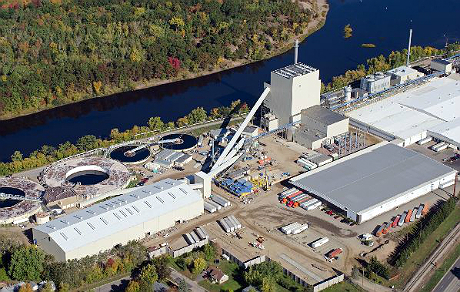 (Image via We Energies)

When the Rothschild Biomass Cogeneration power plant in northern Wisconsin was announced by We Energies in 2009, it was billed as a form of renewable energy that would burn wood waste from local logging, sawmill and paper operations to generate electricity for ratepayers and steam for the nearby Domtar Rothschild paper mill.

As a 50 MW baseload plant, it was projected to run at about 70 percent capacity, a scale similar to a small coal plant.

Between December 2014 and April 2015 the plant sent almost no electricity to the grid, according to We Energies spokesman Brian Manthey. Reports filed by We Energies showed negative generation, meaning the plant consumed more energy than it generated. Manthey said that within the past few weeks, a small amount of electricity has been generated and sent to the grid.

The plant has been selling enough steam to the Domtar plant to meet the mill’s needs. Domtar pays We Energies for the steam and Domtar also arranges the purchase of the wood waste to fuel the plant.

Manthey said that under recent conditions it has not been financially viable for the plant to send electricity to the grid. With natural gas prices and low demand driving electricity prices down over the last few years, the Rothschild plant cannot generate electricity cheaply enough to be viable.

“To run the plant would have been more costly than other options like running our natural gas plant or buying power on the market,” Manthey said. He noted that the plant was also way-laid because of equipment problems, that have now been resolved under warranty.

Critics and watchdogs – namely the Citizens’ Utility Board and Renew Wisconsin – say the plant is an ill-advised boondoggle that essentially amounts to ratepayers footing most of the bill for a $268 million plant that is serving largely just to provide steam for one private company.

The plant construction was subsidized by a $75 million federal grant, and Domtar paid $47 million of the construction costs, Manthey said. So ratepayers were ultimately responsible for about $145 million.

Ratepayers are also paying for the fuel, a total cost of about $2.3 million through April 2015. Manthey said that when the plant makes only steam and not electricity, Domtar shares the cost of the fuel; although the proportion they pay is kept confidential.

In a 2010 filing with the state Public Service Commission, which approves new power plants and their rate structures, CUB advised the commission to veto the plant.

“Electric ratepayers paid the bulk of the cost to build the thing and pay the bulk of the fuel costs, and it’s just being run right now for the steam customer,” said CUB executive director and general counsel Kira Loehr. “This is exactly what CUB warned would happen. We anticipated that the fuel costs would be much higher than We Energies was saying, and we projected this would not be economical to run for electricity.”

A bad choice or a good investment?

Manthey countered that it is short-sighted to judge the plant on its performance so far. The plant has a life span of more than 40 years, he said, and electricity prices could go up enough to make it viable.

“Judging it by one year, rather than how it’s going to fit into overall generation and renewable generation” is unfair, Manthey said. “The plant will be called on to run in some high demand periods, if we have heat waves or in winter if we need something other than natural gas.”

In the 2010 brief it filed as an intervenor in the case, CUB argued that the Rothschild plant “is more expensive than a comparably-sized wind farm under nearly every economic analysis in this record.” It said the cost for the plant would be $189 million greater than for a similarly-sized electricity-only plant, though the federal grant would have helped offset this cost difference.

CUB also warned that if Domtar were to cancel its steam contract and get out of the deal before costs were paid off, ratepayers would have to bear even more costs. And CUB argued that the plant was adding baseload to a system that already had more than enough baseload power.

When the plant was planned and approved, Manthey said, “all of the information was scrutinized and thoroughly reviewed, understanding there would be times that market conditions would lead to the plant not providing a lot of electricity into the grid.”

He pointed to the expansion of We Energies’ Oak Creek coal-burning plant near Milwaukee. Critics had decried the massive expansion of the Oak Creek plant a decade ago, saying it wasn’t an economical investment and that there were better, cleaner ways to generate more electricity.

Manthey said the Oak Creek plant’s performance in 2014 proved its worth. It was a key electricity provider and “work horse” during cold snaps that disabled some natural gas plants. He thinks the Rothschild plant will similarly turn out to be a valuable addition for ratepayers.

Cogeneration plants that use the waste heat from electricity generation to make steam are considered a wise power choice, promoted by the federal government and energy efficiency advocates (the plants are also known as combined heat and power, or CHP). Many paper mills run their own cogeneration plants, which has helped many stay competitive.

The We Energies plant is different in that it was built and is run by the utility, with the costs passed on to ratepayers. If it is not generating electricity, ratepayers are not getting their money’s worth, as critics see it.

The amount and cost of the steam that Domtar buys is confidential, Manthey said. Experts say that steam rates are comparatively low and that selling steam to one customer is not a good use of ratepayer funds.

“If you’re a paper mill and put in cogeneration to provide your plant electricity and steam, that’s an ideal arrangement,” said Renew Wisconsin program and policy director Michael Vickerman. “You would get much more value from that investment than you would from building an electricity-only or steam-only system. From an engineering perspective it’s a good thing to do.

“But what we’re seeing here is when the utility owns the generating system and the steam host is one or a couple customers, there can be a significant disparity in the benefits from the arrangement.”

At a typical cogeneration plant, including Rothschild, fuel is burned in boilers to make steam, then that steam can be run through a turbine to generate electricity as well as being used by the paper mill or other industry.

Manthey said that We Energies did not run the turbines at all during most of the winter and spring, because when the plant makes only steam then Domtar shares in the fuel costs, but when it generates electricity then ratepayers would pay the whole cost of the fuel.

We Energies has argued that the Rothschild plant is an important part of its renewable energy portfolio, and that it will help the utility meet its obligations under the state Renewable Energy Standard.

Vickerman said that since the plant is not sending electricity to the grid, he wonders how it can help the utility meet its renewable goals and whether their compliance with those goals is in jeopardy.

“What’s the point of building clean generation when it doesn’t run – especially expensive clean generation,” he said. “It does not help the environment to have a plant like that standing by twiddling its thumbs waiting for the right moment to get fired up. It’s a travesty of public policy.”

Meanwhile there is debate over whether plants that burn biomass should really be considered “renewable.” The woody scraps and debris would otherwise likely be landfilled, so the plant is basically using waste as fuel. However burning woody biomass creates carbon emissions and air pollution, so some people don’t see biomass plants as a source of “clean” energy.

We Energies has noted that the plant is helping to bolster the local economy and jobs, by its relationship with the paper mill and also by purchasing the woody waste from surrounding businesses. Domtar employs about 400 people and the companies had predicted that the woody waste supply chain for the plant would support about 150 jobs. The plant construction created about 400 temporary jobs.

Domtar spokesman Craig Timm said the cogeneration plant replaces four small old boilers that the mill had used to make steam. Domtar employees run the steam boilers at the cogen plant. Domtar also pays a portion of the operating costs of the plant, Manthey said, he declined to say how much.

“Domtar benefits by having a state-of-the-art facility which improves environmental performance and keeps us competitive with manufacturers of paper,” said Timm of the cogeneration plant.

Loehr said the cogeneration plant “certainly is a benefit to the paper mill.”

“And because We Energies makes more money itself when it builds expensive capital projects, it’s also a benefit to the company [We Energies],” she said.

Loehr said an investigation should be opened to consider how to proceed in ratepayers’ best interest.

“Public utility law says plants must be used and useful to be required to be paid for by customers,” Loehr explained. “The argument is this plant is not used and useful for electric customers so they should no longer pay for it.”

Renew Wisconsin and Citizens’ Utility Board are members of RE-AMP, which publishes Midwest Energy News.