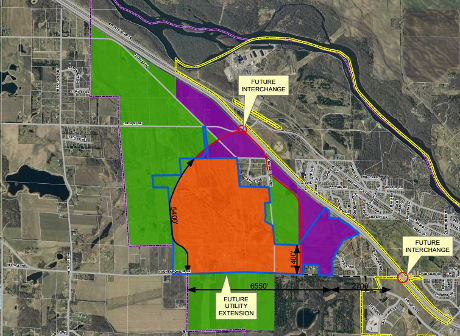 This map shows a proposed solar garden location (orange) in the middle of areas proposed for development in Monticello, Minnesota. Courtesy City of Monticello.

Located on Interstate 94 northwest of Minneapolis, suburban Monticello has grown rapidly over the last several years. As part of a plan to manage that growth, Monticello has focused on a 600 acre parcel it calls the Northwest Area.

Then the solar developer Sunrise Energy Ventures came to town to propose using the land for a community solar garden that would be among the largest ever proposed in Minnesota.

The project could be as large as 50 MW, and would take over the Northwest Area for at least 25 years.

“This huge solar field is right in the way of where we expected to grow the city over time,” said Jeff O’Neill, Monticello city administrator. “That’s where we’ve planned the urban footprint for the city for the foreseeable future.”

Monticello’s struggle points to the growing issue of the planning and zoning of large-scale solar projects around the state. The community solar program — now stalled due to a dispute between Xcel Energy and developers — could bring more than 430 MW to the grid if every proposal gets built (and at least 80 MW if Xcel gets its way.)

Nearly 300 MW of utility-scale solar farms have been approved and Xcel has an ambitious goal of adding 2,300 MW of solar by 2030. Many of the installations have been, and are, occurring in mostly rural areas where counties and cities may not even have an solar permitting ordinance.

“Every county, and many cities, should have an ordinance to direct solar development specifically to where they want it to go and where they don’t want it to go,” said Brian Ross, senior program director at the Great Plains Institute and author of a model solar ordinance developed for the Commerce Department.

“In the big picture solar is an enormous opportunity,” he said. “They’re reaping a local resource for economic value that is underutilized. But like any other kind of development it has a downside and we have to address that in a way that is respectful of the community standards that doesn’t create ill will for the industry.”

Counties and cities have to be careful when zoning for solar farms because they could potentially take out of production land more valuable as commercial, industrial or residential development, Ross said.

“Cities do not necessarily benefit from the solar garden development from a tax base basis,” he said. “They get far better return on almost any other development that occurs there, either commercial, residential or industrial.”

In a letter Monticello submitted to the PUC, city officials said revenue generation of a solar array would provide only 5 to 12 percent of the revenue it would receive from other development.

That means that Sunrise Energy Ventures would likely pay $240 per acre in property taxes annually compared to the following per acre payments: townhouses, $2,475; warehouses, $3,500; retail establishments, such as a big box merchant, $4,500.

Ross notes that even with lower tax returns, solar farms require little infrastructure or maintenance, offering cities an inexpensive development that can pay for itself.

Nevertheless, he suggests the best option for most communities in locating solar farms is to put them on the worst land. Brownfields, former gravel operations and buffer zones between industrial and residential areas all make good potential solar sites, Ross said.

What communities do not want is a solar farm separating built-up and expanding areas, causing “leapfrog” development and increasing the cost of infrastructure, he says. Since solar farms pay little compared to other developments, those costs will be picked up by other taxpayers and businesses.

Monticello, a city of 14,000, is home to one of the state’s only nuclear plants and is no stranger to energy development.

“We would love to have it in our backyard, not our front hallway,” O’Neill said. “We’re saying be wise with how you do it.”

The city has offered other sites to Sunrise Energy, however they are outside Xcel’s territory, which would violate a provision of the community solar law.

The location of the land Sunrise Energy wants to build on is called an “orderly annexation area” that Monticello sees as its next frontier for future commercial and residential growth. Much of the land, around 400 acres, was once a public golf course that was sold in 2008 for a residential development that never happened due to the recession, he said.

With a planned expansion of I-94 to three lanes each way, city staff and leaders believe the land could be on the cusp of investment.

In the meantime, with the prospect of a solar farm looming, the city has spent $29,000 in staff time trying to determine how the roads, utilities and other infrastructure would work if the project receives approval.

O’Neill and the city laid out their objections in documents submitted to the PUC and the Commerce Department. Even the benefits, O’Neill said, are questionable. The city would receive investment tax credits but the majority of them, 80 percent, would accrue to the county, for example.

While Sunrise Energy has argued that the city has plenty of other land available for development, O’Neill countered by pointing out the Northwest Area “is prime and is best poised for the kind of development the community desires.”

In most cases the city would have zoning power over a solar project but once a project rises above 50 MW it goes for approval before the Minnesota Public Utilities Commission. Sunrise recently told a city council meeting that the the size could be anywhere from 35 to 50 MW.

Some critics say Sunrise Energy is trying to avoid having to deal with local planning and zoning ordinances by making the project so large it will come under the PUC’s jurisdiction.

For now Monticello has put a moratorium on future solar farm projects while it crafts a future solar ordinance.

Developers have worked closely with other communities to avoid the kind of conflict that has emerged in Monticello, among them North Branch, where a 100 MW solar array will be built southeast of the city by a Pennsylvania company, he said.

Attempts to reach Sunrise Energy were unsuccessful. A recent Monticello Times article detailed a city council meeting that laid out the finer details of the debate.

Three municipalities employed the model ordinance Ross wrote while tweaking it to their own geographic circumstances.

Angie Berg, land use supervisor in Stearns County, said her office zones for both the county and about half its townships. The county was among the first in the state to have a solar ordinance because it had a need for one — St. John’s University built one of the larger solar gardens in the state at the time in 2009.

It’s hard to keep up with the changes. “The counties really aren’t sure what their ordinances should look like because the industry’s changing and state legislation is changing,” she said. “We were the first to have solar standards and we will be the first to amend them.”

Amy Kowalzek, planning and zoning administrator for Morrison County, said her jurisdiction did not have a solar ordinance until Geronimo Energy submitted a 10 MW project in Little Falls Township. After receiving the proposal in 2013 the county passed a solar ordinance six months later.

“At the time we had inquiry we did not have any ordinance standard for solar,”  Kowalzek said. “We addressed wind, but not solar.”

The comprehensive plan called for support of solar so the county created an ordinance, based on Ross’s model, with some modifications.

The county board added measures to insure solar projects would not create glare issues that could impact pilots flying in and out of the National Guard’s Camp Ripley.

It sought to have a thorough review of environmental considerations. “We have a lot of wildlife management areas and wetlands,” she said. “We didn’t want to create any wetland act violations after permitting a project.”

Rosemount updated a solar ordinance last year after receiving a permit request from Geronimo Energy for a 21 MW solar farm that is part of the company’s 100 MW multi-site Aurora project.

Jason Lindahl, the city’s planner, said large scale solar, especially community gardens, is new to communities in the state. Though developers have come with great interest in building community solar in Rosemount, nothing has yet reached the proposal stage.

In looking at solar ordinances Lindahl suggests that “after having one large facility come through I would say other communities may want to consider some sort of standard for size in their ordinance, a geographical or wattage size.”

The state also has been well aware of the issues new solar installations can create. The Commerce Department appointed a working group that studied solar zoning issues it an issued a report suggesting, among other proposals, that the state permit any projects 10MW or larger.

Geronimo’s Nathan Franzen said his company to tweaked power outputs and made site modifications to reach a consensus with different governmental jurisdictions during the planning of the Aurora project.

Having a model ordinance that communities could adopt and modify “worked pretty smoothly once we started,” Franzen said. “Having an ordinance made our job all that much easier.”